Roman “Chocolatito” Gonzalez vs. Pedro Guevara on December 8 on HBO 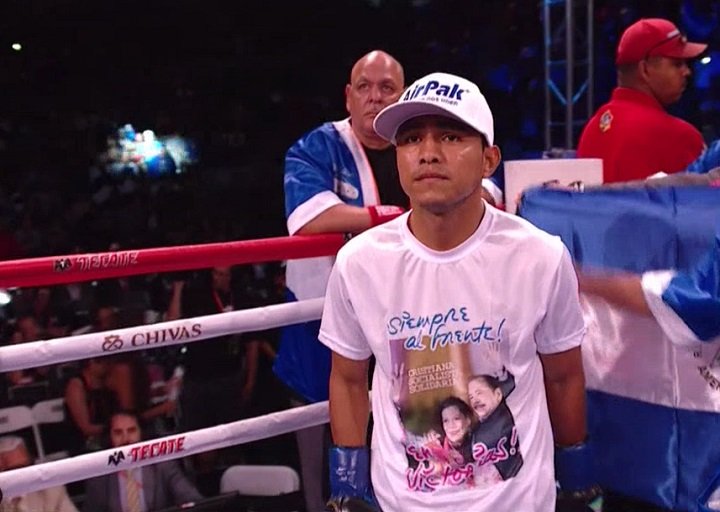 Gonzalez was supposed to fight Guevara earlier this year on the Gennady Golovkin vs. Vanes Martirosyan card on HBO Championship Boxing at the StubHub Center. The Gonzalez-Guevara fight failed to take place due to Guevara failing to get a visa to take the fight.

The Chocolatito vs. Guevara fight will be the last official card for HBO after 45 years of broadcasting boxing. It’s too bad that Gonzalez, 31, won’t be facing a better opponent than Guevara, who was beaten last year by Ken Shiro in October 2017 in a 12 round majority decision.

The former pound-for-pound king Gonzalez is trying to bring his career back following his two defeats at the hands of Srisaket Sor Rungvisai in 2017. Gonzalez’s losses to Rungvisai has a lot of boxing fans believing that he’s a shot fighter. However, Rungvisai is a fighter that would have been a headache for Gonzalez no matter what point in his career. The biggest mistake Gonzalez made in both fights against the Thailand fighter was his failure to adapt. Chocolatito tried to beat the bigger, stronger Rungvisai at his own game by slugging with him and that resulted in him taking a beating in both fights. Gonzalez shouldn’t have bothered to fight Rungvisai a second time if he wasn’t going to try and make changes to his fighting style, given that he lacked the needed size and power to beat him.

Chocolatito looked good in his last fight in stopping former World Boxing Organization 105 lb champion Moises Fuentes in the 5th round on September 15 at the T-Mobile Arena in Las Vegas, Nevada. Gonzalez came out slugging, and he was able to beat the weaker Fuentes. The fight showed that Chocolatito still can look good when fighting guys his own size. If he could move back down to 105, 108 or 112, he would very likely be successful. However, Gonzalez is said to be stuck at 115 due to him having problems making the weight limit at 112. If Gonzalez could make 112, he likely would still be fighting in that weight class and doing well. There’s nobody at 112 that Chocolatito wouldn’t be favored to beat if he could drop back down to that weight class.

On the undercard of the Chocolatito-Guevara card, women’s welterweight champ Cecilia Braekhus (34-0, 9 KOs) will be facing an opponent still to be determined.

Campbell is targeting a fight against former WBA 135 lb champion Anthony Crolla (33-6-3, 13 KOs) in 2019. Crolla, 31, will be fighting this Saturday night against the hard hitting Daud Yordan (38-3, 26 KOs) on the undercard of the Oleksandr Usyk vs. Tony Bellew cruiserweight championship fight at the Manchester Arena in Manchester, England. There’s no telling whether Crolla will win that fight, since Yordan is one of the best fighters in the lightweight division. Crolla vs. Yordan is a WBA final eliminator to pick a mandatory for champion Vasyl Lomachenko.

“I do believe that it’s a really good fight for UK fans, a great clash of styles,” Campbell said to skysports.com. “We both want world titles though and maybe he wants to fight me once I’m a world champion.”

Campbell shouldn’t assume anything when it comes to Crolla’s fight this Saturday against Yordan. Although Campbell believes Crolla will beat Yordan, he’s still not quite whether he will. Crolla didn’t look that impressive in his last two fights against Edson Ramirez and Ricky Burns. Crolla-Burns was a contest that could gone either way.

News:
Ryan Garcia: 'I'm going to SHOCK the world in 2020 when I beat Linares, Campbell and Gervonta'

Crolla is ranked #4 with the World Boxing Association. He’s going after his old WBA title that he lost to Jorge Linares in September 2016. Crolla lost twice to Linares, who is currently rated #1 with the WBA. Campbell is in a better position to get a title shot than Crolla is. However, neither fighter is considered a safe bet to win the respective champions at WBC and WBA. Mikey Garcia holds the WBC title, and he would be a very tough fight for Campbell. That might not be a winnable fight for Campbell. The WBA belt is held by Vasyl Lomachenko, a fighter that beat Linares by a 10th round TKO last May. If Linares can’t beat Lomachenko, then it’s unlikely that Crolla will do any better. In looking at Campbell and Crolla’s world title hopes, they might be better off facing each other before they go after world titles. At least they would get a good payday in a fight big domestic clash if they fought each other.

Crolla can strengthen his position for a world title shot if he beats Yordan on Saturday. But again, beating Yordan won’t help Crolla defeat Lomachenko when/if he gets inside the ring with him. Campbell admits that he’s not seen a lot of Yordan’s previous fights, so he’s not sure if Crolla can get by him.

Campbell says he’d be willing to go to Manchester to fight Crolla in his hometown if it would help him get the fight. Campbell likes the idea of facing Crolla in the summer. Campbell thinks that Crolla might like the idea of fighting him in Hull.

“I’ve not seen too much of Yordan and whether he’ll be tough competition but I know he’s a come-forward fighter, I still expect Crolla to win though,” Campbell said to skysports.com.

Campbell has wanted a fight against Crolla since he turned pro. It’s a crying shame that Campbell didn’t get a fight against Crolla before he was beaten in back to back fights by Linares in 2016 and 2017. It would have been nice to see the two face each other with a world title on the line. The way things are now, it’s going to be awfully tough for Campbell and Crolla to win the WBA and WBC titles. Mikey Garcia might vacate his WBC title if he finds success at welterweight. He wants to challenge IBF 147 lb champion Errol Spence Jr. in 2019 and there’s no telling how well he’ll go against him. Crolla might be able to wait out Lomachenko until he vacates his WBA title and either moves up or down in weight. The way Lomachenko is fighting now, no one is going to beat him anytime soon. He’s looking too solid right now. That could change in the future as Lomachenko ages, but obviously that’s not going to help Crolla, who is older than him.