Quillin: Andy Ruiz Jr. should have a say in Joshua negotiations 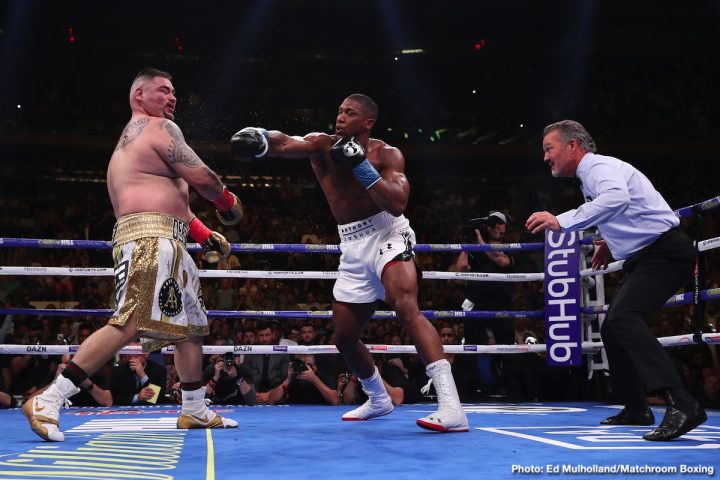 By Charles Brun: Peter Quillin say Andy Ruiz Jr. have a say in the negotiations with Anthony Joshua due to his previous win over the former IBF/WBA/WBA heavyweight champion last June. Quillin thinks it doesn’t look right that Joshua (22-1, 21 KOs) lost the fight, and now he’s the one dictating the terms for the rematch as the challenger.

Quillin’s view on the negotiations have been echoed by a lot of boxing fans, who see Joshua and his promoter Eddie Hearn using a power play in the negotiations by insisting that they choose when, where and what terms the fight will be held. Hearn has made it clear that the rematch will be taking place in the UK, not back in New York where the first fight took place.

Quillin: Ruiz Jr. should have some terms for rematch with Joshua

“Before Andy Ruiz Jr. fought Anthony Joshua, did he have a lot of say so in the fight?” asked Quillin to Fighthype. “So why when Andy wins, he still has got to go on Joshua’s terms now? He’s the champion. He should have some terms. He settled himself, and humbled himself down to take a fight that a lot of people thought he was going to lose, saying he was going to get knocked out in the third round. I had to tell people, ‘do not underestimate the guy,'” said Quillin about Ruiz Jr. going into his match with Joshua on June 1.

“Looks can be deceiving. I think the  [negotiating] terms [for the Joshua vs. Ruiz rematch] should be different. They [Team Ruiz Jr.] should be able to have some say. Anthony Joshua should humble himself down, who now can be considered like Frank Bruno. Remember how Bruno was this guy that everyone was giving [a lot of respect], because his body looked so good,” said Quillin.

It’s a little late now for Quillin to be talking about how Joshua should let Ruiz Jr. have some terms, because his promoter Eddie Hearn of Matchroom Boxing has already made it crystal clear that their side is picking when and where the rematch will take place. There’s obviously a lot of worry on Hearn’s part about Joshua, because he represents his biggest cash fighter, and he doesn’t want his career to be imploded.

It’s crazy for Joshua to be fighting Ruiz in an immediate, but that shows you that there’s not a lot of critical thinking going on from Matchroom’s side. Of course, if things are tilted badly in Joshua’s favor in terms of the referee stepping in and pulling Ruiz off of him repeatedly like we saw with the referee that worked the AJ vs. Joseph Parker fight, then Matchroom should be fine with the immediate rematch.

“He makes every other boxer look like this is how we should live to be able to get the sponsorship’s, and to create the looks behind it,” said Quillin about Joshua. “Andy Ruiz crushed all of that, and came out the winner. He’s considered the Mexican that’s fighting for Mexico, and he’s powerful. Look at how many people fat shamed him. They were fat shaming a guy that works hard, and went out there and became a world champion. That doesn’t even mean nothing that a guy that nobody gave a chance to don’t look good, but he’s important to a lot of people, to actually get off their butts and do something. Yes,” said Quillin when asked if he’s picking Ruiz Jr. to beat Joshua in the rematch.

Ruiz Jr. definitely crushed the Joshua mystique by knocking him down four times in the fight last June, and stopping him in the seventh. Joshua showed that he’s got very little punch resistance, and his chin isn’t what it should be for him to fight at the level that he’s at right now. However, we’d already seen Joshua’s vulnerabilities exposed by Wladimir Klitschko and Dillian Whyte in the past.

It wasn’t a surprise that Ruiz destroyed Joshua, because he’d always had major flaws in his game. Klitschko should have knocked him out if he’d shown some aggression after hurting him in the sixth round in their fight in 2017. Whyte would have done the same thing if he didn’t suffer a shoulder injury after hurting AJ in the second round in their fight in December 2015.

Joshua should make only minor adjustments to his game

“It’s only going to take small adjustments, because if he makes big adjustments, he’s going to become a whole another fighter, ” said Quillin about Joshua in talking about changes he needs for him to beat Ruiz. “He’s been undefeated with that style he’s got for so long, that he just needs to find out minor adjustments that he’s willing to make to be able to go into the fight and become a victor. But since this is a tossup, this guy [Ruiz Jr.] is special, he’s a good fighter; he’s a top quality heavyweight, that I would just put my money on Andy Ruiz.

I would say hitting the canvas, getting up, and knowing what to do next, and not to let that happen again; That’s what he did,” said Quillin about Ruiz. “He hit the canvas. There are a lot of guys, where as soon as they hit the canvas, they’re looking for a way out. He [Ruiz] didn’t. He came up fighting. That’s what we like to see. Reverse too. The same thing happened to Joshua, and look what happened. Didn’t he know what to do after he got back up? Did he? He tried, but no cigar. I’m not saying he can’t have a standout moment in the rematch,” said Quillin about Joshua.

Joshua will be looking to stay at range, and box Ruiz Jr. in the rematch. That’s one adjustment we’ll see from Joshua. It’s very likely that Joshua will try and mimic the Wladimir Klitschko style that he used in his fight against Joseph Parker in 2018 in Cardiff, Wales. However, one can argue the only reason that style worked is because the referee Giuseppe Quartarone prevented Parker from working his way inside to land shots.

Deontay Wilder vs. Tyson Fury rematch will be better than the first fight says Quillin

“I think he’s considered one of the best heavyweights out there,” said Quillin in talking about Tyson Fury. “Deontay Wilder has that one thing that everyone if lacking, and that’s power. He’s always going to be able to come out victorious. One punch can change a fight. People don’t give him credit. He’s been compared to [Mike] Tyson, Lennox [Lewis] and the Klitschkos. I think it’s a really good fight,” said Quillin about the Wilder vs. Fury rematch. “People say they thought Deontay Wilder lost. But more than anything, the rematch will seal the deal. Of course,” said Quillin when asked if the Wilder vs. Fury rematch will be better than the first fight. “Because they’re fighting with a different motivation.”

The Wilder vs. Fury rematch could be interesting, but it also could be the same. Fury isn’t going to stand and trade with Wilder, because it would end badly for him. When Fury tried to trade with Wilder in the 12th round last December, he was knocked out. The referee arguably saved Fury by giving a count while he was unconscious. It’s a good thing that Fury wasn’t seriously hurt, because that referee would have taken huge criticism for the way he handled the knockdown in the 12th.