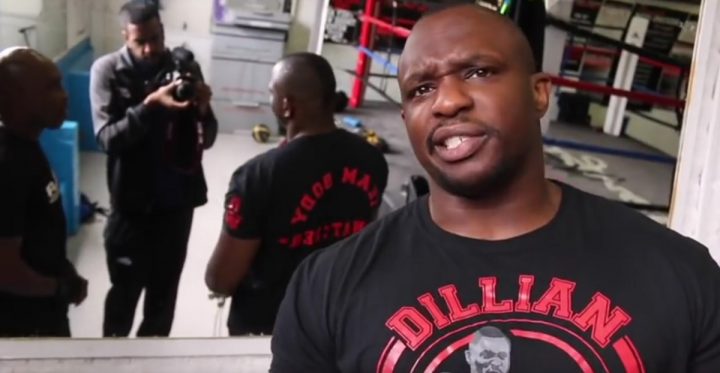 By Scott Gilfoid: Dillian Whyte is up in arms about his hoped for December 22 opponent Dereck Chisora asking for an even 50-50 split of the loot for their Sky Box Office PPV fight at the O2 Arena in London, England.

Whyte asking for a 75% split for the Chisora fight was always going to be trouble. That’s the kind of split you’d see Anthony Joshua enjoying against one of his mandatory challengers. The last time I checked, Dillian Whyte isn’t a world champion. Offering a pitiful 25% to Chisora for a fight was a complete waste of time. A good starting offer to Chisora would have been 40%, and they could have worked up from there.

Whyte maintains that Chisora originally asked for a split, and he was given it, but then things changed once he teamed up with David Haye as his manager. The negotiations have become more difficult for Whyte, with the amount that they want far and above what he was originally offering. Whyte says he agreed to a little over 30 percent for Chisora, but now he wants a better deal.

Whyte, 30, has put himself in this position where he’s negotiating from a position of weakness with Chisora. Whyte only has himself to blame. If he had negotiated a fight with Luis ‘King Kong’ Ortiz, the fighter that the boxing world wants him to fight, then he wouldn’t be so boxed in. Chisora and his manager Haye have out-foxed Whyte, as they know he’s desperate, because he chose not to work a deal with Ortiz, Jarrell ‘Big Baby’ Miller or Dominic Breazeale.

When Whyte and promoter Eddie Hearn failed to work with any of those three, it left only Chisora, who obviously can smell desperation from a mile away. Chisora and Haye know how badly Whyte needs him for the December 22 card, given that it’s a PPV card on Sky Box Office. Whyte and Hearn can’t just pick anyone as his opponent, and he’s already missed out on the chance to get the people’s favorite ‘King Kong’ Ortiz as his opponent. Ortiz likely waited around to see if Whyte was going to setup a fight with him, but when Dillian failed to schedule the match, his management moved on and set him up for a spot on the undercard of Deontay Wilder

“I was realistic with them, we offered 25 per cent, then 30 and then we moved again to a bit over that but now Haye is on board and he wants 50-50. I will just end up fighting someone else,” Whyte said to thesun.co.uk.

Offering Chisora only 25% for a fight that he would help bring in massive amount of fans would have been a great deal for Whyte. I’m not sure that you could say the same thing about Chisora. He would be bringing in a lot of boxing fans to purchase the Whyte-Chisora fight on Sky Box Office, but then he wouldn’t be able to enjoy the fruit of his labors. For a fight like this, a 50-50 deal would be a fairer deal. Without Chisora, Whyte likely won’t bring in flies on December 22 at the O2 Arena in London, and he won’t attract a lot of boxing fans to purchase the card on Sky Box Office PPV. From my understanding, the only backup plan Whyte has sitting on standby is Adam Kownacki, a fighter who isn’t exactly a household name in the UK or anywhere else for that matter. Kownacki isn’t well known, and he’s a dangerous opponent for a slapper like Whyte, because he’s young, powerful and ambitious. Kownacki has never been beaten, and he’s got the power in both hands to knockout Whyte. Joseph Parker had Whyte on the canvas in the 12th round in thier fight on July 28.

“To make the amount of money I am offering him for one fight, he would have to have 10 or 20 fights and he doesn’t have that many left in him,” Whyte said about Chisora.

You can say that for Whyte to make the kind of money he would get fighting Chisora, he would likely need to fight four of five times against the easy marks that he’s mostly been fighting recently.

In hindsight, Chisora and Hearn should have worked a deal with the 39-year-old Luis Ortiz, because that’s a fight that they likely could have been able to put together without too many problems. This is what happens when you have tunnel vision. It’s clear that the ONLY guy that Hearn and Whyte wanted all along was the 35-year-old Chisora (29-8, 21 KOs), who took advantage of their tunnel vision by asking for a 50-50 split. In the future, Hearn and Whyte need to get better about having some REAL backup options to use in case the desired opponent they have in mind prices himself out of the equation.

What makes it difficult for Hearn to do things like that is the limited talent that Whyte possesses. Whyte isn’t a good enough fighter to match him up against the likes of Ortiz, Jarrell Miller, Alexander Povetkin and Breazeale, and expect him to win those fights with a high degree of certainty. Whyte is too vulnerable as a fighter, so Hearn has less freedom to have the talented contenders waiting in the wings to face him if his Plan-A opponent asks for more than they’re willing to pay like we’re seeing with Chisora.

Unfortunately for Whyte, he doesn’t have much choice now. He’ boxed in by Chisora and Haye. Whyte either gives Chisora the 50% that he and his clever manager Haye are asking for or he picks out Kownacki, and winds up selling very few PPV buys on Sky Box Office and and not selling tickets at the O2 Arena. More so, Whyte might lose to Kownacki, so it’s a bad deal all around for Whyte. Kownacki is young and powerful, and he could finish what Joseph Parker started in knocking Whyte down in the 12th round last July. If Parker shook something loose in Whyte’s head in hurting him in the 12th, you can bet that Kownacki will capitalize on that by hurting him further. Above all, Whyte cannot afford to lose his next fight on December 22, because he’s already been penciled in as Joshua’s opponent for April 13 at Wembley Stadium in London, England.