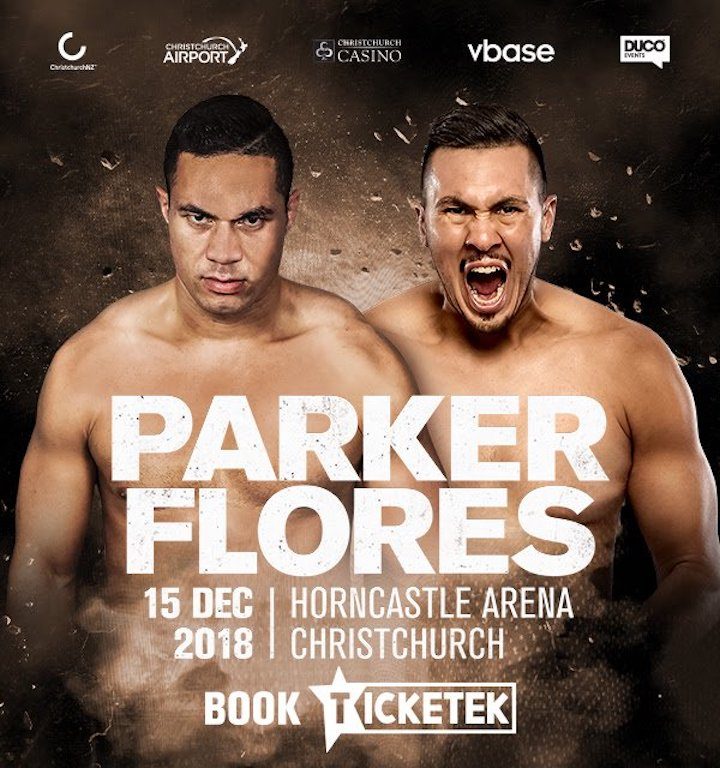 Joseph Parker’s quest to return to the top of the world heavyweight boxing rankings will begin at Christchurch’s Horncastle Arena on Saturday, December 15.

The former WBO world heavyweight champion will headline the night, which features many of New Zealand’s – and Canterbury’s – finest professional fighters.

Parker’s opponent for his first fight on New Zealand soil in 18 months is the formidable American, Alexander “The Great” Flores with an exceptional record of 17-1-1, his only loss was to Former IBF heavyweight champion Charles Martin, a fight he took on only two weeks’ notice. With an 80% knockout rate, the American is seizing the opportunity to end Parkers career and make his way to the big time.

In what promises to be a thrilling female contest, a feisty Megan McLennan takes on current New Zealand Muay Thai champion Michaela Jenkins in a five-round professional contest.

General Admission tickets start at $39* or watch the fight in style with a bronze, silver, gold, diamond or platinum- ringside package.

The event takes place on Saturday, November 24, 2018 as HBO World Championship boxing returns to the Hard Rock Hotel & Casino’s Etess Arena in Atlantic City. Bivol fights in his first main event in the United States, and Pascal fights for the first time ever in Atlantic City. This will be the second boxing event at the recently opened Hard Rock Atlantic City. The first event featured the WBO Light Heavyweight Championship battle between Sergey Kovalev and Eleider Alvarez in front of a sold out crowd.

Bivol, age 27, of St. Petersburg Russia, risks his perfect record of 14 wins with no losses and 11 knockouts against the time-tested Pascal, who turns 36 on October 28, has 33 wins, 20 by knockout, against five losses and a draw.

Bivol is coming off a dominating 12-round decision victory over crafty Isaac Chilemba of Malawi on August 4. Pascal is fresh from an eighth round TKO over former UFC champion Steve Bosse at Place Bell in Laval, Quebec on July 20.

The event is promoted by Main Events and World of Boxing in association with Jean Pascal Promotions. The bout will be televised live on HBO World Championship Boxing beginning at 10:00 p.m. ET/PT.

About Bivol-Pascal: Bivol vs. Pascal is a 12-round fight for Bivol’s WBA Light Heavyweight World Title on Saturday, November 24, 2018 at the Hard Rock Hotel & Casino in Atlantic City, NJ. The event is promoted by Main Events and World of Boxing in association with Jean Pascal Promotions, and will be televised live on HBO World Championship Boxing beginning at 10:00 p.m. ET/PT. Tickets range between $30 and $150 and go on sale Friday through Ticketmaster.com.