Regis Prograis vs. Terry Flanagan this Sat. on DAZN 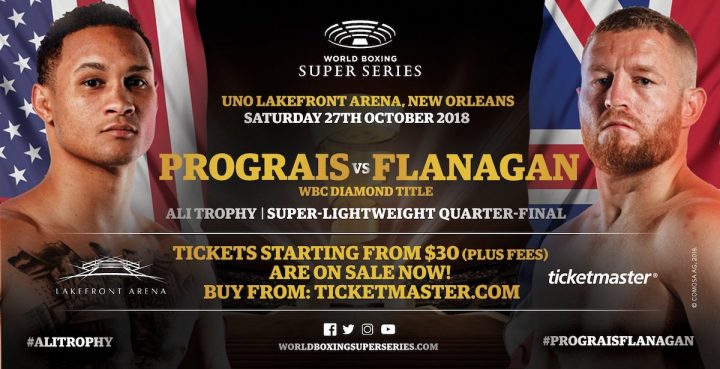 Prograis, 29, will be fighting in his hometown in front of his loyal boxing fans against former WBO 135 lb champion Flanagan, who is coming off of a 12 round split decision defeat at the hands of Maurice Hooker in a failed effort to win the vacant World Boxing Organization 140 lb title last June. To say that the 29-year-old Flanagan is coming into Saturday’s fight in bad shape career-wise is putting it lightly. Flanagan was dominated by Hooker after he gassed out in the second half of their fight last June and wound up losing a 12 round split decision in Manchester, England.

It was thought that when the 5’9″ Flanagan moved up from lightweight (135) to light welterweight (140), he would have more punching power and stamina due to him finally fighting at the right weight class for his huge size, as he often looked like a welterweight after he would rehydrate for his fights in the lightweight division. Some boxing fans viewed Flanagan as a ‘weight bully’ during the last six years of his career. In other words, a fighter that gains an advantage over his opponents by fighting in a weight class that is well below their natural size. That’s why it was a surprise that Flanagan gassed out so quickly against Hooker, and wound up struggling in the second half of the contest. The only explanation for that is Flanagan wasn’t used to carrying around the extra weight that he put on for the fight.

Flanagan is not a big puncher by any means, and he’s going to be facing a guy with major power at 140 in Prograis. Unless Flanagan can come up with some punching power to hold Prograis off this Saturday night, he figures to lose by knockout for the first time in his nine-year pro career. To date, Flanagan’s toughest foes as far as punching power goes was Derry Mathews and Maurice Hooker. Unfortunately, those guys have nowhere near the same kind of power that Prograis possesses, and they don’t attack the body the way he does. Prograis has close range power that makes him a threat when he gets in close.

Prograis has looked good lately, beating Juan Jose Velasco, Julius Indongo, Joel Diaz Jr, Wilfrido Buelvas and Luis Eduardo Florez. Prograis’ last opponent Velasco (20-1-1, 12 KOs) was able to take an awful lot of punishment for eight rounds before he finally crumbled. Prograis seemed to be focusing mostly on throwing body shots rather than head-hunting. It eventually paid off for Prograis in the 8th round when he was able to knockout Velasco, but the fight lasted a lot longer than it should have if Regis had head-hunted from the beginning.