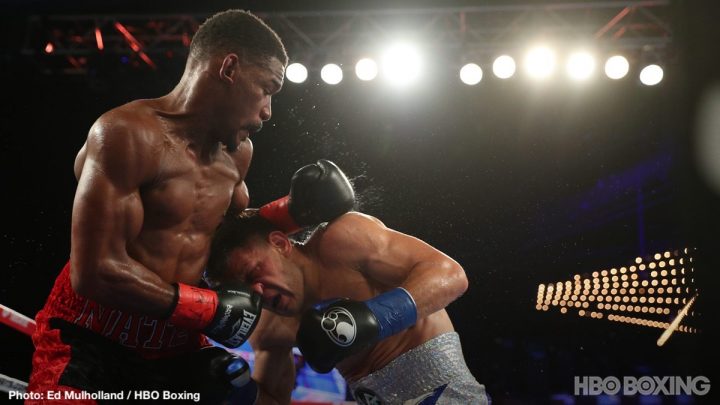 By Jeffrey Miller: Danny Jacobs beat Sergiy Derevyanchenko in a closely contested battle last Saturday night to put himself in the position for a unification fight against WBC middleweight champion Saul Canelo Alvarez in May of next year.

Jacobs won the IBF belt that had been stripped from Gennady Golovkin by the International Boxing Federation (IBF) last June when the Kazakhstan fighter failed to defend the belt against mandatory challenger Derevyanchenko. Golovkin sacrificed the IBF title in order to make a bigger match against Saul Canelo Alvarez on September 15. GGG wanted to keep the IBF title, but he got caught in a position where he would have needed to take the fight with Derevyanchenko on three weeks’ notice, and it was too tough of a fight for him to make that kind of defense without a full training camp to prepare for his style. Golovkin ended up defending against junior middleweight Vanes Martirosyan instead last May.

Jacobs (35-2, 29 KOs) took the belt that was vacated when Gennady Golovkin chose not to fight Derevyanchenko, his mandatory challenger, this spring while awaiting his rematch with Alvarez.

Boxing News 24 had Derevyanchenko winning a close decision by an eight rounds to four score.

Fighting in front of a large crowd of pro-Jacobs fans, Jacobs (35-2, 29 KOs) boxed his way to a 12 round split decision over sparring mate Derevyanchenko (12-1, 10 KOs) to win the IBF middleweight title at Madison Square Garden in New York.

Derevyanchenko fought Jacobs to a standstill in the first six rounds of the match, and then outworked him in the second half. Jacobs was putting too much emphasis on landing pot shots, and not making it a fight. Derevyanchenko looked like he wanted it more, and that helped him make the fight an even affair. Derevyancheko lacked Jacobs’ huge size, speed, power and mobility, but he made up for it by his aggression. Jacobs made the same mistake against Derevyanchenko that he had in his fights against Maciej Sulecki and Gennady Golovkin by failing to throw enough punches during key portions of the fight. Being defensive works for some fighters like Floyd Mayweather Jr., but for most guys, they need to be aggressive and throw a lot of punches if they want to win in a convincing manner.

Derevyanchenko, 5’9″, gave Jacobs a good warm-up to the type of firepower that he’s going to be dealing with when he faces Canelo Alvarez. Jacobs had to fight hard in every second of the fight for him to earn the 12 round split decision over Derevyanchenko. At the end of the fight, the the boxing fans were split in who they felt should have won the fight. Jacobs won the fight in the eyes of the only ones that counts in the view of the judges, but the fans saw it as a fight that could have gone either way.

Even a fight with Canelo Alvarez couldn’t be much tougher than the one Jacobs had Saturday night.

For a fighter with only 13 fights under his belt in the pro ranks, Derevyanchenko fought well in coming close to beating the more experienced 31-year-old Jacobs. Many boxing fans had never heard of Jacobs’ opponent Derevyanchenko before last night, but they were impressed with what they saw from the heavy-handed fighter from Ukraine, considering how close he came to defeating Jacobs.

Canelo, 28, beat Golovkin in their rematch on September 15 to win the WBA/WBC middleweight titles, and he’s now scheduled to face WBA World super middleweight champion Rocky Fielding in his next fight at 168 on December 15. Canelo and his promoters at Golden Boy Promotions haven’t said whether they’ll take a unification fight with Jacobs or not in his next fight after facing Fielding. Canelo will be fighting in May of 2019 against an opponent still to be determined. Canelo says he’s not sure if he’ll stay at 168 or move back down to 160 to defend his WBA and WBC middleweight titles.

Jacobs’ promoter Eddie Hearn of Matchroom Boxing USA has been telling the journalists that Canelo Alvarez is a fight that has a good chance of taking place next May. Hearn has been talking in such a way that it sounds like the Canelo vs. Jacobs fight is academic for May 2019. However, that’s the way that Hearn tends to talk, so it’s still unclear whether the Canelo vs. Jacobs fight will take place in the first half of 2019 or not.

Canelo’s options for his next fight at 160 are down to these fighters:

– Gennady Golovkin: Trilogy fight. This is easily the most lucrative fight that Canelo has in front of him. The two of them have fought twice on HBO PPV, and both fights brought in over 1 million PPV buys. The money fight for Caanelo is GGG, but it’s also the match with the most risk. Many boxing fans feel that Canelo was beaten twice by Golovkin.

– David Lemieux: This isn’t a big fight for Canelo, but it would give him a recognizable fighter with good punching power. Lemieux is promoted by the same promotional company, Golden Boy, that Canelo is.

– Rob Brant: WBA ‘regular’ middleweight champion. Brant recently defeated Ryota Murata by a one-sided 12 round unanimous decision earlier this month in Las Vegas to take his WBA title from him in a big upset.

If Canelo doesn’t face Jacobs at 160 in a unification fight, then it puts the new IBF champion in the position where he’ll need to face someone else. Jacobs’ promoter Hearn hasn’t shown any interest in matching him against dangerous opposition until he was literally forced to take the risky fight against Derevyanchenko to win the vacant IBF title. There was no way around that fight for Jacobs. If he didn’t fight Derevyanchenko, then he wouldn’t have had the opportunity to win the IBF 160 lb title and use it as a bargaining tool to get the fight against Canelo, Hearn believes that Jacobs has a great chance to get the Canelo, since both of them are with DAZN and that makes it an easy fight to make. The top middleweights that are signed with other promoters/managers that have deals with other networks won’t be agreeable to having their fighters compete against Jacobs on DAZN. Jacobs just finished his multi-fight contract with HBO last Saturday night with the Derevyanchenko fight. Hearn will now be taking Jacobs to DAZN to have his fights streamed on that platform. Canelo signed a monstrously big 5-year, 11-fight, $365 million deal with DAZN last week, which makes a fight between him and Hearn’s middleweights like Jacobs and Demetrius Andrade inevitable.

Jacobs was beaten by GGG last year in March 2017 in losing a close 12 round unanimous decision in New York. Jacobs wants to face Canelo, and then battle Golovkin in a rematch to avenge his loss from last year. Assuming that Jacobs gets both Canelo and Golovkin in rematches, he could make a great deal of money in 2019. At this point, it’s all speculation whether Jacobs will get either of those fights. Jacobs didn’t fight in an aggressive, crowd-pleasing manner last night against Derevyanchenko that would make him an appealing option for Canelo and Golovkin to face. Golovkin chased Jacobs around the ring last year for 12 rounds, and the fight resembled a game of cat and mouse. Golovkin would likely prefer to face someone that comes to fight rather than another mobile fighter that is just trying to go the distance against him like Jacobs.

“The fans want it,” Jacobs said about some fans wanting to see him fight against Canelo. “Now I have the strap, let’s do it. I’d rematch Triple G but he’s not a champion. I want the champs.”

The fans want to see Canelo fight Golovkin right now, not Jacobs. There are some boxing fans that want to see Canelo face Jacobs, but those fans are in the minority. The fans seem to be much more interested in seeing Canelo fight Golovkin or WBC interim middleweight champion Jermall Charlo (27-0, 21 KOs). Charlo, 28, is an unbeaten fighter, who has been making a lot of noise with his trash talking with the boxing media.