Dominic Breazeale to fight on December 22 on Charlos’ undercard 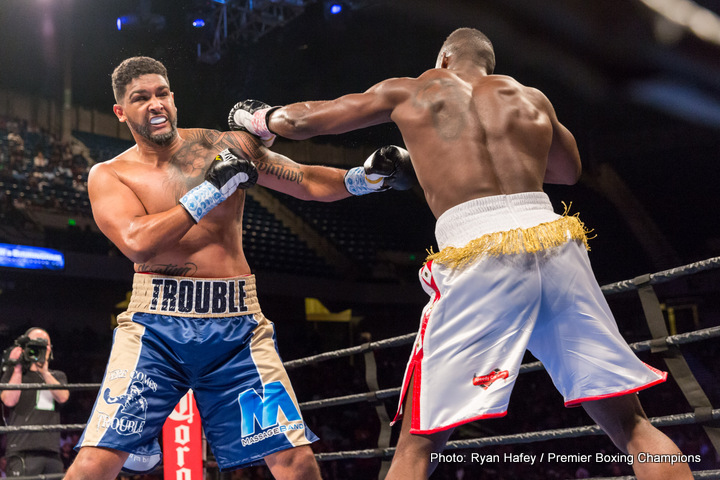 By Allan Fox: Former heavyweight world title challenger Dominic Breazeale (19-1, 17 KOs) will be fighting on December 22 against an opponent still to be determined on the undercard of the Charlo twin’s fights on Premier Boxing Champions on Fox and Fox Deportes at the Barclays Center in Brooklyn, New York, according to Michael Benson.

If Breazeale is matched against a PBC heavyweight, he would be looking at one of these fighters: Steve Cunningham, Joe Joyce, Travis Kauffman, Adam Kownacki, Charles Martin, Luis Ortiz, Oscar Rivas, Jordan Shimmell, Artur Szpilka, Antonio Tarver, Gerald Washington or Chris Arreola. Some of those guys would be tough outs for Breazeale, and I couldn’t see him agreeing to fight them.

Breazeale, 33, is the mandatory challenge to World Boxing Council heavyweight champion Deontay ‘Bronze Bomber’ Wilder, and he’s waiting for the WBC to order the fight. The WBC isn’t in a hurry to order Wilder to face the 6’7″ Breazeale, because they don’t want to get in the way of the Wilder vs. Anthony Joshua fight from happening.

Given that Breazeale is already Wilder’s WBC mandatory, and he’s likely to be the third fight from the main event on December 22, it’s likely that he’ll be facing a journeyman level opponent on that date rather than a top 10 contender. Matchroom Boxing USA promoter Eddie Hearn recently said last week that Breazeale is one of the backup options for Dillian Whyte to fight on December 22 if his fight with Dereck Chisora failed to take place. Now that Breazeale is pegged for the Charlo brother’s undercard on December 22, it look like the Whyte fight won’t be happening. Breazeale likely never stood a chance of getting the fight with Whyte. Breazeale is too much of a threat to Whyte, who is the leading option to face IBF/WBA/WBO champion Anthony Joshua on April 13 at Wembley Stadium in London.

Breazeale has won his last 2 fights against Izuagbe Ugonoh and Eric Molina since being stopped in the 7th round by International Boxing Federation heavyweight champion Anthony Joshua in June 2016. Breazeale did a lot of talking before the Joshua fight, but he didn’t do much fighting inside the ring on the night. Once Breazeale tasted Joshua’s power in the first two rounds, he was just taking punishment until the fight was halted in the 7th. Breazeale’s recent 8th round stoppage victory over Molina last November was the WBC title eliminator for a shot against Wilder. Breazeale has been asking for his title shot ever since, but the WBC has failed to order the fight.