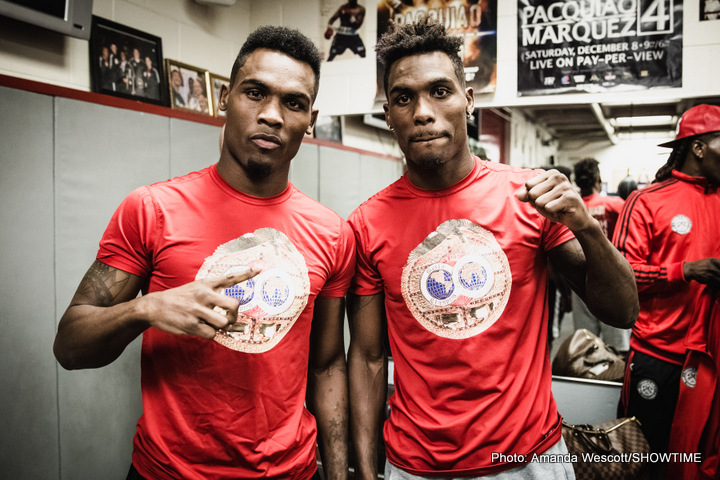 By Allan Fox: Jermall Charlo and his twin brother Jermell Charlo will be returning to the ring in two months from now on December 22 in fights against former two-time world title challenger Willie Monroe Jr. and Tony Harrison on Premier Boxing Champions on Fox and Fox Deports at the Barclays Center in Brooklyn, New York.

These are not good opponents for the Charlo twins, as they seem to be wasting their youth on fighting soft jobs rather than the guys that would further their careers. Neither of these fights will likely be competitive. Jermall has too much power, size and talent for gatekeeper Monroe Jr., and Jermell is going to be too explosive for the poor stamina-plagued Harrison.

Monroe Jr. is not the type of opponent that Jermall Charlo needs to further his career. Monroe has lost two in the last three years in losses to Billy Joe Saunders and Gennady Golovkin. Monroe Jr. is coming into the Charlo fight with a 2-fight winning streak against Javier Francisco Maciel and Carlos Galvan. Monroe Jr. is capable of beating the weaker opposition, but he fails when he steps it up against good fighters unfortunately.

The fans were hoping Jermell Charlo would face Jarrett Hurd, Erislandy Lara, Jaime Munguia or Kell Brook. Those are the talented fighters at 154. Harrison has been knocked out by journeyman Willie Nelson and Jarett Hurd. Harrison has never beaten a quality fighter.

It’s still unknown at this time which of the two Charlo brothers will be in the main event. The two will settle it with a coin flip this Thursday in their scheduled news conference to announce their fights against Monroe Jr. and Harrison. Both Charlo brothers are talented, and equally popular.

he Charlo brothers are not popular by any stretch of the imagination, and they’re quite equal in that respect. Whats held the Charlo brothers back from becoming stars is the way that they fight infrequently, and they tend to face opposition that is well below their talent level. For example, instead of Jermell Charlo facing the likes of Erislandy Lara and Jarrett Hurd at junior middleweight, he’s been facing Austin Trout, Erickson Lubin, Charles Hatley, John Jackson and Joachim Alcine. For his part, Jermall has been dining on Trout, Hugo Centeno Jr.,Jorge Sebastian Heiland, Julian ‘J-Rock’ Williams, Wilky Campfort,
Cornelius Bundrage and Michael Finney. None of those fighters are considered super talents, which is why Jermall has failed to take his career to the next level.

Jermall (27-0, 21 KOs) will be defending his interim World Boxing Council middleweight title against 31-year-old Monroe Jr. (23-3, 6 KOs). This will be Charlo’s first defense of his interim WBC 160 lb title that he won last April in stopping Hugo Centeno Jr. in the 2nd round. Jermall, 28, was hoping to get a title shot against newly crowned WBC middleweight champion Canelo following the Mexican star’s 12 round majority decision win over Gennady Golovkin on September 15, but Alvarez chose to move up to super middleweight to challenge WBA ‘regular’ 168 lb champion Rocky Fielding instead for his title.

Canelo has sounded ambivalent when asked whether he plans on returning to the middleweight division to defend his WBA and WBC titles that he won off of Golovkin. Since Jermall is Canelo’s WBC mandatory challenger for his 160 pound title, it’s important that he make it clear what his intentions are soon. The WBC ordered Jermall to defend his interim WBC middleweight title against GGG, but that move turned out to be a waste of time on the sanctioning bodies’ part, as Golovkin has shown no interest in taking that fight. As a result, Jermall is now defending his WBC interim middleweight strap against Monroe Jr.

The unbeaten Jermell (31-0,15 KOs) will be defending against #5 WBC Tony Harrison (27-2, 21 KOs). This would have been a good fight if Harrison wasn’t knocked by Jarrett Hurd in the 9th round in February of last year. Harrison, 27, has won his last three fights in beating 40-year-old Ishe Smith, George Sosa and Paul Valenzuela Jr.

The Charlo twins would have been better off fighting Monroe and Harrison on the undercard of the December 1st card headlined by Deontay Wilder vs. Tyson Fury. At least if the Charlos fought on that card, boxing fans would tune in to watch due to Wilder headlining. Putting one of the Charlo brothers as a main event isn’t a good idea, because they’ve not been facing good opposition and haven’t built up their names.

IBF/WBA Jarrett Hurd should be ready to face Jermell in 2019. Hurd had shoulder surgery to fix an injury he suffered before his last fight against Erislandy Lara. When Hurd does come back, he wants to take a tune-up and then go after a unification fight against Jermell That’ll be a good fight for the boxing fans to see how good Jermell is. The fans know Jermell can beat guys like Lubin, Trout, Jackson and Hatley. What they don’t know is if he has the talent to hang with Hurd, Lara or Munguia. Kell Brook would be a tough out for Jermell as well.

Fighting once or twice a year isn’t going to do much for the careers of the Charlo brothers. Matchroom Boxing USA promoter Eddie Hearn wants to sign both Charlos so that he can have them fight on DAZN on a frequent basis. It’s nice that the Charlos fight on Premier Boxing Champions on Fox, but they’re not busy enough and clearly not fighting the cream of the crop at 154 and 160.

Jermall hasn’t been vocal about putting pressure on the WBC to order his mandated title shot against WBC middleweight champion Saul Canelo Alvarez. Charlo has been the WBC mandatory for 15 months now, and the WBC still hasn’t ordered the champion to defend against him. How does Jermall expect to get a title shot against Canelo if he’s not making any noise about forcing the fight. It’s too easy for Canelo to ignore Jermall with him not complaining about being overlooked by the Mexican star. Instead of Canelo defending against Charlo, he’s freezing his WBC 160 lb title and moving up to super middleweight to challenge WBA World 168 lb champion Rocky Fielding on December 15. The WBC is letting Canelo freeze his 160 lb title with their organization without defending it.