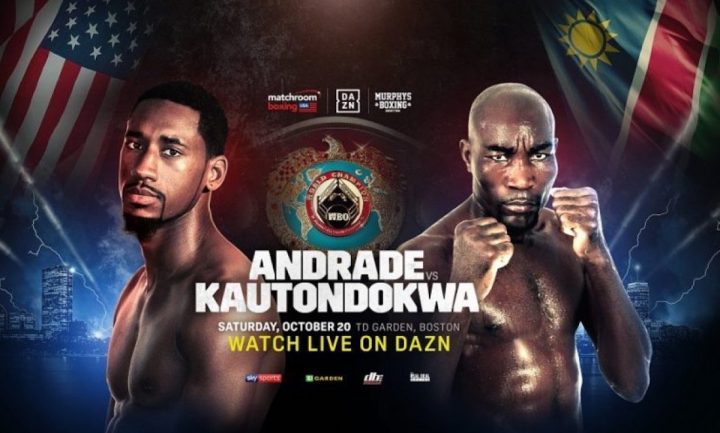 By Dan Ambrose: Demetrius Andrade (25-0, 16 KOs) wants to beat Walter Kautondokwa )17-0, 16 KOs) this Saturday night to capture the vacant WBO middleweight title and then use the title to get big names in the division to face him. Andrade’s end goal is to become the top dog at 160. He wants to see the 160 lb division to become the glamour division in which the top fighters are facing each other instead of avoiding each other, which you can argue has the norm.

It’s difficult to turn a division into a glamour division when there are two guys at the top, who are mainly interested in fighting each other or taking soft opposition in between their big money fights. That’s the situation with the middleweight division today.

Andrade and Kautondokwa will be fighting on Saturday, October 20 on DAZN on the Matchroom Boxing USA card at TD Garden in Boston, Mass.

“I think Middleweight can be the new glamour division in boxing,” Andrade said to nyfights.com. “We have big names at 160 lbs and if you look at 154 lbs, those guys are going to grow and they’ll have to come up – look at Jarrett Hurd, he’s a big dude.”

If Andrade beats Kautondokwa to win the vacant WBO 160 lb title on Saturday night on DAZN, he needs to start calling out the other middleweights in the division to show that he’s serious about wanting to fight the best. The winner of the October 27 fight between Daniel Jacobs and Sergiy Derevyanchenko would be perfect for Andrade to target for a unification fight. Jacobs-Derevyanchenko will be battling for Gennady Golovkin’s old IBF middleweight title that was stripped from him by the International Boxing Federation for failing to commit to a title defense on short notice against Derevyanchenko after Canelo Alvarez was popped for clenbuterol. Andrade needs to go after the Jacobs vs. Derevyanchenko winner if he wants to be seen as practicing what he preaches. It’s not use if Andrade beats the no name Kautondokwa this Saturday night, and then turns around and sits on his backside for the next 12 months until the WBO gets tired of waiting for him to finally defend the belt and strips him like they did before when he held the WBO 154 lb title.

The only old guy that is one of the top middleweights is 36-year-old Gennady Golovkin, who showed that he’s still the best fighter in the 160 pound weight class in his two fights with Saul Canelo Alvarez. Those two matches were viewed as Las Vegas robberies with the judges scoring it to keep a popular fighter Canelo from losing. However, Golovkin isn’t going to stick around for too much longer if he runs out of money fights. Going from making over $20 million fighting Canelo to earning only $1 million fighting no names as a contender will be a tough pill for GGG to swallow. He’s no longer a world champion after his controversial 12 round majority decision loss to Canelo Alvarez in their rematch on September 15 at the T-Mobile Arena in Las Vegas.

Andrade, 30, doesn’t think too much of the Charlo brothers, Jermall and Jermell, who he feels are only interested in fighting weaker opposition with their careers. Of course, a lot of boxing fans will say that Andrade is a hypocrite in criticizing the Charlos for fighting weak opposition when he’s failed to fight the best during his 10-year pro career, and he’s not been an active fighter. Andrade’s best opponents thus far in his career is Willie Nelson, Vanes Martirosyan, Brian Rose, Jack Culcay and Alantez Fox. Those are not great fighters. Besides not facing good opposition, Andrade has failed to stay busy with his career. Andrade should have moved up to middleweight six years ago when it was clear that the 154 lb weight class was a dead one, but he chose to remain at 154 to burn through his prime without fighting good fighters.

“If everyone involved with the elite does their jobs, we can make these big fights,” Andrade said. “The window is starting to close on those fights though, people get old, people move on, and people look to run around and fight lesser guys like the Charlos do.”

The Charlos have wins over Austin Trout, who is better than most of the guys that Andrade has fought during his career. Martirosyan is probably the best guy that Andrade has on his resume, and he likely would lose to Trout. It’s true that the Charlos haven’t fought any super talented fighters during their career, but Andrade hasn’t done anything either. Andrade wasted his time after winning the WBA and WBO 154 lb titles by not defending the belts. He defended the WBO title once against Brian Rose, and then he was stripped after that for failing to defend the belt for a year. After winning the WBA 154 lb title in March of 2017 i beating Culcay, Andrade ended up vacating the belt and moving up to middleweight without ever having defended it. Andrade has arguably been a huge disappointment for the fights that he’s failed to make, and for his decision not to defend his titles at 154.

Andrade has the perfect opponent for him to win an easy title on Saturday against Kautondokwa. The WBO might as well just give Andrade their WBO 160 lb title right now because he’s pretty much got the title in the bag just by showing up to face the inexperienced Kautondowkwa, who doesn’t have the amateur or the pro experience to defeat a fighter in the class of Andrade.

Matchroom Boxing USA DAZN promoter Eddie Hearn thinks Andrade is going to win the WBO title, and then use the belt to get fights against the likes of Canelo and Golovkin, but I’m not so sure. Canelo and GGG aren’t going to want to go after Andrade if it means that there’s no money in the fight. Perhaps if Andrade creates a huge amount of buzz with his win over Kautondokwa, they might consider fighting him, but right now, I’d say that’s a long shot. Andrade wasn’t popular when he was fighting at 154, and that’s probably not going to change now that he’s at 160, coming off of 12 month layoff and fighting a little known fighter named Kautondokwa.