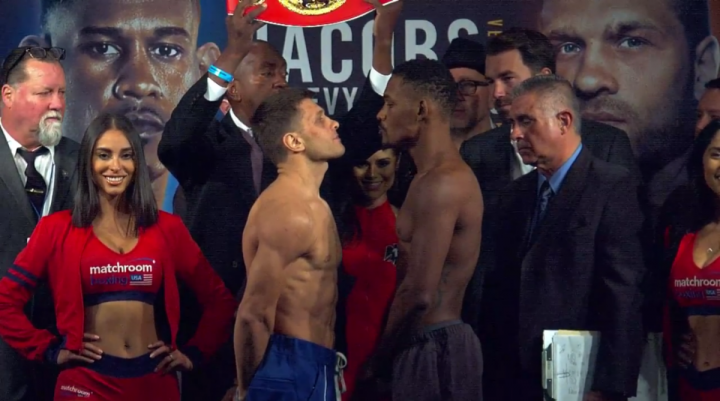 Jacobs started out as a huge favorite to beat Derevyanchenko with the odds-makers when the fight was first announced. However, the odds have narrowed recently, as the bettors seem to realize that Jacobs could lose due to his punch resistance problems and the way he’s failed to look impressive recently in his last two fights. When fighters look unimpressive in consecutive fights, it’s a red flag that they’re not a safe bet. Jacobs made weight, but he’s not going to be able to pack on the pounds like he normally does until tomorrow morning when the secondary weigh-in will be taking place. There’s no getting around that weigh-in for Jacobs like he did last year when he skipped the IBF’s weigh-in for his title shot against Gennady Golovkin.

Jacobs, 31, looked very thin and weight drained at the weigh-in compared to the short, stocky 5’9″ Derevyanchenko. The way that Jacobs looks right now, you can tell that he’s going to pack on a HUGE amount of water weight by the time he steps foot inside the ring on Saturday night at Madison Square Garden. However, Jacobs will need to wait until tomorrow morning for him to rehydrate all the way.

The IBF has a secondary weigh-in on the morning of the fight, and both fighters are only allowed to gain back 10 lbs for them to be able to compete for the IBF middleweight title on Saturday. Jacobs and Derevyanchenko will need to keep their weight no higher than 170 lbs tomorrow morning. That likely won’t be an issue for Derevyanchenko, 32, because he doesn’t pack on weight like Jacobs does. The IBF’s 10-lb rule might prove to be Jacobs’ undoing, being that he’s never had to deal with a secondary weigh-in other than in his fight with former IBF middleweight champion Gennady Golovkin last year. Jacobs skipped the IBF’s secondary weigh-in by choosing not to fight for the belt against GGG. This left Golovkin being the one that took part in the secondary weigh-in on the morning of the fight but not Jacobs.

With the IBF being an important lure to get WBC middleweight champion Saul Canelo Alvarez to fight him, Jacobs doesn’t dare skip the IBF’s secondary weigh-in on Saturday morning. Jacobs absolutely needs the IBF title to have a chance to fight Canelo in May 2019. Without the IBF title, Jacobs is just another contender for Saul to ignore. Jacobs might not get the fight against Canelo even if he beats Derevyanchenko. It depends on how Jacobs looks, and whether the boxing public gets excited if he defeats Derevyanchenko in an impressive fashion.

Derevyanchenko is getting Jacobs at the right time with him coming off a hard fight against Maciej Sulecki. Jacobs was hit a lot by the junior middleweight Sulecki. Jacobs’ promoter Eddie Hearn of Matchroom Boxing pooled from the 154 lb weight class to find him an opponent for his last fight instead of selecting a middleweight. It didn’t matter though. Jacobs struggled the entire fight, and needed a 12th round knockdown of Sulecki to cement the win in the eyes of the boxing fans. The judges saw the Jacobs-Sulecki dramatically different than the fans did. It was a very close fight from start to finish. Jacobs won, but not by the lopsided scores turned in by two of the judges, who scored it 116-111 and 117-110 for Jacobs. The fight took place in New York.

Unless Jacobs can land one of his bombs to get a fast knockout like he did against Peter Quillin three years ago in December 2015, this is going to be a grueling fight for him. Derevyanchenko has heavy hands. 2008 Olympian Derevyanchenko is not very fast, but he hits hard, and keeps the pressure on his opponents. Jacobs has been stopped in the past by Dmitry Pirog, and hurt in his fights against Gennady Golovkin and Ishe Smith.

Jacobs’ promoter Eddie Hearn has high hopes for him to beat Derevyanchenko, and then face Saul Canelo Alvarez in May 2019. Jacobs won’t be able to get that fight if he loses to Derevyanchenko on Saturday night.

Derevyanchenko is going to need to put a massive amount of pressure on Jacobs for him to win the fight, as Daniel has been talking about wanting to box from the outside to win by fighting smart. Jacobs has a big height and reach advantage, so he’ll likely play it safe on the outside to minimize the heavy shots that Derevyanchenko is able to hit him with. Jacobs showed in his fight with Golovkin that he can quite elusive when he wants to, and he’s almost impossible to hit when he’s being mobile. Although Jacobs’ movement in the first half of his fight with Golovkin was effective in helping him avoid taking punishment, he lost almost every round. Golovkin built up a big lead after six rounds. Jacobs was only able to win rounds when he started to stand and fight GGG. However, that was against a popular fighter in GGG. The judges might not be willing to give the less popular Derevyanchenko rounds like they did with Golovkin if he’s the one pushing the fight. Derevyanchenko is going to need to have fast feet for him to cut off the ring on Jacobs to force him to exchange, because he’s going to be trying to avoid exchanges as much as possible in the early rounds. Jacobs might even fight defensively for the entire fight, which could make it tough on the judges for them to score the rounds. Do they give it to the aggressor Derevyanchenko or to Jacobs for being defensive?

Jaime Munguia likely to sign with Top Rank, and fight on ESPN »