Jaime Munguia likely to sign with Top Rank, and fight on ESPN 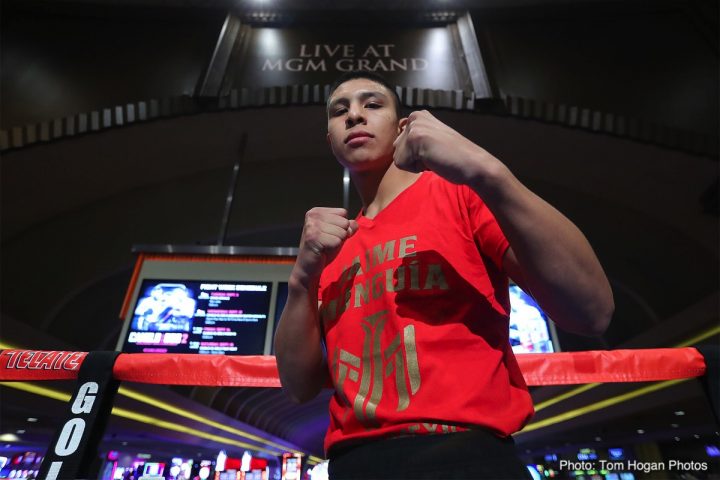 By Sean Jones: WBO junior middleweight champion Jaime Munguia (31-0, 26 KOs) s expected to sign with Top Rank and fight on ESPN once his current contract with Golden Boy Promotions expires after one more fights, according to Dan Rafael.

This is a big loss for Golden Boy Promotions for them to have Munguia on his way out of fighting for them. It was a co-promotional deal with Munguia’s main promoter Zanfer Promotions that Golden Boy had. Now it’ll be Top Rank that co-promotes the 22-year-old Munguia. It would have been nice for Golden Boy for them to keep Munguia so that they could slowly cultivate him to be an eventual replacement for Canelo, who might not thrive for too much longer once he faces Gennady Golovkin in a third fight. Munguia has the power and the talent to be a star wherever he goes.

“The next fight as it is his final fight under the short co-promotional deal he has with Golden Boy and Zanfer,” Arum said on his chat at ESPN.com on Friday about Munguia. “But once that is over, he is likely headed to ESPN under a deal with Zanfer and Top Rank. Those companies are very close.”

It’s too bad Munguia is on the verge of signing with Top Rank, because this could make it impossible for him to fight in unification matches against WBC junior middleweight champion Jermell Charlo and IBA/WBC champion Jarrett Hurd. But it might be the best though, because Munguia isn’t ready for either one of those guys, and it’s going to take a while for him to get enough experience under his belt to be able to compete with those guys. They’re much older than him.

Munguia is coming off of an impressive 3rd round knockout of highly ranked contender Brandon Cook last month on September 15 on the undercard of Canelo vs. Golovkin at the T-Mobile Arena in Las Vegas, Nevada. It was a much better performance by Munguia from his previous fight against former World Boxing Organization junior middleweight champion Liam Smith last July. Munguia struggled to defeat Smith by a 12 round unanimous decision by the scores 116-111, 119-108 and 117-110. Munguia’s defense looked shaky in the Smith fight, but his power was first rate. Smith was able to withstand Munguia’s power for the full 12 rounds. Munguia’s performance against Smith wasn’t up to the same level as the older and more experience Canelo Alvarez, who stopped the British fighter in the 9th round two years ago in September 2016. However, Canelo was 26-years-old at the time he fought Smith. Munguia was still 21-years-old at the time, and he had nowhere near the same experience as the Golden Boy star Canelo.