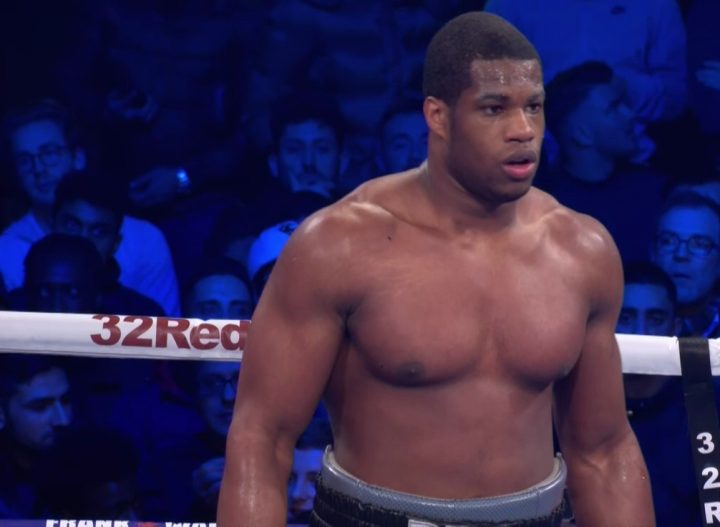 By Jim Dower: Undefeated heavyweight prospect Daniel Dubois (9-0, 8 KOs) defeated 39-year-old journeyman Kevin ‘Kingpin’ Johnson (32-11-1, 16 KOs) in beating him by a 10 round points decision on Saturday night at the Leiscaster Arena in Leicaster, UK. The score was 100-91.

The win for the 21-year-old Dubois was an impressive one against the veteran Johnson, but it paled in comparison to Anthony Joshua’s 2nd round TKO victory over Kevin three years ago in 2015. Johnson also was stopped by Peter Milas in the 8th round last March. Dubois didn’t measure up to what those two heavyweights did in stopping Johnson.

Dubois looked slow and robotic, as usual. That’s something he can’t avoid. He was was blessed with size and power, but not speed and agility. Dubois does better when his opponents stand in front of him and elect to slug it out. The way that Dubois looked, he’d have problems against guys like Nathan Gorman, Dereck Chisora and Dillian Whyte. It wouldn’t be fair to stick the 21-year-old Dubois in with any of them right now.

On the plus side, Dubois looked good in showing that he could box for the entire 10 round fight. His power looked good even deep into the contest. The only reason Dubois failed to get the knockout was he wasn’t attacking Johnson with enough combinations to put him away. Dubois was trying to hard to take Johnson out with single shots, and that was never going to work. Johnson can take single shots, and roll with the punches. When Johnson is hurt, he recovers quickly and is able to come back. Dubois’ lack of hand speed kept him from finishing off Johnson when he had him buzzed.

Johnson made sure that he boxed Dubois the entire fight. He wasn’t going to stand and trade with the 6’5″ 240 pound Dubois, because he wouldn’t have lasted long if he’d slugged with him.

Undefeated lightweight contender Jack Catterall (23-0, 12 KOs) stayed unbeaten in defeating Ohara Davies (18-2, 14 KOs) by a 12 round unanimous decision in a dull fight. The judges scored it 118-110, 11-113 and 115-113. Boxing News 24 scored it for Catterall by a 118-110 score. It was a good fight, but the lack of action made the fight difficult to watch and hard to score. Catterall should have dominated the fight, but his lack of action hurt the entertainment value.