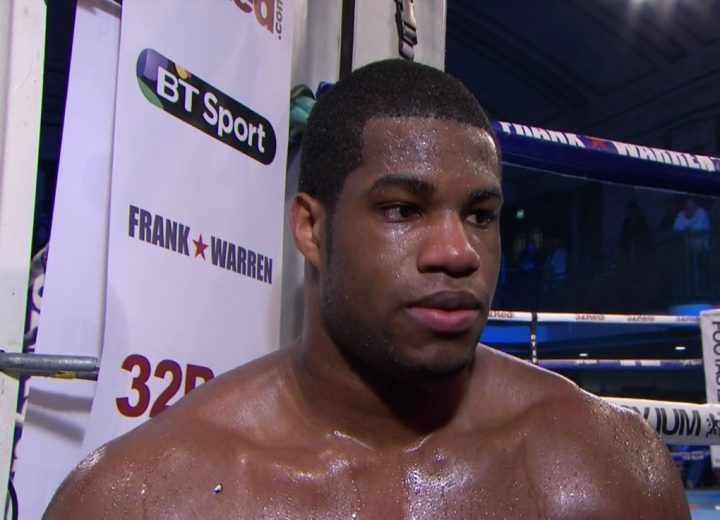 By Tim Royner: Heavyweight prospect Daniel Dubois (8-0, 8 KOs) will be taking a step up in class against 38-year-old former world title challenger Kevin ‘Kingpin’ Johnson (32-10-1, 16 KOs) in a scheduled 10 round fight on October 6 at the Leicester Arena in Leicester, UK.

This isn’t much of a step up for the 20-year-old Dubois, as Johnson is well past his prime after 15 years as a pro and two consecutive loses to Andy Ruiz Jr. and Petar Milas. Johnson’s last win was against Francesco Pianeta last year in October. Johnson stopped Pianeta in the 7th round. Former unified heavyweight world champion Tyson Fury is facing Pianeta this month on October 18 at Windsor Park.

This isn’t a fight that Dubois will learn much from, as Johnson is too far gone as a fighter for him to present much of a test for the 6’5”, 238 pound fighter. Dubois needs to take on better opposition than this. This is the type of opponent that Dubois should have got out of his system a long, long time ago. A this point Dubois should be fighting contenders like Bryant Jennings, Johann Duhaupas, Zhilei Zhang, Christian hammer, Otto Wallin or Alexander Ustinov.

Three years ago, Anthony Joshua stopped Johnson in the 2nd round in May 2015. After the fight, Johnson said he would be retiring from boxing. Johnson’s retirement lasted slightly less than two years. He came back against journeyman Terrell Jamal Woods in defeating him by a 6 round unanimous decision in March 2017. In Johnson’s five fights since then, he’s posted a 2-3 record in Kubrat Pulev, Petar Milas and Andy Ruiz Jr. Johnson’s only wins during that time period have been against Engin Solmaz and Francesco Pianeta.

Besides Johnson losing to Joshua, he also lost to Tyson Fury in 2012 by a 12 round unanimous decision, and he was beaten by Dereck Chisora by a 12 round decision in 2014. Johnson also has losses to Manuel Charr, Tor Hamer and former heavyweight champion Vitali Klitschko. Johnson has fought a lot of well-known heavyweights, but he always loses to them. The only decent names that Johnson has beaten during his careers is Pianeta, former world title challenger Alex Leapai, Devin Vargas, Alberto Sosnowski, Solomon Haumono, Bruce Seldon, Damian Wills, Robert Hawkins and Robert Higgins.

Dubois needs to try and stop Johnson within two rounds so that he can duplicate the efforts of Joshua in stopping him in the 2nd round in 2015. It would be a statement if Dubois can flatten Johnson in the 1st round. Johnson still has a little left in the tank, as he went the full 12 round distance against former heavyweight world title challenger Kubrat Pulev last year in April 2017. Pulev is a good fighter, and he couldn’t hurt Johnson.