Canelo Alvarez undecided about returning to 160 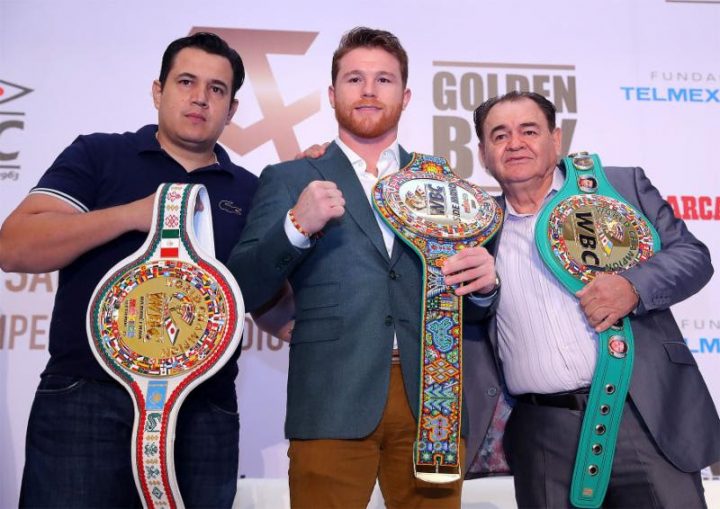 By Sean Jones: Saul Canelo Alvarez is moving up to super middleweight in pursuit of his third division world title on December 15 against WBA ‘regular’ 168 lb champion Rocky Fielding. The mystery question in the minds of the fans and boxing media is what happens after Alvarez (50-1-2, 34 KOs) beats Fielding (27-1, 15 KOs) to take his title.

When the Canelo-Fielding fight was made, Canelo and his promoters at Golden Boy Promotions failed to say whether this was a permanent move up to 168 for the Mexican star or if he would be moving back down to 160 to defend his WBC middleweight title against his mandatory challenger Jermall Charlo, who is waiting for him to move back down.

The World Boxing Council appeared to give Canelo a break by letting him take a voluntary defense in his first fight as the new WBC 160 lb champion. The WBC even went so far as to order Gennady Golovkin to face Charlo instead of Canelo. That move failed to elicit a positive response from Golovkin, so Canelo is probably going to need to take care of Charlo himself when/if he returns to the middleweight division in 2019. If the WBC doesn’t find someone else to face Canelo’s mandatory challenger Charlo, then he’s going to need to make the defense himself, which is what he should be doing as the WBC champion. Canelo’s time as the WBC middleweight champion could be fast expiring. When the WBC eventually orders Canelo to defend against Jermall, he’s expected to give up the belt. Charlo is a nightmare opponent for the 5’8″ Canelo, and it’s likely that the Golden Boy star will dodge that fight like he seemingly did when the WBC ordered him to face Golovkin in 2016. Canelo vacated the WBC belt and left it for Golovkin. Now it appears we could see Canelo pull the same move once the WBC orders him to face Charlo.

“What I’m looking for is to win this title (WBA super middleweight. I do not know whether to stay there or not, but to win this title and maybe go back to 160 pounds where I feel comfortable,” Canelo Alvarez said to ESPN Deportes.

Going back down to 160 would mean that Canelo would have to face the dangerous contenders and champions in the weight class for him to continue to gain the respect of the fans. Canelo can’t move back down to 160 and start fighting welterweights like Amir Khan once again or Julio Cesar Chavez Jr. In case that Canelo does return to 160, he needs to fight these fighters for him to be seen as not ducking the best:

These fighters are considered to be the best in the 154 or 160 lb weight classes, and the only ones that are worth fighting for Canelo to gain respect from the boxing fans. Canelo choosing not to go back down to 160, will be seen by people as him not wanting to have any part of these talented fighters. Since Canelo’s two fights with Golovkin ended in controversy, he needs to schedule a third fight with him as soon as possible for him to quiet the fans. It won’t be good for Canelo to wait long before giving Golovkin the trilogy fight that he and his promoter Tom Loeffler are asking for, because he’s about to turn 37-years-old. Assuming that Canelo will make GGG wait until September 2019 before fighting him, it’s going to take away the credit he would receive from boxing fans if he beats him at that time, because he’ll be 37 by that time, and he’ll have been waiting for a long time for that fight Golovkin wanted to fight Canelo five years ago when he was 32-years-old, but he had to wait until he was 35 before he finally fought him. Golokin wasn’t the same fighter he was at 35 as he was when he was 32, and tearing up the middleweight division.

It’s strange that Canelo doesn’t even know whether he’ll move back down to 160 or 168. Canelo, 28, should know by now what his intentions are with his future. It’s thought by a lot of boxing fans that the sole reason why Canelo moved up to 168 is to duck his fight the Charlo fight, as well as a trilogy fight against GGG. These events cast their shadows before when Canelo vacated his WBC 160 lb title when ordered to fight Golovkin in 2016 when he was looking like a beast. The WBC ordered Canelo to fight GGG, and he instead gave up his WBC belt and moved down to 154 and challenged the vulnerable World Boxing Organization junior middleweight champion Liam ‘Beefy’ Smith for his title in September 2016.

“I feel good, and keep doing the best fights for people and that characterizes me, always fighting with the best and I will continue doing it,” Canelo said.

You can’t say that Rocky Fielding is the best at 168. Canelo isn’t fighting the best by challenging the 31-year-old Fielding. That move looks to some fans like Canelo and Golden Boy Promotions purposefully targeted a weak champion for him to win his 3rd division world title without risk of losing.

The fighter/champions at super middleweight that are considered by many boxing fans to be the most talented are these guys:

Fielding is a good fighter, but he’s not viewed by fans to be among the elite in the 168 lb weight class. Therefore, Canelo’s choice of facing Fielding rather than the above fighters looks like a move on his part to win an easy title to pad his ring record. It’s too bad that Canelo isn’t daring to be great by facing one of the good champions like Benavidez, Ramirez, Callum Smith or Uzcatgui. A win over one of those fighters would bring Canelo huge credit from the boxing public. Even beating some of the non-world champions at 168 like Dirrell, Groves, Eubank Jr. or Hart would give Canelo a lot of respect from boxing fans.