Brandon Rios vs. Ramon Alvarez to be announced this week for Nov.17 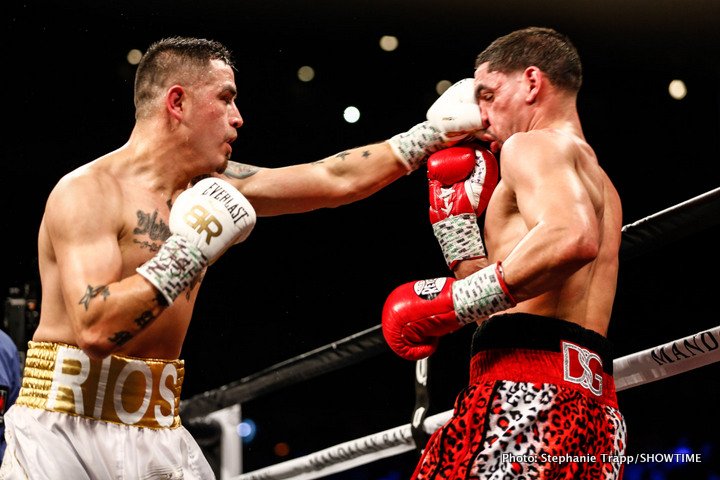 By Tim Royner: Eddie Hearn will be making an announcement this week for his November 17th DAZN card in Atlantic City, New Jersey, which will be headlined by former lightweight champion Brandon ‘Bam Bam’ Rios facing Ramon ‘Inocente’ Alvarez in a catch-weight at 151 lbs. Also on the card middleweight Gabriel Rosado vs. Luis Arias, former three division world champion Ricky Burns facing a still to be determined opponent and Anthony Sims Jr., according to Michael Benson.

Rios (34-4-1. 24 KOs) vs. Alvarez (27-6-3 16 KOs) will be an entertaining fight for boxing fans to see Brandon in a rare fight where he’s matched against someone that he has a considerable advantage in talent. Alvarez, 32, is one of the brothers of middleweight champion Saul Canelo Alvarez. Built in a similar manner as the 5’8” Canelo, ‘Inocente’ wasn’t blessed with his punching power, hand speed, reflexes or defensive skills. However, Alvarez does a lot of the same things Canelo does inside the ring with the way he throws his punches and avoids shots. He’s just a lot slower.

This is a fight that Rios absolutely must win. He can’t lose to a fighter as limited as Alvarez, because this would suggest that he’s totally washed up. Alvarez is a journeyman level fighter, someone that you can’t put in the ring with world class fighters at 154 or 160, because he would be shredded to pieces by those guys. Rios, 32, must show immediately on November 17 that Alvarez doesn’t belong inside the same ring with him. The best way for Rios to do that is to show Alvarez no respect like he did Mike Alvarado in their third fight in 2015 in stopping him in the 3rd round. Rios needs to go after Alvarez right off the starting line, and hit him with everything he’s got until then Mexican fighter folds. Alvarez was knocked out in the 2nd round by Omar Chavez last year in April 2017. Chavez, 28, is someone that Rios would do well against, as he’s a journeyman much like Alvarez. Chavez has lost two out of his last three fights against weak opposition. Alvarez losing to a fighter in Chavez’s class shows where he’s at in terms of talent.

Arias lost a year ago to Daniel Jacobs by a 12 round unanimous decision on HBO. Arias showed far too much respect for Jacobs’ punching power than he should have, and he ended up losing a one-sided decision for lack of effort. If Arias fights in the same cautious manner against Rosado, he’ll have no chance of winning the fight. Arias needs to be willing to put it on the line for him to have a chance against the hard-hitting 32-year-old Rosado. Arias fought with confidence in beating Arif Magomedov by a 5th round knockout last year in June 2017. That fight showed how good Arias can be when he’s being proactive and attacking his opponents. However, Arias’ fight against Jacobs showed that he lacks the punching power and the size to fight at middleweight. Arias should move down to 154 where his lack of size won’t be so much of a drawback for him, but he likely won’t do that. Arias is going to stick it out at 160, and struggle when he faces guys with size and power. Rosado will have the advantage in the power department in this fight. What we don’t know is how the ring rust will impact Rosado’s performance. He hasn’t fought in a year since his 6th round stoppage victory over Glen Tapia in October 2017, and he’s probably going to have a lot of ring rust when he gets inside the ring with the younger fighter Arias. Additionally, Rosado has lost 2 out of his last 3 fights since 2016 in defeats against Martin Murray and Willie Monroe Jr. Rosado thinks he was robbed in his loss to Murray in 2017, and a lot of boxing fans would agree to that, but the fact of the matter is he made it close enough to where Murray, the home fighter in Liverpool, got the edge on the scorecards. When you’re fighting in someone’s backyard like Murray, you’ve got to do more than you otherwise would do if the fight were to take place in a neutral venue or the U.S. Rosado was too passive at times against Murray, and his engine didn’t look good. Rosado will need to be able to fight a lot harder against Arias than what we saw in his losses to Murray and Monroe Jr. if he wants to win the fight.

Burns (42-7-1, 15 KOs) will be returning to the ring against an opponent still to be determined. Burns needs to be matched against world class opposition for him to be getting the most out of his career. It’s not worthwhile to see Burns being wasted on journeymen level Opposition at this time in his career. The 35-year-old Burns has lost two out of his last three fights in losses to Anthony Crolla and Julius Indongo. The loss for Burns against Indongo last year in April of 2017 was a clear victory for the Scottish fighter. But Burns’ 12 round unanimous decision loss to Crolla last October in Manchester, England was a controversial one in which Anthony appeared to be given a hometown decision. Burns bounced back from that loss in beating
journeyman Ivan Njegac by a 4th round stoppage last June in Newcastle. Burns has been all over the place in the last four years in fighting at 135 and 140, and fluctuating back and forth between the two weight classes without making up his mind which of them he wants to fight at. What’s clear is Burns’ lack of punching power makes him a poor fit for the 140 lb weight class. The sooner he realizes that the better it’ll be for him, because he’s not going to be able to do much fighting in the light welterweight division other than beating domestic level opposition.

American light heavyweight prospect Anthony Sims Jr. (16-0, 15 KOs) will be fighting an opponent still to be determined. The 23-year-old Sims is being slowly built up against increasingly better opposition. He’s not ready to take on the top dogs at 175 yet, so he’s not expected to be fighting anyone talented on the November 17 card on DAZN.