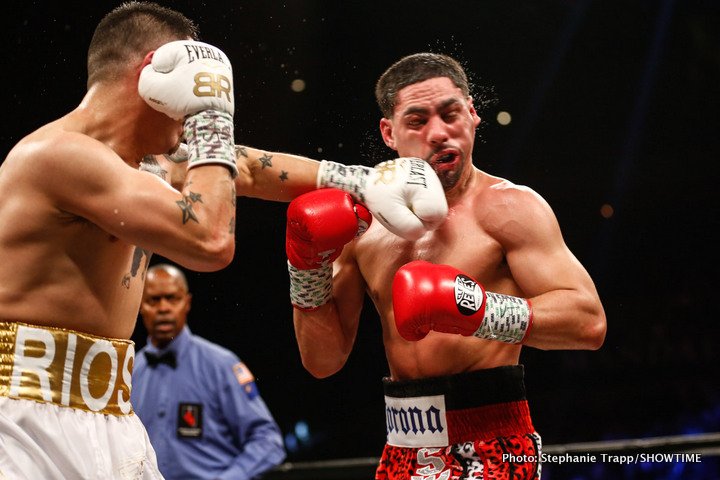 By Mike Smith: Gabriel Rosado (24-11, 14 KOs) will be facing former middleweight world title challenger Luis Arias (18-1, 9 KOs), and Brandon Rios (34-4-1, 25 KOs) will be fighting an opponent still to be determined in the headliner on November 17 on a Matchroom USA card on DAZN in Atlantic City, New Jersey, according to Nosparring.

Rios, 32, was said to be fighting Ramon ‘Inocente’ Alvarez (27-6-3, 16 KOs) at a 151 pound catchweight. It’s still unclear whether that fight will take place. Rios is perhaps too advanced for Alvarez, who is one of Saul Canelo Alvarez’s brothers. Rios hasn’t fought in the last eight months since losing to Danny Garcia by a 9th round knockout in February. Rios gave it a good try against Garcia, but he was caught with a hard right hand in the 9th and knocked out. The shot put Rios down flat on his back and he was unable to get back to his feet. Rios is going to pure trouble for almost anyone that he faces, especially against someone like Ramon Alvarez.

Former 160 lb world title challenger Rosado hasn’t fought in 12 months since stopping Glen Tapia in the 6th round in October 2017. Rosado looked good against Tapia in dominating him for six rounds. Before that fight, Rosado had lost his two previous bouts against Martin Murray and Willie Monroe Jr. The loss for Rosado to Murray was one in which he deserved a victory, but the judges gave it to the home fighter by a 12 round majority decision. The fight took place in Murray’s hometown of Liverpool, England. Rosado was livid after the announcer revealed the scores. Rosado failed to realize that he was going to be putting himself in the position where he would be robbed in fighting in Murray’s hometown instead of at a neutral venue where he might have a better chance of getting a decision. Rosado’s 12 round decision loss to Monroe Jr. in 2016 wasn’t a controversial fight, as he was outworked and beaten soundly. That loss probably cost Rosado a fight against Saul Canelo Alvarez, because there was talk that a fight between the two were possible if Gabriel had won the fight.

Arias had looked really good before facing Jacobs last November. Arias lacked the size and punching power to compete with Jacobs. It was a matter of Jacobs being too big for Arias. Before that fight, Arias had looked sensational in defeating Arif Magomedov, Scott Sigmon and Darryl Cunningham. It was too big of a step up for Arias to face a guy in Jacobs’ class at this early point in his career.

Rosado vs. Arias is a 50-50 fight. Arias can look very good against certain guys, but he struggled with the punching power of Jacobs. Rosado is one of those types of fighters in which you never know what kind of performance you’re going to get from him. Sometimes he can look great, but then he turns around and has an off performance. We saw that in Rosado’s losses to Monroe Jr., Derek Ennis, Alfredo Angulo, Chris Gray and Fernando Guerrero. Rosado shined against Joshua Clottey, Sechew Powell, Jesus Soto Karass and Ayi Bruce. There’s no question that Rosado has a huge advantage in experience against Arias. Rosado has fought so many talented fighters during his long 12-year pro career. In contrast, the only name on Arias’ six-year resume is Jacobs, who easily beat him. Arias was like a deer caught in the headlights against Jacobs. Arias was timid the entire fight, and looked like he wanted no part of Jacobs.