Arum says Terence Crawford will move to PPV next year 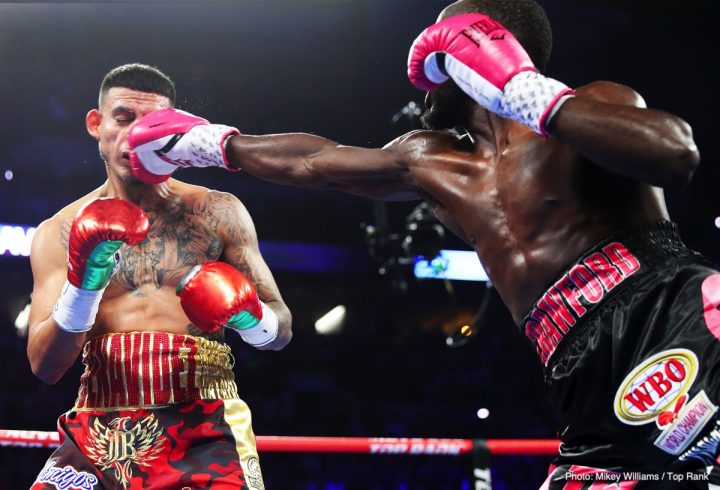 By Jeff Aranow: WBO welterweight champion Terence Crawford (34-0, 25 KOs) will be moving to pay-per-view in 2019, according to his promoter Bob Arum of Top Rank, who was pleased with his performance last Saturday night in halting Jose Benavidez Jr. (27-1, 18 KOs) in the 12th round on ESPN at the CHI Health Center in Omaha, Nebraska.

If Arum is serious about moving Crawford to PPV next year, then the boxing fans have seen him for free for the last time on ESPN. Unfortunately, moving Crawford to PPV will limit the amount of fans that see him fight, and that could further stunt his popularity. Crawford is still an unknown with a lot of casual boxing fans despite having been a pro for 10 years. Arum placing Crawford’s fights on PPV beginning in 2019 is going to isolate him at a time when he’s still slowly building his fan base outside of his home state of Nebraska.

Crawford hurt Benavidez with an uppercut that dropped him. Moments later, Crawford finished off Benavidez with some big punches to end it.. Arum’s idea of putting the 31-year-old Crawford will obviously require for him to be matched against opposition that the boxing world will be willing to pay to see. Arum can’t continue to match Crawford against fighters like Benavidez, Julius Indongo, John Molina Jr., Felix Diaz, Viktor Postol, Hank Lundy, Jeff Horn and Dierry Jean and expect the boxing fans to be willing to pay to see him face those types of opposition.

Arum is going to need to match the unbeaten Crawford against these types of fighters for the boxing public to show interest in paying their hard-earned dollars to see him fight:

“We know he’s a brilliant fighter, but to be so crowd-pleasing makes him special,” Arum said to ESPN.com about his intention of making Crawford a pay-per-view fighter in 2019. “Next year when he moves into the pay-per-view arena, people will remember that and want to see him fight because he’s so entertaining.”

Having Crawford branch over to the pay-per-view arena in 2019 is going to require that Arum reach out to other promoters to make the mouth-watering fights happen against their fighters. Arum can’t make Crawford a PPV guy by putting him in with his existing Top Rank stable guys. Arum’s stable isn’t deep enough at 140 and 147 for him make fights that the boxing fans will pay to see on ESPN PPV.

Arum has the following fighters as potential options for Crawford if he chooses to match him against only Top Rank fighters next year when he moves him over to the PPV arena:

It’s doubtful that Arum will match Crawford against Ramirez or Saucedo, because that wouldn’t be the best use of those fighters. Arum is trying to turn Saucedo and Ramirez into stars and it’s not going to workout well for them if he feeds them to Crawford.

What’s clear is Arum is going to need to match Crawford against fighters outside of his Top Rank stable if he wants to sell his fights on ESPN PPV. Matching him against the above named fighters isn’t going to workout well for him, because none of them are popular enough to sell a fight. Arum should try and lure the winner of the World Boxing Super Series light welterweight tournament into facing Crawford if possible. That could be either Regis Prograis or Josh Taylor. Although Arum could match his fighter WBC light welterweight champion Jose Ramirez against the WBSS 140 lb tournament winner, it would help Crawford if he could get the tournament winner to face him.

Crawford landed 186 of 579 punches for a 32 percent connect rate against Benavidez, according to CompuBox. For his part, the 27-year-old Benavidez landed 92 of 501 punches thrown for a connect percentage of 18. The stats showed the fight to be a wipe-out, which it was, but there were pockets in the fight where it was highly competitive and entertaining. After Benavidez, 26, tweaked his right leg in the 7th, the fight became a one-sided affair with Crawford landing virtually everything. That part of the fight wasn’t as fun to watch, as it was the mismatch that many boxing fans had expected it to be going into the contest.

13,323 boxing fans were in attendance to watch Crawford defeat Benavidez in his first defense of his WBO welterweight title that he won last June over Jeff Horn. There was bad blood between Crawford and Benavidez going into the fight from all the trash talking the two had done. Crawford had continually said that he was going to make Benavidez pay when he got him into the ring, and he kept his promise. However, it wasn’t as one-sided as Crawford made it out to be. Benavidez made it interesting with his size, toughness and his solid game plan in the first half of the fight. Benavidez made the fight tough for himself by not keeping his guard up to block the shots from Crawford. Benavidez probably would have still lost the fight even if he fought the perfect match, but he would have minimized the amount of punishment he took. You can blame Benavidez’s trainer for not staying on top of this by stressing the importance that Benavidez box smart and not just give Crawford free shots by fighting with his guard low, and backing up against the ropes to cover up.

Crawford’s purse for the fight was $3,625 million compared to $500,000 for Benavidez. That’s good money for Crawford to be making in a non-pay-per-view fight on ESPN. For Crawford to make the kinds of money that fighters like Saul Canelo Alvarez and Gennady Golovkin are making, he’s going to need to be matched against more popular fighters than Benavidez. The question is can Arum reach out to manager Al Haymon to put together fights between Crawford and the likes of Keith Thurman, Shawn Porter, Amir Khan, Danny Garcia and Errol Spence Jr? It’s not just Haymon that Arum will need to be on board for those fights to happen. The fighters will need to be open to fighting Crawford and they might not want to face a counter puncher, who often fights out of the southpaw stance. Crawford has not only those problems holding him back from making fights against the bigger ames in the welterweight division, but he’s also a mover and he’s not popular.

To sum things up, Crawford has these things potentially holding him back from getting the bigger names – Keith Thurman, Errol Spence Jr., Danny Garcia, Manny Pacquiao, Amir Khan and Shawn Porter from fighting him:

– Taunts his opponents during fights

– Not highly popular outside of Nebraska

Crawford could help himself if he changes the way he fights by moving less, not changing stances as much, and brawling more. Boxing fans don’t like to see movers, and they don’t want to pay to see them. Floyd Mayweather Jr. learned a long time ago that it doesn’t work for him to move a lot during his fights, which is why he would often perch himself against the ropes where he would pot shot his opponents for 12 rounds.

There are a lot of things that Crawford has going against him that could keep him from getting the fights that he wants and needs for him to become a PPV star. Crawford’s promoter Arum can certainly stick him on ESPN PPV in a hopeful manner. It might be one of those situations like in Fields of Dream where ‘if we build it, they will come’ in terms of the boxing fans flocking to purchase Crawford’s fights on PPV in 2019 once Arum moves him to that arena. I’m not sure it works that way, however. Stars like Floyd Mayweather Jr. and Manny Pacquiao were slowly moved over to PPV in their early 30s against other popular fighters. They weren’t just put on PPV because their promoter assumed they could make money fighting anybody. For Mayweather and Pacquiao to become PPV stars, they had to be matches against very popular fighters. It’s unclear whether Arum has anyone in mind for Crawford to branch out to PPV in 2019. If Arum matches Crawford against the likes of Benavidez in a rematch, Viktor Postol, Jessie Vargas, Egidijus Kavaliauskas or Jeff Horn, it’s probably not going to workout too well for him.

Crawford is one of the best pound-for-pound fighters in boxing, but unfortunately that doesn’t translate to PPV. Crawford being considered the best by hardcore boxing fans doesn’t mean that the casual fans like him and are willing to pay to see him fight. The hardcore fans love cruiserweight champion Oleksandr Usyk and WBA lightweight belt holder Vasyl Lomachenko, but the American casual fans aren’t about to want to pay to see them fight on PPV in high numbers to make it worthwhile for them to branch over to asking boxing fans to pay to see them fight. You can make the same argument about Crawford. Unfortunately for Crawford, there’s a big difference from being respected by hardcore fans and the casual fans.

“I want them all,” Crawford said after the fight with Benavidez.

Crawford says he wants all the fighters at 147, but he’s not been getting them In last four fights, Crawford has fought Benavidez, Jeff Horn, Julius Indongo and Felix Diaz. None of those fighters are on the map in terms of popularity with boxing fans. Things are going to have to change dramatically for Crawford to get “them all” at 147, and I’m not sure that they will. What we saw from Crawford last Saturday is a fighter who is resistant to changing his fighting style to be more entertaining, and willing to stand and trade with his opponents. Crawford’s style isn’t the type that is going to want to make the top welterweights from outside of the Top Rank stable to agree to fight him. Without the other fighters wanting to fight Crawford, he’s put in the position where he’s limited to the contenders that are rated high in the World Boxing Organizations top 15 rankings, and willing to fight him.