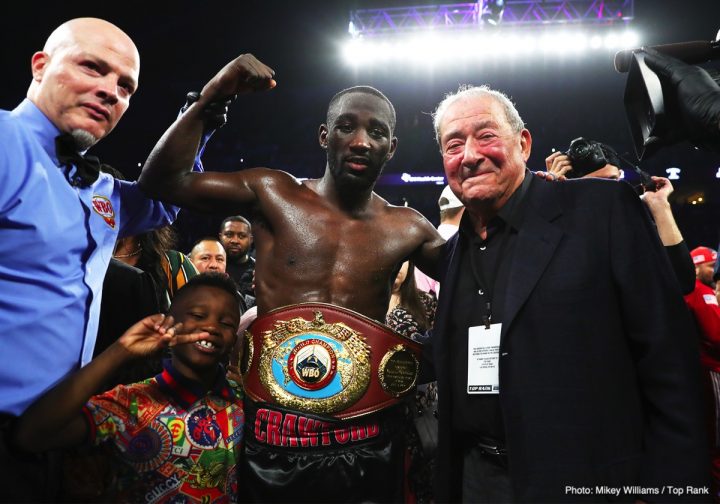 By Jim Dower: Top Rank promoter Bob Arum is ready to put together a unification fight between his fighter WBO welterweight champion and IBF champ Errol Spence following Terence’s 12th round knockout win over injured Jose Benavidez Jr. (27-1, 18 KOs) last Saturday night in Omaha, Nebraska. Benavidez looked like he came into the fight with a knee injury, which really takes away from Crawford’s victory.

Arum isn’t interested in matching Crawford, 31, against Premier Boxing Champions (PBC) fighters Danny Garcia and Shawn Porter, according to Mike Coppinger. Arum doesn’t see Garcia and Porter as elite fighters, and he doesn’t feel that they deserve a fight against Crawford. The fighter that Arum wants Crawford to fight is the 28-year-old Spence. The one problem that could make it difficult to negotiate the Spence-Crawford fight is the different networks. Crawford fights on ESPN, and Spence on Showtime/Fox. Arum likes the idea of having the Crawford vs. Spence fight shown on ESPN and Showtime. It would be a similar deal to how Floyd Mayweather and Manny Pacquiao fought each other in 2015. At the time, Mayweather was signed with Showtime and Pacquiao on HBO. The fight still got made, but the PPV audience was split. There was enough money to be made from the Mayweather-Pacquiao fight to bring in a lot of money to the HBO and Showtime networks.

“I’ll be happy to talk to PBC about putting on Spence,” Arum said to Wood Bmore TV about putting together a Spence-Crawford fight. “We can make a deal because it’s a pay-per-view event. It’s the same way we did with Mayweather and Pacquiao with both HBO and Showtime, and settle the distribution fee. All that would be worked out. You can always say because of this and because of that it can’t happen,” Arum said about the Crawford vs. Spence fight.

It’s unknown if Arum is serious about wanting to make the Crawford vs. Spence fight at this time. Arum did a lot of talking in the six years before the Mayweather-Pacquiao fight was made, and a lot of boxing fans saw him as the reason why the match never got made. Arum always talked up the Mayweather vs. Pacquiao fight, but then nothing ever came from his talk. Pacquiao arguably was helped by Arum constantly talking up the Mayweather fight during those six years. If Mayweather and Pacquiao hadn’t met each other at a basketball game to talk about putting the fight together in 2015, it might have never been made. If Arum is just talking up the Crawford vs. Spence fight just for the sake of getting more attention from the boxing world in Terence’s career without being serious about making the fight, it would be seen by boxing fans as a page taken out of the old Mayweather-Pacquiao playbook.

Arum only wants the Crawford-Spence fight. For the fight to happen, Top Rank will need to negotiate with PBC. It’ not a good thing that Arum doesn’t want to put together fights between Crawford and Danny Garcia and Shawn Porter. If Arum can’t negotiate the Spence fight, he’s going to be back to square one, matching Crawford against guys like Jeff Horn and Benavidez while the boxing public is bored. You’ve got to crawl before you walk when it comes to match-making. It would be nice if Top Rank and PBC are able to negotiate the Crawford vs. Spence fight, but the chances are high that it won’t get made because there may not enough money to keep both networks happy. While Mayweather vs. Pacquiao made huge money for the different networks, it might not be that way for Spence and Crawford, because they’re not big PPV stars. At best, a fight between them might bring in 1 million buys if that. If the PPV is split between the networks, it won’t be huge money for them.