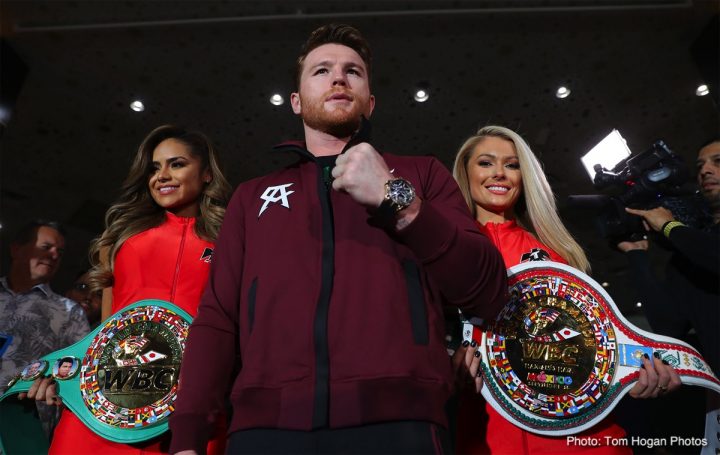 By Sean Jones: Trainer Abel Sanchez has openly given away the game plan that Gennady Golovkin will be using this Saturday night in saying that he’s going to be targeting Saul Canelo Alvarez’s midsection in their rematch at the T-Mobile Arena in Las Vegas, Nevada.

I don’t think Sanchez is kidding around in saying that Golovkin is going to target Canelo’s midsection to go for a liver shot. That’s precisely what I see Golovkin doing on Saturday night. If Golovkin and Sanchez have taken the time to do any amount of studying of Canelo’s past fights against quality opposition, they had to have seen how he was hurt by Austin Trout and Floyd Mayweather Jr. with body shots from both of them. Instead of reinventing the wheel by trying something different that won’t likely work, Golovkin must follow the blueprint created by Trout and Mayweather in how to hurt Canelo by throwing body shots.

”Don’t be surprised if Gennady end things using a punch that is a throwback to those days — a classic liver shot — to puncture the Canelo myth once and for all,” Sanchez said via skysports.com. “I normally don’t like to give away our game plan but I don’t mind sharing this part of it, Gennady has trained and is prepared to do the same thing to Canelo. We have freshened it up and even gave it a name, The Ginger Snap,” Sanchez said.

If Canelo doesn’t run from Golovkin in the rematch, there’s a good chance this fight is going to end early within six rounds. In looking at the replay of the first fight, Golovkin was having great success when he was throwing body shots against Canelo, but for some reason he chose to target his head. Sanchez likes to say that Golovkin fights with the ‘Mexican style’ but the fact of the matter is that GGG still predominantly uses his Eastern European style of fighting, which involves lots of head shots and very few body punches. If Golovkin had used the ‘Mexican style’ last September in the first fight with Alvarez, he probably would have stopped him early, because he had him exhausted in every round from the 3rd to the 12th. As tired as Canelo was in each round, he wouldn’t have been able to hold up under the body shots from Golovkin.

Last September, the Nevada judges scored the first Canelo-GGG fight a controversial 12 round draw at the T-Mobile Arena in Las Vegas. Golovkin likens the rematch with Alvarez going back to the scene of the crime in returning to the same venue at the T-Mobile Arena. That’s where Alvarez and his team at Golden Boy wanted the fight to be staged. It obviously, looks bad on their part to have the second fight take place at the same venue where they were seen by boxing fans in receiving a gift 12 round draw against Golovkin, but perhaps they believe it’ll give them good luck. Canelo is using the same gloves for the fight as he did in the previous one against Gennady.

Sanchez thinks Golovkin will stop Canelo with a liver shot in the same way that former middleweight champion Bernard Hopkins stopped Oscar De La Hoya in the 9th round in their fight 14 years ago on September 18, 2004. GGG had a lot of problems landing to the head of Canelo last September. The Mexican star spent almost the entire fight with his back against the ropes, landing backwards to avoid Golovkin’s shots and using tons of upper body movement while standing stationary. The upper body movement by Canelo made it almost impossible for Gennady (38-0-1, 34 KOs) to land his head shots. Instead of targeting Canelo’s body, which was there to be hit the entire night, Golovkin continued to throw head shots the entire fight.

It’s not lost on Golden Boy Promotions, Canelo and his trainers Eddy and Chepo Reynoso that Golovkin is going to be looking to go to his body on Saturday night. They know that Golovkin wont head hunt nearly as much this time, because it’s not easy to hit someone that moves their head as much as Canelo does. Canelo mocked Golovkin’s power after their fight last September, saying that he doesn’t hit as hard as people think he does. The reality is Golovkin had to take power off his shots in order to land with any degree of accuracy when he was targeting Canelo with head shots, because when he was loading up on his shots, he was coming up empty time and time again. After a certain point in the fight, Golovkin stopped punching with full power so that he could hit Canelo with his punches. Sanchez obviously noticed the problems that Golovkin had in landing to the head of Canelo, and he clearly understands that he’ll have the same kinds of issues trying to connect upstairs against the Golden Boy star in the rematch on Saturday. That’s why Sanchez has been preparing Golovkin to get Canelo’s body, because that is the one area where he cannot hope to get out of the way of his punches. Canelo doesn’t have the physique or leg speed to move out of the way of punches that are aimed at his midsection.

The official explanation by Sanchez as to why GGG didn’t throw body shots was that referee Kenny Bayless had warned Golovkin after he hit Canelo in the back a couple of times when targeting his midsection. Canelo was turning his back to Golovkin when he would spot him throwing to the midsection, and Bayless was unaware that this is an old trick that is taught to fighters to have their opponents warned for targeting the body. Sanchez says he was worried that Golovkin would be penalized. The smart thing for Golovkin would have been to alert Bayless to what Canelo was doing, and then continue to throw body shots rather than abandon throwing those types of shots. With the problems that Golovkin was having in trying to land head shots, he needed to target Canelo’d body, because that’s the one area where he’s never been good at avoiding getting hit. Floyd Mayweather Jr. and Austin Trout both hurt Canelo with body shots in their fights. Trout had Canelo hurt so badly that he spent the entire second half of their fight on the ropes in 2013. Canelo was given a controversial 12 round decision over Trout in a fight that appeared to be a draw.

Hopkins landed a perfect shot to De Hoya’s midsection in the 9h round that sent him crumpling to the canvas face first. De La Hoya then repeatedly punched the canvas in anger in pain, screaming, “No!” De La Hoya was in too much pain to get up off the canvas. It was clear even before the Hopkins fight that De La Hoya didn’t belong fighting at middleweight. In De La Hoya’s previous fight, he had beaten World Boxing Organization middleweight champion Felix Sturm by a controversial 12 round unanimous decision in Las Vegas, Nevada. Sturm, who came from Germany, battered De La Hoya for 12 rounds and seemingly had done more than enough to deserve the victory. Instead, De La Hoya was given a win that many boxing fans felt he didn’t deserve. After the fight, De La Hoya’s head was badly swollen and he looked like the clear loser of the bout. The fact that De La Hoya was stopped in his next fight by Hopkins wasn’t surprising because he arguably should have been beaten by Sturm and never gotten to that point.

However, the Hopkins-De La Hoya fight was already being talked about at the time De La Hoya fought Sturm, and there was a ton of money on the line for that fight between the two stars. It’s believed by some boxing fans that De La Hoya was given a win he didn’t deserve of Sturm in order to let him move forward to a much bigger Las Vegas fight against Hopkins.

It’s hard to compare the De La Hoya vs. Hopkins vs. Canelo vs. GGG fight, because those were two different matches. De La Hoya was coming at Hopkins the entire fight in 2004, trying to slug with him and getting the worst of it. At the time of the stoppage in the 9th, Hopkins was ahead on the scorecards 79-73, 78-74 for Bernard and 77-75. De La Hoya wasn’t playing defense and moving to his left all night long to avoid Hopkins the way that Canelo was trying to survive against GGG last September. De La Hoya was trying to actively win the fight, and it failed to work for him because he didn’t possess the size or the power to be standing in front of Hopkins.

“We are going to see if Canelo is coming to fight or coming to run, to survive, in hopes of receiving another gift from the judges,” Sanchez said. “Gennady is ready to take the wind out of Canelo’s sails with that punch to the liver.”

If Golovkin targets the body in the way that Sanchez says he will, then there’s a very good chance that he’s going to knock Canelo out at some point in the fight with a liver shot. It doesn’t neccesarily need to be a liver shot through. Golovkin could hurt Canelo with rib shots. Matthew Mackin was knocked out in the 3rd round by GGG in their fight in June 2013 after having his ribs broken by body shots from him. If Golovkin hits Canelo with a hard enough body shot on Saturday, he could take him out whether the fight hits him in the liver or not.