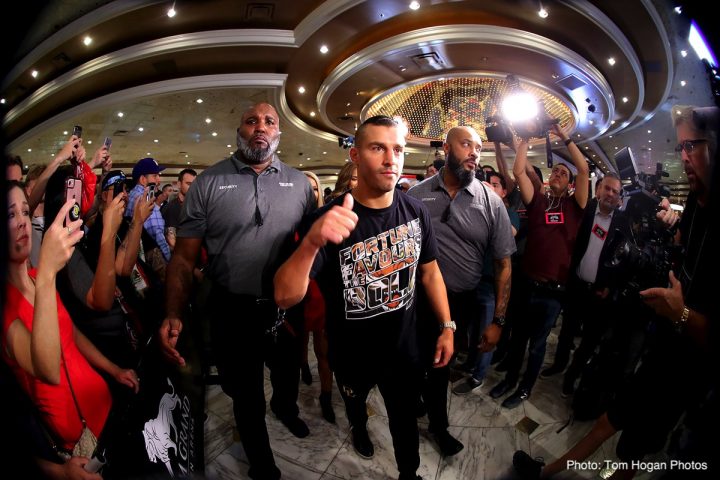 By Scott Gilfoid: avid Lemieux (39-4, 33 KOs) sees the highly ranked Gary ‘Spike’ O’Sullivan (28-2, 20 KOs) as little more than a trash talking big mouth with a social media problem, and he plans on shutting his trap this Saturday on September 15 on HBO PPV at the T-Mobile Arena in Las Vegas, Nevada.

This is an important fight for both fighters, as they’re rated highly and in position to get world title shots in the near future if they keep winning. In the case of O’Sullivan, a title shot isn’t likely the end goal. It’s a fight against Saul Canelo Alvarez. There’s a lot of money to be made by the 34-year-old O’Sullivan as the B-side opponent for Alvarez. But for a fight between O’Sullivan and Canelo to be a realistic option, the Irish fighter MUST beat Lemieux on Saturday night.

If O’Sullivan gets whipped by the Canadian fighter like he was in one-sided losses to Chris Eubank Jr. and Billy Joe Saunders, then it’s unlikely he’ll get a fight with Canelo. A fight between Canelo and O’Sullivan will still be possible, but only after Golden Boy puts the Irish fighter on another rebuild to bring back his shattered image. That will probably take at least a year or two depending on how desperate Golden Boy is to find a beatable opponent for Canelo to face.

A lot hinges on what happens with the 28-year-old Alvarez (49-1-2, 34 KOs) on Saturday night in his rematch with IBO/WBA/WBC middleweight champion Gennady ‘GGG’ Golovkin (38-0-1, 34 KOs) in the main event on the T-Mobile Arena in Las Vegas. If Canelo wins, then it improves O’Sullivan’s chances of fighting him straightaway as long as he wins against Lemieux. But if Canelo gets smashed by GGG or if he is given another controversial draw that the boxing public thinks he didn’t deserve, then it won’t help O’Sullivan get the fight against him.

”I promise you some fireworks. He has a big mouth,” Lemieux said about O’Sullivan. ”He likes to talk garbage on social media. He’s not the best kind of guy. I’m going to knock him out and make a lot of people happy. I’m at 100% right now. You’re going to see David Lemieux who is at his best this Saturday.”

I feel that Lemieux is superior to O’Sullivan in these areas:

Despite his recent dreadfully bad performance in losing to WBO middleweight champion Billy Joe Saunders by a one-sided 12 round unanimous decision last December, #5 WBO Lemieux, is still the favorite to beat #3 WBA, #3 WBO, #6 WBC, #14 IBF O’Sullivan on Saturday night. The reason why the odds-makers still have the 29-year-old Lemieux as the favorite to win the fight over O’Sullivan is obvious. Lemieux is younger, faster, more experienced, stronger and the better skilled fighter of the two. O’Sullivan trails Lemieux in every category under the sun. There’s not an area that you can name where O’Sullivan is better than Lemieux in my book. The only thing I can see where O’Sullivan is superior to Lemieux is with his social media presence. O’Sullivan is on social media a lot, trash talking and bantering back and forth. Lemieux is not as involved with his social media as O’Sullivan as far as I can see. Unfortunately for O’Sullivan, the fight won’t be won on Saturday night on social media. It’s going to go down inside the ring on the night.

If O’Sullivan is no better than what he showed in getting crushed to bits in seven rounds by a very, very raw Eubank Jr. in 2015, then he’s going to be ripped to shreds by the more highly talented Lemieux. In fact, that’s what I see happening in this encounter. O’Sullivan will come out swinging like Curtis Stevens did in his fight with Lemieux, and he’s going to get chopped down straightaway by a big left hook or right hand from him. There are certain types of fighters that don’t possess the style to beat Lemeiux, and O’Sullivan is one of them.

I hate to say it but O’Sullivan is made to order for a fighter like Lemieux. I mean, if you were to create the perfect opponent for a knockout artist like Lemieux to KO, it would be O’Sullivan. He’s the perfect mold for Lemieux to blast out in this fight. Power-wise, Lemieux reminds me of a young Julian Jackson (55-6, 49 KOs). Lemieux punches like Jackson, who was known as the biggest puncher in the 154 and 160 pound weight classes during his 18-year pro career from 1981 to 1998. Lemieux, 5’9”, doesn’t possess the same height and reach as the 5’11 ½” Jackson, who was referred to as ‘The Hawk,’ but the one-punch power is very similar. When Lemieux connects cleanly to the body and head of his opponents, he hurts them. Due to his come forward style of fighting; O’Sullivan is going to be there to be hit on Saturday night by Lemieux. That’s the only way that O’Sullivan knows how to fight.

”I’m going to teach him a lesson on Saturday night. I’m a very hard worker, I’ve been a hard worker my whole life,” O’Sullivan said. ”I fight like a Mexican. Watch out David, you’re getting knocked out.”

I wouldn’t say that O’Sullivan fights with the ‘Mexican’ style that he says he does. His stamina isn’t good enough, and he doesn’t hold up well when he’s met with adversity. When O’Sullivan starts getting hit back, he tends to crumble to pieces. He’s one of those fighters that only does well when he’s facing a guy that looks afraid of him and isn’t throwing anything of substance back at him. For that reason, I see him having a tough time when he gets inside the ring with Lemieux on Saturday night because he’s going to be getting hit back a lot in this fight for as long as the contest lasts. If O’Sullivan doesn’t change his way of fighting, he’s going to get obliterated by Lemieux.

Lemieux is going to have too much punching power and talent for O’Sullivan to deal with on Saturday night. I see the fight ending quickly with Lemieux knocking O’Sullivan clean out with a left hook by the 5th round. Lemieux looked terrible in his fight with Saunders last December, but he was facing a runner in that fight, and he looked overhydrated after struggling to make weight. Lemieux was much better in his fights with Curtis Stevens, Karim Achour and Marcos Reyes. The reason for that is because Lemieux had his weight right for those fights, and he wassn’t drained like he was in his fight with Saunders. In looking at the condition Lemieux is in right now, he appears to be in tip top condition. That’s bad news for O’Sullivan because it means he’s going to be eating hard leather all night long in this bout. I hate to say it but I can’t see O’Sullivan lasting long under the rain of fire from Lemieux on Saturday. I see this bout going terribly for O’Sullivan right from the get go. As soon as O’Sullivan comes out winging shots in round 1, he’s going to run into something and wind up getting wobbled by Lemieux. If O’Sullivan doesn’t have the presence of mind to hold on to get out of the round, the fight could end in the 1st round. It depends on how smart O’Sullivan is.