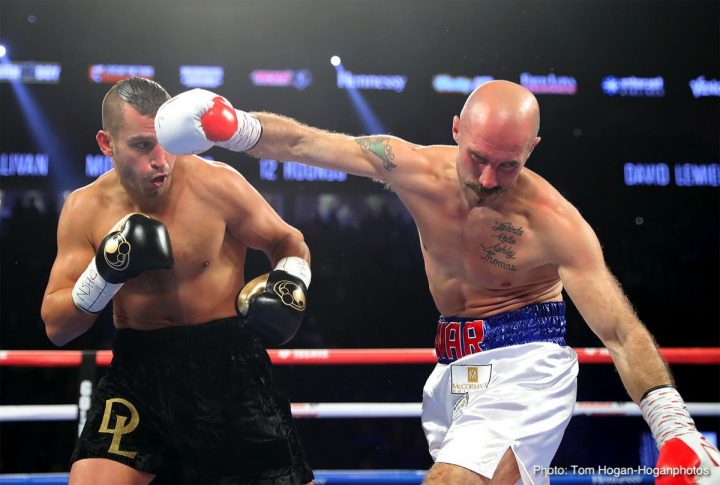 By Scott Gilfoid: Last Saturday night, David Lemieux had fun in knocking out the trash talking Gary ‘Spike’ O’Sullivan in the 1st round, and then immediately calling out Saul Canelo Alvarez following his 12 round unanimous decision win over WBA/WBC middleweight champion Gennady Golovkin.

What was interesting was Lemieux’s shot landed a fraction of a second after O’Sullivan’s own left hand. Lemieux was able to take the shot from O’Sullivan and still follow through with his own left hook, which knocked the Irish fighter down. Although O’Sullivan was continually trying to get to his feet, he wasn’t able to do it and the fight was stopped by the referee. O’Sullivan wasn’t expected to be knocked out so quickly. I mean, there were a lot of boxing fans that thought he had a good chance of winning the fight. Boy, were they wrong. O’Sullivan looked like he didn’t belong inside the ring with Lemieux, as he wasn’t throwing punches and he was just taking shots. O’Sullivan wasn’t even trying to cover up to keep from getting hit by the 29-year-old Lemieux. It wasn’t even a fair fight. O’Sullivan didn’t belong inside the ring with the power-punching Lemiueux.

“I showed you what I could do against Gary O’Sullivan,” Lemieux said. “I had to humble him and put him back in his place. Lemieux isn’t just one middleweight. Lemieux is going to be the middleweight.”

O’Sullivan, 34, was never even in the fight for a second last Saturday night. Lemieux came out firing big shots to the head and body of O’Sullivan, putting him on the defensive from the moment the fight started. O’Sullivan looked like he initially had ideas of making a fight of it, but once he tasted Lemieux’s power, he lost his interest in fighting back and he immediately went into a turtle defense, which is the wrong thing to do against a puncher like Lemieux. O’Sullivan would have been better off if he’d come out fast looking to knock Lemieux out. At least if he’d done that, he might have gotten lucky and landed something that might have hurt Lemieux.

”Big congratulations to Canelo, who fought an excellent fight tonight against Golovkin in the rematch,” Lemieux said. ”I thought it was fair play that he won the fight. It was a great fight. He’s [Canelo] also somebody I’m extremely interested in [fighting], so hopefully I’ll fight against him in the near future. A big fight like Caneo is what I’m extremely interested in. I think it would be a great opportunity for me to show the world what I’ve got, so definitely, yes,” Lemieux said when asked if he’d be interested in facing Canelo.

The big question is do Golden Boy Promotions want to try and sell a fight between the 28-year-old Canelo Alvarez and Lemieux on pay-per-view? Canelo’s contract with HBO is said to have expired. If HBO is going to extend Canelo’s contract, it’ll be interesting to see if they’re willing to put a fight between him and Lemieux on HBO PPV. It’s a tough sell given how horrible Lemieux looked in his previous losses to

WBO middleweight champion Billy Joe Saunders and Golovkin. I don’t know if Canelo-Lemieux is a sellable fight to have it put on HBO PPV. Canelo fought Liam Smith, Amir Khan, James Kirkland and Julio Cesar Chavez Jr. on HBO PPV, so perhaps he can sell a fight against Lemieux on PPV as well. It’s a horrible fight on paper, but then ago so was Canelo’s fights against Khan, Chavez Jr., Smith and Kirkland, and that didn’t keep him from fighting those guys, did it? If Golden Boy wants to put Canelo in with a sure thing easy win, then Lemieux is the perfect guy for him to fight. I still think it would be better if Lemieux earned the fight against Canelo by fighting someone good and showing that his win over O’Sullivan isn’t a fluke thing.

Lemieux is probably right about a fight between him and Canelo being a realistic one. It would be better for Lemieux to get another good win under his belt before he starts calling out Canelo and GGG though, as O’Sullivan is not a big enough win to erase the tarnish from Lemieux’s losses to Saunders and Golovkin in my estimation. I’d like to see Lemieux beat a solid middleweight like Maciej Sulecki, Demetrius Andrade, Daniel Jacobs or Sergey Derevyanchenko before he gets a shot against Canelo or GGG. Beating O’Sullivan was way too easy. O’Sullivan had never beaten anyone good in his career before facing Lemieux, and he didn’t look like he was ready for that kind of a step up in class from the fighters that he’d been facing.

“There’s not a middleweight like David Lemieux,” Lemieux said. “I felt great. I’m in superb shape. I give you guys great knockouts, great fights, and I hope you’re happy.”

This was the best shape that Lemieux has looked since his 3rd round knockout win over Curtis Stevens in March of last year. Lemieux had been too bulky and fat looking in his three previous fights before last night.

I don’t know where O’Sullivan goes from here. I guess he’s going to have to go back to the domestic level because he can’t hang with world class fighters obviously. This was the third time O’Sullivan has faced a top level fighter, and it was his third loss. It’s clear that O’Sullivan can’t hang with the top guys. That doesn’t mean it’s game over for O’Sullivan. He can still do well against domestic level middleweights back in his home country.

Lemieux has the kind of power to stop anyone in their tracks if he lands cleanly, and that includes Canelo and Gennady Golovkin. O’Sullivan had been mouthing off something fierce and Lemieux put him in his place in paying him back with his 1st round stoppage win.