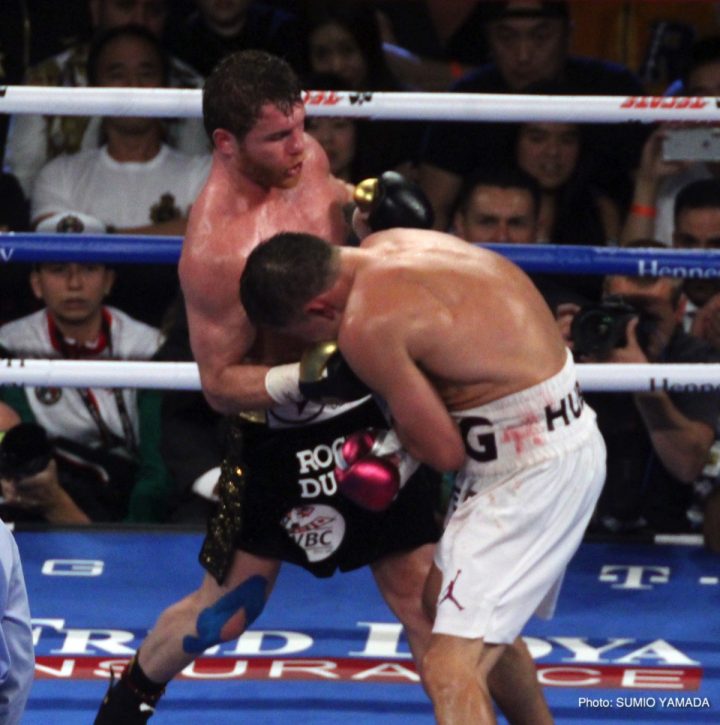 By Mike Smith: WBO junior middleweight champion Jaime Munguia (31-0, 25 KOs) says he had Gennady Golovkin beating Saul Canelo Alvarez last Saturday night in their grudge match on HBO PPV. When asked who won the fight between Canelo and GGG, Munguia said, “Golovkin.” It’s unclear whether Munguia truly meant this or if he was just saying what he thought the boxing media wanted to hear.

Munguia says he would like to fight Alvarez one of these days, and he feels he bring more action to the fight than GGG did.

Munguia looked sensational in beating Brandon Cook by a third round TKO in making his second defense of his WBO junior middleweight title on the Gennady ‘GGG’ Golovkin vs. Canelo Alvarez card last Saturday night at the T-Mobile Arena in Las Vegas, Nevada. Munguia, 21, showed a lot of punching power in knocking out Cook.

”Yeah, it’s going to have more action,” Munguia said to fighthype when asked if a fight between him and Canelo would have more action than his rematch with GGG. ”Hopefully, we can come back in November or December.”

Munguia wouldn’t try and box Canelo the way that Golovkin was doing. Munguia has more of a seek and destroy attitude about him than GGG. Munguia is smart enough to know that he would never beat a fighter like Canelo by boxing him for 12 rounds. GGG thought he could win against Canelo by standing on the outside and trying to out-box him for 12 rounds. It obviously didn’t work for him.

Golden Boy Promotions will likely one day match Munguia against Canelo, but not right now. They’re trying to turn Munguia into a star right now. Putting the 21-year-old Munguia would be a bad idea right now because he would likely be beaten and that would hurt his popularity with the U.S boxing public. It would also hurt Munguia’s self-confidence. If Golden Boy does it the same way they did in waiting until Golovkin had slipped a couple of notches before matching him against Canelo, it’s possible that they’ll wait for three or four years before they make the Canelo-Munguia fight.

By the time Canelo is in his early 30s, he’ll have lost some hand speed and will be worn down enough to where Munguia will be competitive with him. However, given that Golden Boy needs beatable opposition to put in with Canelo, they’ll likely make the Canelo vs. Munguia fight soon. It’s one way for them to increase Munguia’s popularity in a hurry, as long as he doesn’t get beaten too badly. In the best possible world, Munguia will give Canelo a tough time in losing the fight by a close 12 round decision or in a fight that is back and forth with both guys getting hurt. I doubt that’ll happen though, as Munguia is too inexperienced to be fighting a guy at Canelo’s level right now.

“I’d like to fight against anyone of those two, but first I’d like to fight in my division, which is super welterweight, 154 pounds,” Munguia said when asked if he’d be interested in fighting Canelo or Golovkin. ”Yes, I’d love to fight the other two champions [Jarrett Hurd and Jermell Charlo] and unify my titles. Right now, I’m fine at this weight. I’ll be here for another year and a half,” Munguia said.

In the first round, the 6’0” Munguia landed a powerful left to the midsection that got the attention of the 32-year-old Cook. The Canadian fighter said it was a low blow, but it was clearly above the belt. Munguia teed off on Cook for the rest of the round in landing some big shots. Cook took some major shots in the round. It’s a credit to Cook that he was able to take the shots because Munguia was landing some monstrous shots on him in the same way that he was doing in his fight with Sadam Ali last May. Munguia stopped Ali in the 4th round to win the World Boxing Organization junior middleweight title.

In round three, Munguia knocked Cook down with a 1-2 combination at the start of the round. After Cook got back to his feet, Munguia went after him, nailing him with tremendous shots until the referee Tony Weeks had to step in to halt the fight. The official time of the end of the fight was at 1:03 of round three. It was a good win for Munguia, but it was expected to be a quick stoppage because Cook was a carefully selected opponent who had recently been knocked out by Kanat Islam.

Munguia connected on 43 of 147 shots for a connect percentage of 29, according to CompuBox. Cook landed 13 of 66 for a 20 percent. The fight was a massacre, as it was clearly intended from the start. Munguia has a lot more problems defeating former WBO 154 pound champion Liam ‘Beefy’ Smith last July in beating him by a 12 round unanimous decision in his first defense of his WBO title. That ws a very hard fight or Munguia, which is likely the reason why Golden Boy picked out Cook to have Munguia defend his title against rather than waiting for a good opponent for him to fight. Golden Boy needs to be careful in who they match the young Munguia against because if he faces someone a little too good, he’ll get beaten. That’s just the way it is. Munguia I a good fighter, but he’s still too slow and vulnerable to be matched against the wolves in the division at this point.

Munguia’s next fight will be on HBO in December. It’s unclear who Golden Boy has in mind for him. His contract with the company will end at that point with the promoter. If this is the last fight with Golden Boy, then it won’t be surprising to see them match him against a good fighter like Canelo. With it being a co-promotional deal, Golden Boy will likely need to have Munguia’s promoter give the green light to whoever they decide to match him against in December. Canelo would be a great opponent for Munguia to fight, but it’s unlikely to happen. Munguia is just not ready for that level of an opponent.


« Gennady Golovkin: “I come back, guys, I come back