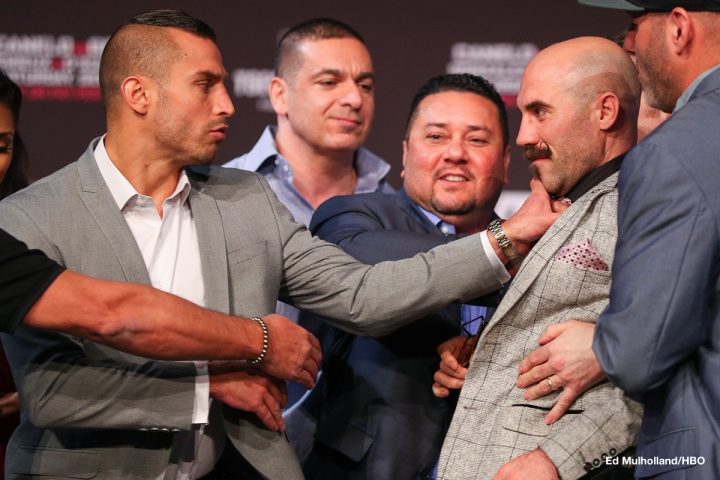 By Jim Dower: David Lemieux says he’s ready to go out and obliterate middleweight contender Gary ‘Spike’ O’Sullivan his Saturday night in their fight on HBO pay-per-view. Lemieux and O’Sullivan is a fight that has a lot of boxing interested in, as the winner of the fight has a good chance of facing Saul Canelo Alvarez in December.

Canelo’s promoters at Golden Boy Promotions promote both fighters, and it makes all the sense in the world for them to match the Lemieux (39-4, 33 KOs) vs. O’Sullivan (28-2, 20 KOs) against Canelo rather than putting the popular Mexican fighter in against someone that might be a little too big, too talented and too fast for him like Jermall Charlo or Daniel Jacobs.

“His style is aggressive. He’s going to come at me,” Lemieux said about O’Sullivan. “I’m stronger and more powerful than he is. I want to tear his head off. He’s a very disrespectful guy. He has no class. He’s the type of guy that comes out and talks all kinds of things on social media. I’m staying focused. We’ll see how long he lasts. I know when I start landing my shots, I’m going to be breaking some bones in here. I want to break all his bones. It’s going to be brutal,” Lemieux said. 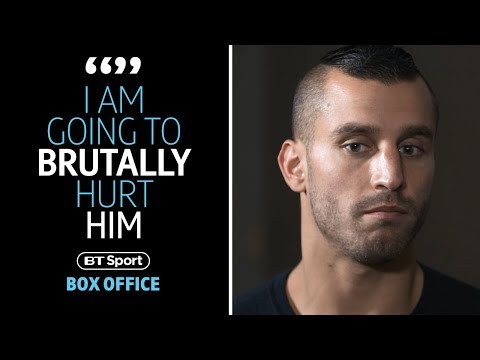 Lemieux, 29, will be fighting the 34-year-old O’Sullivan of Ireland on the Canelo vs. Gennady ‘GGG’ Golovkin undercard at the T-Mobile Arena in Las Vegas, Nevada. Lemieux-O’Sullivan is a compelling fight, as matches two of the more entertaining fighters in the 160 pound division against each other. Both Lemieux and O’Sullivan are easy to hit, highly flawed and beatable when facing the fighters from the highest rung of the middleweight division. But at the same time, they both can punch with incredible power and are capable of ending a fight at a moment’s notice.

Lemieux is a little younger and more explosive than O’Sullivan. However, Lemieux starting to show signs of having outgrown the 160 pound weight class, and he’s not been effective in his last three fights against Karim Achour, Billy Joe Saunders and Marcos Reyes. Whether that’s because of Lemeiux being weakened from battling with the weight or simply him being exposed by decent talent is the important question. On paper, Lemieux should have been able to destroy Reyes and Achour, but he didn’t. He had problems against both of them.

“He’s a very ordinary type of fighter,” Lemieux said. “He’s strong, but I’m much more explosive than he is, so I’m not going to have a problem with him. I think he’s scared. He’s a tough guy, so he might make it through five rounds. He’s definitely not going to go the distance. I’m not going to let him go the distance. I want to damage him for life. I want to tear his head off. He’s a very disrespectful guy. He has no class. He’s putting fuel on the fire. I’m going to give him a lot of misery,” Lemieux said.

Lemieux hasn’t been this upset at an opponent since his fight with Curtis Stevens last year. Lemieux smashed Stevens by a 3rd round knockout. That was supposed to have been a competitive fight, but Lemieux finished it quickly after nailing him with a big left hook. The referee Charlie Fitch stepped in and stopped it right away after Stevens hit the deck. The shot that Lemieux hit Stevens with would have knocked out anyone in the middleweight division. Golovkin and Canelo wouldn’t have been able to stand up to a shot like that from Lemieux if he hit them with it. 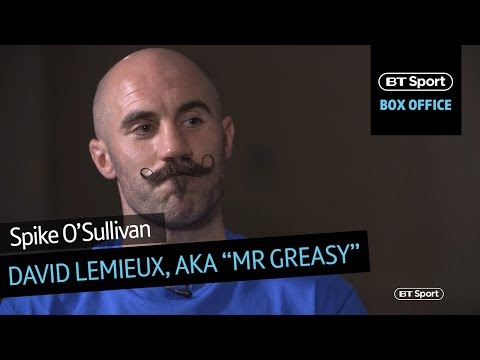 Lemieux wants to fight the Canelo-Golovkin2 winner. He feels he has unfinished business against GGG from having been knocked out in the 8th round by him three years ago in October 2015. Golovkin doesn’t seem to care about fighting Lemieux a second time, but you never know. If Lemieux looks good enough and if GGG destroys Canelo on Saturday, then there’s always a chance of a Golovkin-Lemieux rematch.

“It’s an interesting fight. Canelo looks small,” Lemieux said about the Canelo vs. GGG 2 fight this Saturday. “He has a shot to knock anybody out. I would definitely want to fight Canelo and GGG. I want revenge against Golovkin. He fought me at his peak, and I want to fight him at my peak. So there’s definitely unfinished business between him and I. First, I’ll knockout O’Sullivan, the big mouth, and then we’ll see,” Lemieux said.

Lemieux didn’t say anything about his unfinished business with Joachim Alcine, Billy Joe Saunders or Marco Antonio Rubio. Those guys all beat Lemieux as well. If Lemieux wants to start somewhere in avenging his loses, then he should be looking at some of the low hanging fruit before he starts going after the tougher fighters like GGG. Unfortunately for Lemieux, Rubio and Alcine appear to be finished as fighters. They haven’t fought since 2015 after losing fights. Like I said, Lemieux’s best shot at a big fight is against Canelo, because Golden Boy isn’t likely going to match their red-headed star against the dangerous fighters like Jermall Charlo, Demetrius Andrade, Saunders or Jacobs. O’Sullivan and Lemieux are both vulnerable to a fighter like Canelo. They would still have a puncher’s chance of beating Canelo, but it’s unlikely they would beat him because of his hand speed and defensive skills. That could change in the future once Canelo starts aging, but not right now. He’s still too quick for either of them.

“In his last fight, he fought a 147 pounder, a welterweight,” Lemieux said about O’Sullivan. ”He’s fighting a real man now, so it’s a different thing. He’s a big lion when he’s in with a smaller opponent that’s weaker. So now that it’s stronger opposition, let’s see how he reacts. He opens his mouth, so now I can see what kind of trash he is. I’ll take care of him on Saturday. Any man who beats a woman is a coward. He looks like the type to beat a woman. We’ll see how long this lasts,” Lemieux said.

It was a strange move for Golden Boy to match O’Sullivan against welterweight Berlin Abreu in his last fight on May 4. O’Sullivan should be fighting better opposition than that, but it looked like Golden Boy didn’t want to take any chances with him getting beaten and then not being useful as a potential future opponent for Canelo Alvarez.

If Lemieux is in shape and not weakened in making the 160 pound limit on Friday, then this fight is his. He’s a better fighter than O’Sullivan is, and he has the speed and the experience to do the job. Lemieux takes a pretty good shot, so he should be able to hang around long enough to knockout O’Sullivan. However, both guys can end this fight with one punch. If O’Sullivan lands something big at any point in the fight, then he could stop Lemieux. O’Sullivan has the momentum right now with his career in winning his six fights against Berlin Abreu, Antoine Douglas, Nick Quigley, Chauncey Fields, Ronald Montes and Jaime Barboza. Those guys aren’t as dangerous as Lemieux though, so the victories don’t mean as much as one would think. The last time that O’Sullivan fought a good opponent in Chris Eubank Jr., he was stopped in the 7th round in 2015. 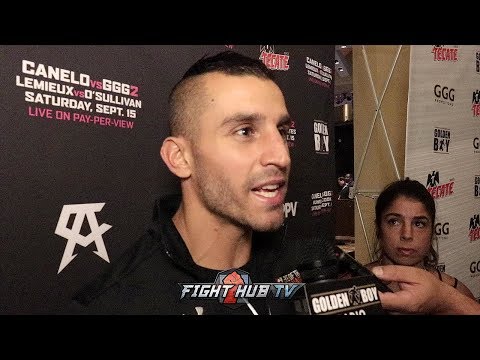 
« Sanchez: Golovkin will wear Alvarez out from the punishment – GGG vs Canelo