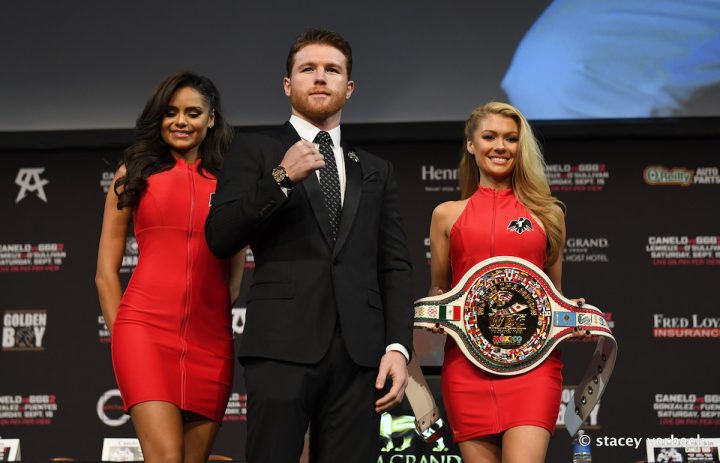 By Logan Garcia: ESPN analyst Teddy Atlas is picking the slimmed down Saul Canelo Alvarez to defeat Gennady Golovkin in their rematch this Saturday night. Atlas says he thinks Canelo might have been using performance enhancing drugs in the past for the first fight with GGG, but he’s not sure. Like a lot of boxing fans, Atlas has noticed the difference in Canelo’s body size from the way he looks now compared to how he looked in the previous encounter with the Kazakhstan fighter.

Atlas doesn’t understand why Canelo trimmed down in dropping muscle weight given the success that he had in the first fight. As far as Atlas is concerned, Canelo shouldn’t have tinkered with success. If he was able to do well against Golovkin with all the muscles he had, then he should have stuck with that. Canelo (49-1-2, 34 KOs) has chosen to slim down for the second fight with Golovkin because he knows that his only weakness in the first fight was his stamina

“In the first fight, he seemed to have Canelo where he wanted him right up against the ropes, and he didn’t take it to the next phase,” Atlas said about Canelo to fighthub. “He let him off the hook. I thought he won the fight. I thought he got robbed. Time and time ago when he had him against the ropes, he stepped out. He wasn’t getting countered. After One, two, three rounds do you think a fighter begins to put it all together? Do you figure, ‘I should stay in there”

There was a failure on Golovkin and his trainer Abel Sanchez’s part to take advantage of Canelo fighting off the ropes. Both of them are to blame for them not attempting to capitalize on that. Canelo was all bulked up, unable to fight hard because of his excess weight, and needing to rest throughout each round. Instead of Sanchez ordering Golovkin to go after the depleted Canelo, he had him boxing on the outside with his jab. It was sorry excuse for a game plan, and Golovkin fought like he had no sense in his head. He fought like a robot, and deserved to lose the fight.

”The second time, does Golovkin look at tapes,” Atlas said. ”Fighters should look at tapes. Does he look at tapes and say, ‘Yeah, I should do a little more.’ I thought there was a little more diversity in the approach of Canelo. I’m going with Canelo,” Atlas said in picking Canelo to beat GGG. “He gained confidence. He learned from the first fight. Maybe he was on something. Maybe he’s going to look inward and find out what he is, which is powerful,” Atlas said,

Atlas may have jinxed Canelo now that he’s picked him to win the fight on Saturday. Atlas has rotten luck with his predictions sometime, and he may have ruined Canelo’s chances of winning the fight. I think

“I know who the bigger guy was and that was Canelo,” Teddy Atlas said. “Now he’s the smaller guy. So I know that’s a big difference. Canelo looks like the smaller guy, which he was supposed to look like in the first fight. So what’s going on? Canelo is the smaller guy now and people will say that’s an advantage for Golovkin. But Golovkin is a year older. Maybe they’re geniuses, Golden Boy’s people, because remember when they were talking about making his fight six years ago, and I said it’s not going to happen. I know business. I know boxing. Golden Boy wasn’t going to take a chance with their golden goose to get killed by a guy that was dominating at the time, and he was the bigger guy. Golovkin looked like the bigger, stronger guy. They were not going to do it. They were going to wait and they waited until all of a sudden Golovkin looked kind of ordinary in their eyes against Daniel Jacobs, and then all of a sudden they got interested, 4 to 5 years later. So maybe they really are geniuses where they found out a way to make him [Golovkin] get a year older where they allowed themselves to get suspended. They let time go by and a whole year goes by. Golovkin, who is a year older, and now he really might be older. I think Golovkin has been sliding a bit, and you might see more deterioration. I think it’s going to be interesting because you’re going to see deterioration and potentially an older fighter against a guy that is smaller now than the first time,” Atlas aid.

Atlas isn’t giving Canelo much credit at all for being an incredible fighter. Golden Boy didn’t wait six years to match Canelo against Golovkin because they were trying to protect their flagship fighter. They waited to make the fight because there wasn’t enough interest in a fight between them if they had made the fight years ago. Golovkin wasn’t popular, and Canelo was still fighting at 154. It wasn’t until Canelo moved up to middleweight

”What am I going to think? I think PEDs,” Atlas said about his thoughts on Canelo’s smaller physique. “What do you think? when you see something that dramatic. He [Canelo] failed two drug tests, and you see him smaller. He was saying about beef, right? The reason because of tainted beef. All I know is something has changed. Something that made his body bigger is no longer making his body bigger. I don’t think he ran into a bunch of buffets before the first fight. Coincidental, I guess. Coincidental that he failed two drug tests, and then suddenly he looks dramatically different. I don’t know. We do all this testing in sports. Maybe we should do polygraphs. Maybe we should do lie detector tests. It would be another test to get around,” Atlas said.

It sounds to me like Atlas doesn’t believe in Canelo. For Atlas to talk the way about Canelo’s physique seems to suggest that he gained weight with some help. Canelo didn’t put on that much weight for the first fight. He looked bigger in his fight with Julio Cesar Chavez Jr. than he did against Golovkin. Canelo just packed on muscles by hitting weighs and eating. The muscles helped Canelo dominated Chavez Jr. while fighting at half speed.

”It’s pretty dramatic [Canelo’s weight loss] if you see the difference. Could he have been on a weight program? Yeah, which built himself up, yeah?” Atlas said. ”I guess he could have, but to see that kind of difference and why? Why would you, because he was coming on late in the fight. Why would you make such a dramatic change when he did pretty good in the first fight? Nobody knew if he could handle that kind of a step up in class and weight. He found out, Canelo, that he belongs at that level, and that he could handle that class,” Atlas said.

”You can make an argument from a trainer’s standpoint that he lost the early rounds and was trying to survive, and that he was trying to find himself,” Atlas said. ”You can take that and piggyback into this fight where he can continue where he left off from the previous fight. A year, year, at this level,” Atlas said about Canelo’s time off from boxing being a factor. “I’ve seen guys that are inactive where it shows in the early rounds. I wouldn’t suggest it, that’s for sure,” Atlas saying it’s not a good idea for Canelo to get off to a slow start against GGG. “The age [could be a factor]. Canelo is 28 and Golovkin 36, but Golovkin is showing some dissipation, that’s fair to say, a little slide. Now it’s a year later. How does it play out? When I talk about age, I don’t just talk about chronological age. I think about the amount of punches they took. If you look at Golovkin, he had 400 amateur fights. That’s a lot. If it’s going to show up, all the punches he took, it’s going to show up right now. He wasn’t 36 when he won a silver medal. His skill level and his technique hasn’t been improving in his last several fights. He’s more one dimensional in his approach. His leg and his ability to counter punch,” Atlas in talking about some of the advantages Canelo has going for him. “His ability to switch it up a little bit,” Atlas said about Canelo. “His ability to come get you and switch it up and set traps and do other things. Golovkin was trying to knock on the door and try and barge his way in.”

Teddy is telling it like it is in picking Canelo to beat Golovkin. The man knows his stuff and is a straight shooter. This actually might be one of his predictions that comes true.