Sanchez: Golovkin will wear Alvarez out from the punishment – GGG vs Canelo 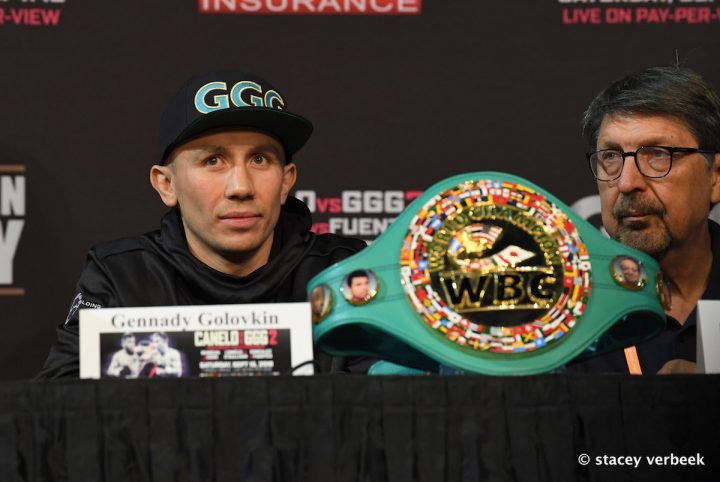 By Sean Jones: Saul Canelo Alvarez will be worn out and stopped by Gennady Golovkin this Saturday night, according to his promoter Abel Sanchez. He’s predicting that the bigger and more powerful GGG is going to take the fight to the 5’8” Canelo and give him a beating until he wears down and is halted in their rematch on HBO PPV at the T-Mobile Arena in Las Vegas, Nevada.

Golovkin giving Canelo a beating will be a huge embarrassment to the Mexican star. It might cause Canelo’s remaining boxing fans to jump ship and abandon him entirely.

Canelo’s physique has deflated from the muscular fighter that fought Golovkin in their first fight last September. The muscles have been trimmed off by the 28-year-old Alvarez in hopes of improving his conditioning enough for him to hold up to the fast pace that Golovkin will be setting on Saturday. Canelo couldn’t handle the pace of the fight last time he fought Golovkin. This resulted in Canelo needing to rest on the ropes and move to escape the pressure and slow the fight down. This time, Golovkin is going to put even more pressure on Canelo to finish him an not allow the Nevada judges put their own stamp in deciding the winner and the loser.

“I see Canelo wearing out because of the punishment. Golovkin is a much, much better fighter than Canelo,” Sanchez said to TMZ.com. “I think that if Canelo is true to his word that I think this fight ends somewhere after the 10th, when Golovkin has dropped him once or hurt him a couple of times.”

Canelo’s loss of size and his emphasis on training for endurance is a sign to some boxing fans that he’s going to run more on Saturday than he did in the first fight. Canelo’s size reduction with his muscle mass is going to make it harder for him to stand in the pocket and fight with Golovkin, because he’s effectively turned himself into another Kell Brook with his physique. Golovkin broke the smallish 5’9” Brook with his pressure until he quit in the 5th round. Canelo, 5’8”, is around the same size as Brook is now that he’s taken off all the muscle mass that he had for the previous fight, and that’s going to make it very hard for him to be able to stand up to Golovkin’s power and natural size advantage on Saturday night.

If Golovkin and Sanchez need to assume that Canelo is going to fight the same way that he did the last time he fought him, because that’s the only way he can fight. Canelo has always looked to slow his fights down when he’s fought guys that have pushed a fast pace against him. He’s not going to change his way of fighting now at 28 against the best middleweight in the division. Canelo needs the fight to be fought in a slow methodical manner for him to land enough pot shots to win rounds. If Golovkin makes Canelo boil over, then he’s going to gas out quickly and wind up getting stopped. The chances of Canelo standing and fighting Golovkin in a war are slim.

This is a revenge fight as far as Golovkin is concerned. He wants to get Canelo back for his controversial draw that he was given last time they fought, and he wants to pay him back for his two positive tests for clenbuterol. Golovkin and Sanchez still aren’t buying Canelo’s tainted beef excuse that he gave for his positive tests last February for the substance. They think Canelo is a cheater, who tried to get an edge against them with the use of a banned substance.

If Canelo runs to his left the entire fight, he’s going to get caught by Golovkin and forced into a war. Canelo can’t win by running from Golovkin like he was doing from rounds 3 to 12 last time he fought him. The judges aren’t going to give the fight to Canelo if he’s in reverse gear like he was each time Golovkin was coming after him to attack him with shots. Canelo must stand and fight, and that’s where his problems will start. He’s going to get worn down from the heavy shots from Golovkin and likely stopped. That’s how this fight is going to likely play out. Canelo can’t run from Golovkin without being hunted down and stopped. If Canelo does run, he’s going to be humiliated by Golovkin, because it’s going to be much more blatant this time than it was in the first fight due to the pressure he’s going to be under. Golovkin is going to hunt Canelo down and wear him out on Saturday. That’s my prediction. It would be better for Canelo to stand and fight like a warrior because he can at least go out on his shield like a hero rather than looking like a frightened fighter, but I don’t think he’s got it in him to fight like that. Canelo has arguably been a weight bully his entire career and now that he doesn’t have the advantage on his side, we’re seeing how frightened he is.

Canelo’s physique doesn’t look sturdy enough to stand up to the physical pounding that he’s going to be under against GGG on Saturday night. I know that Canelo thinks he’s going to do better due to his trimmed down physique, but I think it’s going to work against him. He was better off before when he was bulked up and looking like a light heavyweight against GGG. Now that Canelo has trimmed down to his natural 154 pound self, he’s going to be squashed by the bigger and much more powerful Golovkin. GGG was more powerful than the bigger version of Canelo last time they fought. Just imagine what GGG is going to do to Canelo now that he’s going to be much smaller than last time. Canelo looks to me like he’s 10 to 15 pounds lighter than he was in the first fight. That lack of muscle is going to make Canelo weaker and more susceptible to Golovkin’s huge shots to his head and body.

Golovkin’s body punching could play a huge part in this fight. Golovkin didn’t throw body shots in the first fight and that allowed Canelo to make him look sloppy with the way he was missing. Canelo was dodging everything that GGG was throwing to his head. In the rematch, Golovkin is going to be targeting Canelo’s midsection and find lots of success in hurting him. If Golovkin stays committed to throwing body shots, this fight could end as early as the 3rd round, because Canelo doesn’t take body shots well at all. Even light punchers like Austin Trout and Floyd Mayweather Jr. were able to hurt Canelo with their body shots.

As you can see, Canelo is looking very thin and too small now that he’s taken off a lot of muscle:

Gracias a todo mi equipo por un gran campamento estamos listos!! Nos vemos a la 1:00pm en MGM 🥊🇲🇽🥊Thank you to all Team Canelo for such a great camp. We are all looking forward to meeting you at the MGM today at 1pm #caneloggg2#teamcanelo#15deseptiembre

Boxing » Canelo Alvarez » Sanchez: Golovkin will wear Alvarez out from the punishment – GGG vs Canelo