Miller sees no point in facing Whyte right now because he doesn’t have a world title in his possession. As the WBA mandatory, Miller will get a world title shot against Charr soon, and he intends on using the belt as a bargaining chip to get bigger fights against the likes of Anthony Joshua. Without the WBA title, Miller isn’t in as good a position to get the fights that he wants.

Whyte (24-1, 17 KOs) needs an opponent for his next fight in December, and his promoter Eddie Hearn of Matchroom Boxing has three names – Miller, Dereck Chisora and Dominic Breazeale – that he wants him to pick from. Miller is making it clear that he doesn’t want the fight with Whyte, because

#3 WBA Miller (21-0-1, 18 KOs) is the mandatory challenger to WBA champion Charr, and he plans on facing him after his match against Adamek next month. Charr, 33, is defending his WBA title this month against 45-year-old Fres Oquendo (37-8, 24 KOs) on September 29 in Cologne, Germany. Oquendo hasn’t fought in four years since losing to Ruslan Chagaev by a 12 round majority decision in July 2014. As such, Charr will likely have no problems defeating the inactive Oquendo and then face Miller in his next fight.

Miller, 30, recently signed a 2-fight deal with Hearn to fight on DAZN. Depending on how successful Miller is in those two fights, he may re-ink with Hearn or sign with one of the American networks HBO or Showtime.

“Even though Dillian Whyte fought nobody other than Joseph Parker, and now he’s going to fight AJ again, supposedly in April,” Whyte said to Thaboxingvoice. “I’m going after Manuel Charr to get the WBA belt, and then I’ll fight an English guy.”

Manuel Charr is a fight that Miller will likely have no problems winning. Charr has lost in the past when he’s fought good opposition in Vitali Klitschko, Mairis Briedis, Johann Duhaupas and Alexander Povetkin. Last November, Charr defeated 41-year-old Alexander Ustinov by a 12 round unanimous decision to capture the World Boxing Association heavyweight title in Germany. It was a good performance by Charr against an old and slow Ustinov. The WBA made it easy for Charr to win the WBA title by having a fight between him and Ustinov instead of a better heavyweight like Miller, Kubrat Pulev, Whyte or Alexander Povetkin.

“For what,” Miller said when asked whether he would be willing to fight Dillian Whyte. “I want that WBA belt. I get more bragging rights and I can take it from there. He [Whyte] gets 3, 4 easy fights and then he fights Joseph Parker. I do want Dillian Whyte, but I want that Charr belt first, and if AJ is still being a [expletive] then I’ll go fight Dillian Whyte and knock him out, but I want that Manuel Charr belt. You get more bargaining [room with the WBA title]. I did a 2-fight deal with DAZN; this fight [Tomasz Adamek] and the next fight. After this fight, Manuel Charr next,” Miller said.

Miller might be overestimating the value that the WBA ‘regular’ title belt will give him in trying to bargain for bigger fights. The WBA title that Charr currently holds is a secondary belt, and not the main one, which is held by Anthony Joshua. Since Joshua already has the upper level WBA title, it’s not going to interest him as much to fight a lower level title holder like the one that Miller will likely soon have in his possession. If anything, Miller will get bigger paydays in defending the WBA title against the contenders in the WBA’s rankings. Miller can use the WBA title to get a better deal in a title defense against the likes of Dereck Chisora and Whyte.

Joshua might still fight Miller simply because Hearn will likely give him a new deal to stay with DAZN in order to get American boxing fans to subscribe to see the fights. For Hearn to get American fans to pay $10 per month to subscribe to DAZN, he needs U.S boxers, and that means he needs heavyweights like Miller. American fans aren’t going to get excited at subscribing to DAZN to see guys like Dillian Whyte and Chisora, because those are UK fighters that the casual American boxing fans have never heard of and don’t care about.

It doesn’t matter all that much that Miller isn’t interested in facing Whyte, because it’s unlikely that he would have been picked out by him for his December fight. Whyte is talking about wanting to fight Dereck Chisora next. However, putting that fight together may prove to be a formidable task because of the money that both fighters will be asking for. Whyte will want the lion’s share of the revenue for a fight with Chisora. It won’t be worth it for Chisora if he’s only getting a small chunk of money for an important fight like that.

”Eddie Hearn is trying to manipulate the heavyweight division to keep certain guys [Deontay Wilder, Miller and Luis Ortiz?] away from AJ. I get it,” Miller said. I’d take $2.5 million to fight Chisora. I’ll fight Manuel Charr for the belt for a quarter of that, because he has a belt. I want Manuel Charr first,” Miller said.

Miller’s comments about Hearn manipulating the heavyweight division to keep some of the heavyweights away from Joshua are what many boxing fans believe to be the reason why we’ve not seen WBC champion Deontay Wilder facing AJ. That fight should have been made as far back as 2016, but Hearn has dragged his feet in putting it together. Hearn says he wants to put the Joshua-Wilder fight together in April of next year, but it doesn’t look like that’s going to happen. Whyte is the one that is going to be the likely opponent for Joshua to fight. Miller will have to wait his turn for a fight against Joshua. He’ll eventually get the fight if he wins the WBA belt and if he keeps winning long enough. 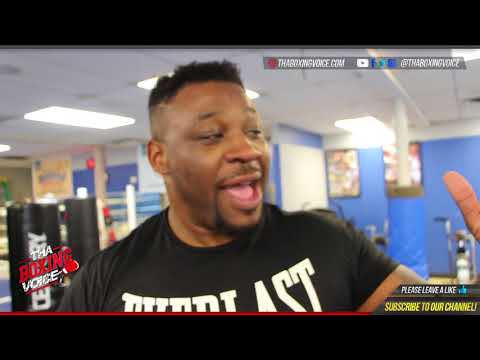 
« Mosley: Golovkin is too big for Canelo

Povetkin says Joshua will either box or brawl with him on Sept.22 »