Povetkin says Joshua will either box or brawl with him on Sept.22 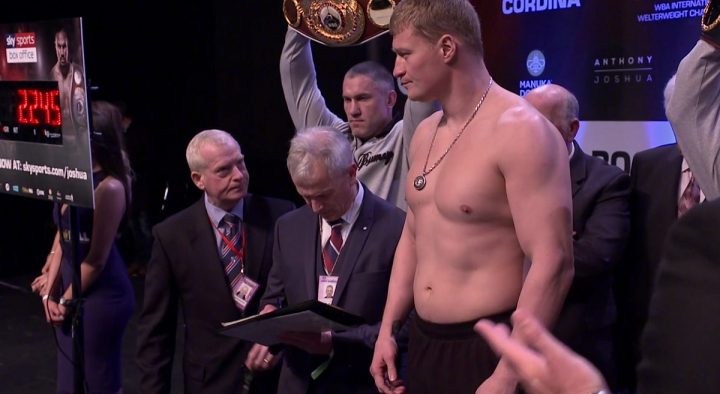 By Scott Gilfoid: Alexander Povetkin (34-1, 24 KOs) isn’t quite sure what to expect from Anthony Joshua (21-0, 20 KOs) in their fight on September 22 at Wembley Stadium in London, England. Povetkin says Joshua only has two options – slug or box, and he plans on being ready for both. Up until Joshua’s last fight against Joseph Parker, he was a pure slugger, who depended on his 6’6” 250 pound size to win his fights.

Against Parker, Joshua showed a different side to his game in boxing him for the full 12 rounds instead of looking to smash him. The Joshua obviously made the change in his game after being hurt in his two previous fights against Carlos Takam and Wladimir Klitschko. Joshua was not only hurt in those fights, but he also ran out of gas from exertion. Against Parker, Joshua wasn’t going to let that happen to him in a third consecutive fight, so he chose to stay on the outside and box the entire fight.

Joshua was helped in keeping the Parker fight at range by the referee, who prevented inside fighting from taking place. The referee looked like he was working his first fight and didn’t realize that inside fighting is allowed in boxing. If Povetkin has to deal with a similar referee on September 22, then his chances of beating Joshua will be virtually nonexistent. For Povetkin to win, he must get inside on Joshua to land his shorter punches.

”We have two scenarios – whether Anthony Joshua will decide to have a rumble, or he will keep the distance,” Povetkin said to skysports.com. ”There is never any thoughts about losing. I think just about coming to the ring and winning. I do everything for that.”

To get ready for Joshua’s huge size, the 39-year-old Povetkin has been using British heavyweight prospect 6’5” Daniel Dubois as a sparring partner. The 20-year-old Dubois is a 240 pound heavyweight with identical size and power that Joshua possesses. Dubois is a little more rugged, and he’s more focused on throwing body shots. Some boxing fans believe Dubois will soon surpass Joshua to become the best heavyweight in the UK. We can’t say that Joshua is the best in the world, because he’s not faced the best fighters in Deontay Wilder and Luis Ortiz. A recent photo of Povekin and Dubois was released this week. Povetkin looked marked up in the face, as if he’d just gone through a hard sparring session.

Povetkin defeated 6’8” David Price by a 5th round by a 5th round knockout on March 31 on the undercard of Joshua’s fight against Parker at the Principality Stadium in Cardiff, Wales. The 34-year-old Price showed that he can still punch in knocking Povetkin down in the 3rd round after catching him with a big left hook that he never saw coming. Povetkin came back strong and battered Price until knocking him flat in the 5th round.

”This is going to be a very hard fight for Joshua,” Price said to sportingnews.com. ”When I look at the opposition that Joshua has fought, then I put Povetkin very close to the top of the list; maybe not as good as Klitschko, but certainly a level above the likes of [Dillian] Whyte and Parker. So, it’s definitely a fight where I feel that Joshua will need to have a little to think about what’s in front of him because Povetkin does so many things well,” Price said.

Povetkin lost a one-sided 12 round unanimous decision to Wladimir Klitschko in 2013. That’s the only loss of Povetkin’s career. Wladimir knocked Povetkin down four times in the fight. However, Wladimir spent much of the fight clinching Povetkin to keep him from letting his hands go on the inside. It’ll be interesting to see if Joshua uses the same strategy to neutralize Povetkin’s ability to fight on the inside and at medium range. Joshua hasn’t been known for being a clincher, but he also wasn’t known for being a boxer until his last fight against Parker. If Joshua decides to tie Povetkin up all night long on the inside, then it’s going to be up to the Russian fighter to decide what he can do to keep AJ from using this tactic. Povetkin likely won’t be able to count on the referee to step in and stop Joshua from holding, because the fight is taking place in the UK and it’s hard to imagine the referee stopping AJ from doing whatever he pleases inside the ring. Povetkin will need to slam his punches home before Joshua wraps him up in a bear-hug to try and stop him.

It’s almost assured that Joshua will use his jab to try and control the fight from the safety of the outside. Povetkin hits too hard for Joshua to allow him to get close enough to land one of his big left hooks and right hands. Joshua is a huge guy, but his ability to take head shots isn’t much better than Price’s. The shots that Joshua was hurt by in the Klitschko, Takam and Dillian Whyte fights weren’t out of the ordinary.

Povetkin can punch with similar power as those guys, which is bad news for Joshua if he lands one of his big shots on the button on September 22. We might see Joshua flat on his back the way Price was after Povetkin knocked him for a loop on last March. If Povetkin hurts Joshua, you can count on him finishing him off. In other words, Povetkin won’t decide that it’s a good idea to box Joshua if he has him stumbling around the ring like a drunk the way Wladimir did. No one will ever know why Wladimir didn’t go for the coup de grace after he had Joshua on the canvas in the 6th round in their fight in 2017. Some boxing fans think Wladimir showed mercy for Joshua out of kindness, because he didn’t want to derail his career just as it’s getting started. I don’t know. If Povetkin hurts Joshua, he won’t decide to box him, you can count on that.

#SUPERFLY3 undercard to be streamed on Sept.8 »