Mosley: Golovkin is too big for Canelo 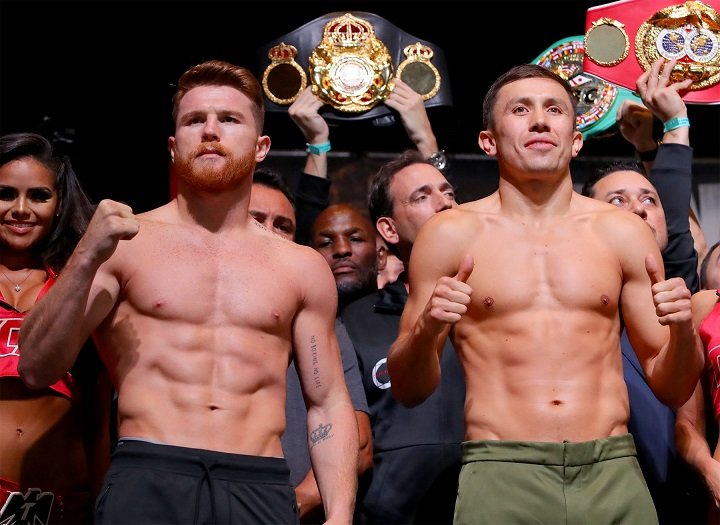 By Dan Ambrose: Sugar Shane Mosley says IBO/WBA/WBC middleweight champion Gennady ‘GGG’ Golovkin will have too much size and power for Saul Canelo Alvarez in their rematch. In Mosley’s view, the Canelo-GGG 2 dynamics come down to size and strength. He sees Golovkin as simply too big for the 5’8” Canelo. It was that way last time they fought, and it’s likely going to be amplified with taking weight off for the rematch on September 15.

Canelo used movement to minimize GGG’s size advantage in the first fight. Canelo wasn’t going to let Golovkin have too many chances to impose his size and will on him. Using movement made it harder for Golovkin to get to Canelo to land. In the meantime, Canelo pot shots to try and win the rounds. It was a hit and run approach, and it worked for Canelo impressing judges Don Trella and Adalaide Byrd, but not the third judge Dave Moretti, who scored the fight to Golovkin by a 115=113 score.

Mosley has studied the Canelo-Golovkin fight from last September, and he noted that Canelo didn’t want to fight in the 11th and 12th rounds. It was Golovkin that was taking the fight to Canelo, says Mosley. Canelo was tired by that point in the fight and only putting in a token effort at the starts of the rounds.

Canelo Alvarez will meet with Triple G in their second fight on September 15 on HBO PPV at the T-Mobile Arena in Las Vegas, Nevada. Canelo and GGG fought to a 12 round draw a year ago on September 16 at the T-Mobile Arena. Draw was controversial. There appeared to be a winner in that fight with GGG outworking Canelo, but the judges called it a draw.

“GGG was coming on in the 11th and 12th rounds, and Canelo didn’t really want to fight in the 11th and 12th,” Mosley said to Mayweather Boxing Channel. “So I’m going with GGG, because he’s bigger and he has power, and he’s consistent and he’s strong and fearless and he goes in there and he fights.”

The judges gave Canelo rounds 10, 11 and 12. Canelo fought better in the last three rounds than he did in rounds 3 through 9, which was when he was exhausted looking and not letting his hands go. Still, Golovkin still appeared to have done enough to win the last three rounds. It was one of those fights where the judges were scoring the fight for the A-side fighter and giving the B-side fighter the shaft.

“I think Canelo is the better technician, but GGG is a little too big for him in the weight class at 160,” Mosley said. “It’s kind of like when I fought Winky Wright at 154. I punch hard, but when I was punching him, it didn’t do anything. Canelo is probably going to be in the same thing. He has good stamina, but I think GGG is too big for him,” Mosley said.

The 5’8 ½” Shane Mosley lost twice to junior middleweight Winky Wright in 2004 in getting beaten by 12 round decisions. It was a situation where the 5’10 ½” Wright had too much size for former lightweight world champion Mosley to deal with. Canelo, 5’8”, is even shorter than Mosley and he has a shorter reach as well. Golovkin, 5’10 ½”, is taller than Canelo by 2 ½” inches, and he was able to use his size when the two were far apart. Golovkin was jabbing Canelo and forcing him to defend without being able to counter. Golovkin could have fought the entire fight on the outside and kept Canelo from landing anything just as Floyd Mayweather Jr. had done in 2013 in beating the red-haired Mexican star by a 12 round decision, but GGG wanted to make it exciting by going for the knockout. That’s why he was attacking Canelo with power shots instead of staying at a distance to jab the shorter-armed fighter at will last September.

Super middleweight Bilal Akkawy (17-0-1, 14 KOs), who Canelo is using as a sparring partner for the GGG rematch, believes that he can win the fight due to his intelligence.

“It is one of the hardest you can imagine, as a sparring one tries to help Canelo arrive at his best, and I see him very focused, very solid, very intelligent and with a very good physical condition,” Akkawy told ESPN Deportes in giving his thoughts about Canelo after sparring him. ”They will see the best Canelo and I do not doubt that he will win.”

The Australian Akkawy recently beat former WBA super middleweight champion Giovanni De Carolis by a 10 round unanimous decision in what is clearly the biggest win of his career.

Since Akkaway likely hasn’t ever sparred with Golovkin before, it doesn’t mean as much that he feels Canelo will win the fight. His experience at sparring is limited to just Canelo. To make a more accurate prediction, Akkaway would need to spar both fighters back to back, and then his prediction would hold more weight. But even then, sparring is a different thing than actual fighting. Golovkin is said to spar at only 50 percent rather than going all out. If he maxed out at full throttle during his sparring sessions, it might make it tough for him to get sparring partners.

“Having the experience of being sparring with Canelo has been an honor,” Akkawy said. “He is a very intelligent boxer in the ring, with great strength and many resources that he demands.”

Canelo will try and use intelligence to beat Golovkin in the rematch just as he did in the first fight. Canelo’s loss of muscle mass for the rematch with Golovkin is a sign that he’s going to try and use more movement in the second fight than he did in the first. Canelo has been saying that he’s going to stand and fight GGG to knock him out on September 15, but that doesn’t make sense when you factor in his huge weight loss. Canelo was too small last time he fought Golovkin. Now that Canelo has lost weight, he’s going to be even smaller, and that can mean only one thing. He’s going to try and box his way to a decision over GGG in the rematch.

NEWS:   Eddie Hearn wants Golovkin to confront Canelo about his distain for him

Golovkin’s promoter Tom Loeffler says he’s not sure what De La Hoya is talking about, as he says GGG did want the national anthems played before the Canelo rematch on September 15:

“I have no idea what Oscar is talking about but it is not true. The truth is Team Golovkin had requested that the national anthems of Kazakhstan, Mexico and the United States be sung before the pay-per-view telecast began so that we could proceed with the fights seamlessly and uninterrupted. HBO supported this position and has always preferred that the anthems take place before the HBO Pay-Per-View telecast begins. To suggest that Gennady is unpatriotic and has no respect for the anthems of his Kazakhstan, Mexico or the U.S., where Gennady resides in southern California, is patently false. Oscar and Canelo owe Gennady yet another apology.”