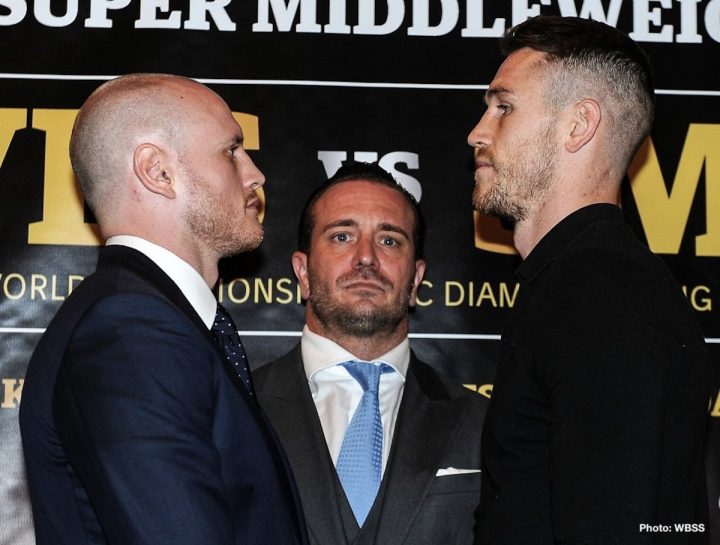 By Scott Gilfoid: In a much anticipated fight, George Groves (28-3,20 KOs) will be taking on unbeaten 28-year-old Callum Smith this Friday night in the final of the World Boxing Super Series super middleweight tournament a King Abdullah Sports City in Jeddah, Saudi Arabia. Everything is on the line for this fight for both guys. Groves and Smith will be fighting it out for the Muhammad Ali Trophy. Groves vs. Smith can be seen on DAZN live in the U.S. For those who don’t already know, this is a subscription service.

If Groves’ left shoulder holds up during the fight, he’s got a very good chance of winning this fight against the stork-like Smith, who looked terrible in his semifinal fight against the 34-year-old Nieky Holzken last February. Smith won that fight by a 12 round decision, but he struggled with the superior athleticism of Holzken for the entire fight despite having a huge advantage in boxing experience. Holzken was a replacement opponent for Juergen Braehmer, who pulled out of the tournament at the last moment after suffering an illness. Smith looked woeful during the fight, and he ended up winning based on his size, power and youth advantage rather than his boxing skills.

As long as Groves can keep from getting hurt by Smith on Friday, he should be able to win this fight. If Groves’ left shoulder allows him to stand on the outside and jab all night, he’s got a better than average chance of pounding out a decision over Smith. It’s unlikely that Groves will go looking for a knockout because it’s too risky for him to slug it out with a power punch like Smith. All it would take is one big left hook or right hand from Smith and Groves would be on his back and counted out like he was in his second KO loss to Froch. Groves will need to be careful at all times against Smith on Saturday.

Groves (28-3, 20 KOs) will have his World Boxing Association Super World super middleweight title up for grabs. Besides that, the Ring Magazine super middleweight title and the WBC Diamond 168 pound title will be fought for as well in this match. Smith (24-0, 17 KOs) is a big puncher with power along the same lines of former Groves’ conqueror Carl Froch. Smith can win the fight with one big shot if he can catch Groves with a head shot the way Froch did in stopping him twice in 2013 and 2014. Groves also was worn down by the power shots from Badou Jack in losing a 12 round split decision to him in 2015. Since then, Groves has won his last seven fights, albeit against lesser opposition. None of the fighters Groves has beaten in the last two years has measured up to what he faced in losing to Jack and Froch.

Groves’ surgically repaired left shoulder is a major question mark for the fight. Although the 30-year-old Groves’ shoulder is said to be 100 percent once again, you have to wonder if that’s true. Groves injured it just seven months ago in his fight against Chris Eubank Jr. in the semifinals of the World Boxing Super Series tournament in Manchester, England. After completely dominating the first 11 rounds of the fight, Groves chose to stand and slug with the 29-year-old Eubank Jr. (26-2, 20 KOs), who by that point in the fight was utterly desperate and badly in need of a knockout to pull out the victory. Groves’ left shoulder gave out on him under the furious attack by the energetic young Eubank Jr., forcing ‘Saint George’ to hold on after his left shoulder popped out of his shoulder socket. Groves made it through he round somehow and had his hand raised when the judges’ scores were announced. The victory was a costly one, however, due to Groves’ shoulder injury. Groves had surgery to repair the problem not long after the fight, but he’s been slow in coming back. Even now, it’s unclear whether Groves’ shoulder will be able to hold up under the heat of battle against the lanky 28-year-old Smith.

“I believe I’ve seen enough of him to put together a winning formula,” Groves said about the 6’3” Smith. “We are not underestimating him the slightest. This tournament has captured the public’s imagination. Everyone has go behind it, everyone is enjoying it.”

To be sure, the WBSS super middleweight tournament has gone largely unnoticed in the United States, as it’s not been shown on American television, so Groves is a little off when he says the tourney has “capured he public’s imagination.” The WBSS 168 pound tournament has certainly got the attention of the UK boxing public, but not the U.S, and obviously not going to. Groves’ fight against Smith is barely getting much media attention in the States. One major problem that keeps the WBSS tournament from being as important as it could be is some of the more talented fighters in the super middleweight division didn’t take part in it. Gilberto ‘Zurdo’ Ramirez, Jesse Hart, Jose Uzcategui, Rocky Fielding, Caleb Truax, Anthony Dirrell, Tyrone Zeuge and Caleb Plant didn’t participate in the WBSS tournament. Those are huge talents not to be competing in the tournament. Groves didn’t have to beat anyone all that talented to get to the final of the WBSS tourney. In Groves’ first fight in the tournament, he beat 32-year-old Jamie Cox (25-2, 14 KOs) by a 4th round knockout. Cox, a great amateur talent, had never fought a true world class fighter during his 10-year pro career at the time he fought Groves. With his inexperience at the pro level, Cox didn’t belong inside the same ring with Groves. That much was proven in the 4th round when Groves tapped Cox with a body shot and he fell over in pain and was counted out.

”Winning it will be the pinnacle of my career,” Groves said about the WBSS tournament. ”I’s the first of it’s kind and it will grow to something way beyond what it is now.”

Groves is underachieving by saying that winning the WBSS tournament will be the “pinnacle” of his career, because there are clearly better fighters than the likes of Callum Smith, Jamie Cox and Chris Eubank Jr. in the super middleweight division. If Groves can beat the likes of Gilberto Ramirez and Uzcategui, he will have achieved more than winning the WBSS tournament in the eyes of the boxing public. It’s all good if Groves wins the tournament, but you’ve got to look at the guys that he’s faced in the competition. We’re not talking about superstars, are we?

Smith can certainly win this fight if he’s smart and puts unrelenting pressure on Groves the way that Froch and Badou Jack did. Groves will break for sure if he’s pressured continuously for an entire fight. I’m just not sure that Smith has it in him to put the pressure on Groves to get the stoppage. Groves is by far the better boxer of the two, so if it goes to the scorecards, he’s going to win without a doubt. Hopefully for Smith’s sake, he realizes that his only chance of winning the fight is to knock Groves out. If Smith is under any illusions that he has a chance of winning a decision, he’ll be crying large crocodile tears afterwards when he comes up the loser.

« Nicola Adams Out To KO Millan And Wow New Fans