Gennady Golovkin: “I come back, guys, I come back 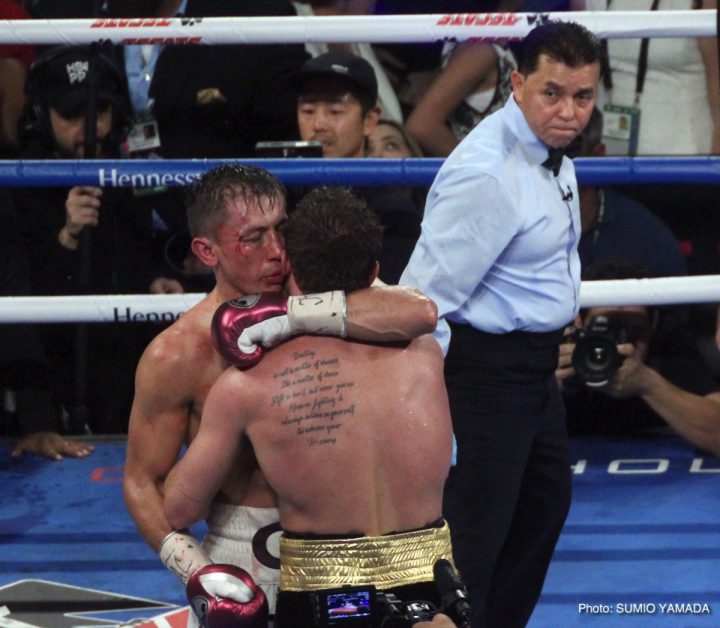 By Morgan Lopes: Gennady Golovkin (38-1-1, 34 KOs) says he plans to return to the ring to face Saul Canelo Alvarez (50-1-2, 34 KOs) in a third fight if he lets him. Golovkin, 36, lost to Canelo by a 12 round majority decision last Saturday night in their rematch at the T-Mobile Arena in Las Vegas, Nevada. Golovkin is vowing to come back for what he hopes will be a third fight with Alvarez, but the Kazakhstan fighter should think before he makes that move.

Canelo beat Golovkin in such a way last night that would suggest that he’ll beat him just as easily in a third fight. Canelo battered Golovkin, and bruised up both of his eyes. Golovkin suffered a cut over his right eye, and he looked like a defeated fighter.

Although many fans that saw the fight felt that the wrong man had his hand raised at the end, the judges saw Canelo as the superior fighter in giving him the ‘W’ by the scores 115-113, 115-113 and 114-114. This writer saw it as a clear victory for Alvarez. I had him winning by a 118-110 score. The only rounds in which you can make a case where Genndy did enough to win was in the 9th and 10th. Golovkin did enough in those two rounds to win them, but the remainder of the fight was entirely dominated by Canelo. He out-worked Golovkin, throwing more power punches and coming forward the entire time. Golovkin looked unsure of himself, tired and lacking confidence. The pressure that Canelo was putting Golovkin under was more than he could take, and he looked like he hadn’t prepared for style of fight mentally or physically. It was surprising to see Golovkin exhausted looking and getting outworked by the fresher, better conditioned Canelo. Golovkin was gasping for breath and not able to keep up with Canelo.

“I come back, guys, I come back,” Golovkin said at the post-fight press conference. “Yes, of course, we would like to have another fight. We would like to negotiate about that. It would be good to have a third fight. I wasn’t hurt. I felt fine. He wasn’t running from me in this fight. That doesn’t mean he won the fight. The scores don’t really support that he won the fight. I don’t think he demonstrated a super great boxing style. Yes, he wasn’t running away from me and running around this time. But it doesn’t mean he won the fight. He didn’t do anything special. I would like to congratulate him for the victory,” GGG said.

In fairness to Golovkin, he obviously hadn’t seen his fight with Canelo at the time that he spoke to the boxing media at the post-fight press conference. Golovkin hadn’t have a chance to see how over-matched he was in losing to Alvarez. By now, Golovkin has seen the fight and he has to realize that he was scheduled by the 5’8’ Canelo throughout the fight. Golovkin’s trainer Abel Sanchez is under no illusions that his fighter lost the fight. Sanchez seems to distance himself from the loss by saying that he warned GGG ahead of time all throughout training camp that Alvarez was going to stand in front of him and look to slug it out. Sure enough, that’s exactly what Canelo did, and Golovkin looked like he wasn’t ready for that type of fight. GGG was constantly backing up, trying get away from Canelo. Golovkin thought he could beat Canelo by boxing him, and that was never going to work. Sanchez wanted Golovkin to stay in close to Canelo and force him to fight at a fast pace, but he wouldn’t do it.

“I expected Canelo to give us this type of fight,” Sanchez said. “He was goaded into it. He had the chance to erase the issues he had last May. I believe he erased the issues he had last May. What a great champion he is. I told Gennady all throughout training camp that I thought Canelo was going to stand and trade with him. During the fight, I was trying to have Gennady made it a fight inside instead of allowing Canelo to rest. I wanted him to fight more. The fight was close where there was one round of difference. It could have gone either way. I think the last round was the one that made the difference,” Sanchez said.

Golovkin did what he could last night, but he didn’t have the engine, inside fighting skills or the speed to compete with Canelo. When Golovkin did throw power shots from the outside, Canelo always countered him with hard shots to the head and body. Golovkin became gun-shy after a while and not willing to let his hands go.

“I want to congratulate Canelo,” Sanchez said. “Canelo is a champion today. He deserves it. He fought a great fight. Hopefully, we can do this again. The judges had it one point apart, so obviously those two guys can make for a good fight. So hopefully they do it again,” Sanchez said.

Unless Golovkin is interested in a third fight with Alvarez for cash out purposes, he should move in another direction towards more winnable fights against World Boxing Association ‘regular’ middleweight champion Ryota Murata or WBO champion Billy Joe Saunders. Golovkin would have a better shot at beating one of those two fighters than he would against Canelo. The problem is that Golovkin might not be able to easily get Murata or Saunders to fight him now because of his loss to Alvarez. Look at it this way. If Golovkin fights Canelo a third time and loses, then it’s game over for him. GGG’s career will be over with. As it is, Golovkin looks to be about finished with the way he’s looked in his two fights with Canelo and his controversial victory over Daniel Jacobs in 2017. Losing to Canelo a second time would make it clear that Golovkin is done as a fighter. That’s why it would be better for Golovkin to fight Saunders or Murata, because those are fights that are winnable for him and would help him rebuild his confidence and his image with the boxing public.

Boxing » Canelo Alvarez » Gennady Golovkin: “I come back, guys, I come back