Josh Warrington vs. Carl Frampton official for Dec.22 in Manchester 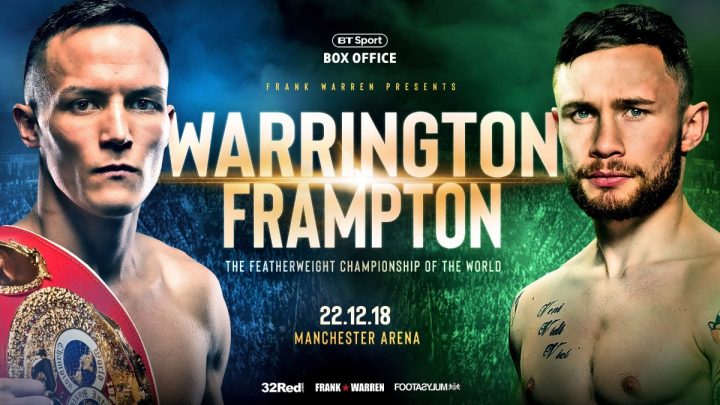 By Scott Gilfoid: IBF featherweight champion Josh Warrington will be defending his title against Carl Frampton on December 22 at the Manchester Arena in Manchester, England. The fight was made official on Saturday.

The management for Warrington (27-0, 6 KOs) and Frampton (26-1, 15 KOs) aren’t wasting any time in making the fight between them for some reason. It’s a fight that would be better to build a lot more before it takes place, but they don’t want to wait. Warrington, 27, is someone that is vulnerable, and he likely won’t be able to hold onto his International Boxing Federation title for long no matter how carefully he’s matched.

Warrington lacks the punching power to last long as a champion. Frampton, 31, is getting up there in years, and he’s got his sights set on fighting World Boxing Organization featherweight champion Oscar Valdez (24-0, 19 KOs) in 2019. That’s a bad match-up for Frampton, especially now that he’s starting to look increasingly more beatable in his fights since his two wars with Leo Santa Cruz. Valdez will likely be a huge favorite when he meets up with Frampton in 2019.

I hate to say it but Frampton is going to have some very real problems when he shares the ring with the young and highly talented 27-year-old Valdez next year. But before then, there’s nothing wrong with Frampton picking up the IBF 126 pound title from the light-hitting Warrington while he waits for that match. Valdez is currently still licking his battle wounds from his last fight against former WBA super bantamweight champion Scott Quigg from earlier this year in March. Valdez beat Quigg by a one-sided 12 round unanimous decision, but he suffered a broken jaw in the 5th round. The injury will keep Valdez out of action for a little while longer before he gets back inside the ring.

“The Frampton fight really appeals to me and it will be another big scalp for me.” Warrington said.

Those fighters are decent level fighters, but they’re not on the same level as guys like Frampton, Gary Russell Jr., Oscar Valdez, Mark Magsayo, Joseph Diaz Jr., Abner Mares, Genesis Servania and Scott Quigg. Those are the fighters that Warrington should have been fighting a long time ago to show his worth in the featherweight division. The fact that Warrington hasn’t been fighting them makes me wonder whether he’s been purposefully swerving them. I’m just saying. When a fighter like Warrington has been fighting for nine years as a pro, it’s hard to comprehend how he’s not fought any of the above mentioned fighters before. I mean, you would think that Warrington would have at least fought Quigg once or twice as well as Russell Jr. Of course, perhaps it’s a good thing that Warrington hasn’t fought those guys because if he did fight them, it might not have gone well for him. You’d like to have seen Warrington battle tested before facing a guy like Frampton, because he’s going into his fight with him without the prerequisite experience that you’d like to see to get ready for his class. You can’t count Kiko Martinez and a weight drained Lee Selby as adequate experience for Warrington to get ready for Frampton, because neither of those guys are in his league. Frampton has lost a little from his game due to age and his wars with Santa Cruz, but he’s still fighting at a high enough level to be a nightmare for Warrington.

“It’s about keeping the momentum going and I just believe I can beat Carl,” Warrington said. ”I am just as confident in beating Carl as I was beating Lee [Selby]. These are fights that the British public wants to see, I’m a world champion and when you are world champion you want to fight the best and Carl is a name who is up there,” Warrington said.

Warrington is right about the UK boxing public wanting to see him and Frampton mix it up. I don’t think there’s a tremendous amount of interest from the British fans in seeing Frampton and Warrington mix it up. The better fight would be Frampton facing Oscar Valdez or Gary Russell Jr. Those fights are more compelling by a long shot.

As far as Warringon’s signature win on his resume over Selby, it really wasn’t that great of a victory. Selby looked completely drained after making weight for their fight last May, and he had nothing left when it came time for the fight to start. Selby should have moved up to super featherweight a year ago, as he’s clearly too big for the weight class at this point in his career. If Warrington had fought Selby two to three years ago when he was still comfortably able to make the 126 pound weight limit, he likely would have lost to him. Warrington took the fight with Selby at the right time.

Frampton recently beat Luke Jackson by a 9th round knockout last month on August 18 at Windson Park in Belfast, Northern Ireland. For all intents and purposes, this was a showcase fight for Frampton to look good in front of his Irish boxing fans to stay sharp while he waited on the Warrington title shot.

Frampton lost his World Boxing Association featherweight title last year in getting beaten by Santa Cruz by a 12 round majority decision in their rematch in January 2017. Their first fight was won by Frampton by a controversial 12 round majority decision in July 2016 in New York. Frampton appeared to lose, but was given a highly questionable 12 round decision. The Santa Cruz made a blunder in agreeing to fight Frampton in New York rather than in a neutral state where the boxing fans would be more evenly distributed. New York has a large Irish community, and it appeared that Frampton was receiving all the cheering from the fans at ringside on the night against Santa Cruz. When the two of them fought each other in a rematch in Las Vegas, the cheering was more evenly split, and the judges appeared to do a better job of scoring the fight compared to the first fight. You can make a strong argument that Frampton should have lost both of his fights against Santa Cruz, as well as his fight against Horacio Garcia, which took place last November in Belfast. Garcia dropped Santa Cruz in the 7th round and dominated the entire second half of the fight. Frampton has looked a lot better in his last two fights in beating Nonito Donaire and Luke Jackson. However, neither of those guys are upper echelon featherweights.

“Me and Warrington have big fan bases that make a lot of noise, so I think first and foremost the atmosphere is going to be fantastic and possibly a bit hostile as well.” said Frampton.

This is a decent domestic level fight between Frampton and Warrington, but you’re not going to get the worldwide attention from boxing fans in seeing these two guys face each other right now. Warrington is still too much of an unknown, and there’s nothing there to make this a compelling fight for many sports fans. As I was saying, wouldn’t have been better if Warrington’s management at least had him fight someone like Gary Russell Jr. Joseph Diaz Jr. Fighting one of those guys first would have helped make Warrington a bigger name than he is right now.