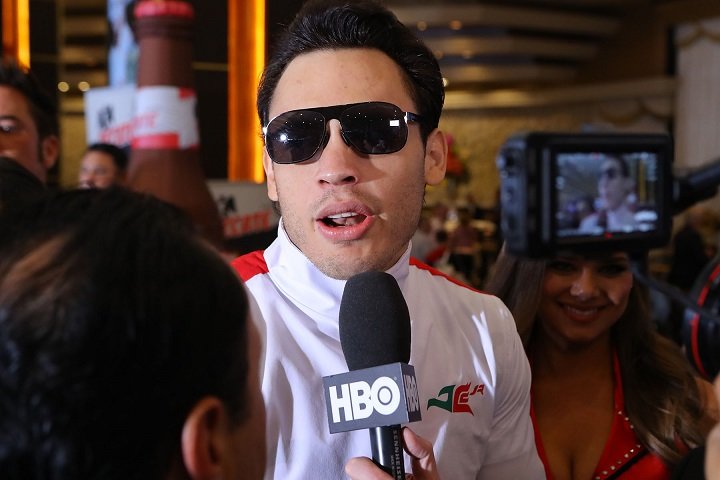 Chavez Jr. said this on his social media site on Tuesday about wanting to fight Sergio Mora and Sergio Martinez:

Peleus vs. Sergio Mora on September 7 in 171 pounds. To emerge victorious, I would like Sergio “Maravilla” Martinez to give me the rematch we never had! It’s never late … @ wonder … Let’s Go Champ.”

Not one to back down from challenges, Sergio Martinez accepted Chavez Jr’s challenge with this response:

”Exactly, it’s never too late and I would fight again just for that rematch. Accept? Are you sure?? I propose you November.”

It’s unlikely that the boxing public will have much interest in seeing a rematch between Chavez Jr. and Martinez unless it was to take place in their home countries. It’s not a fight that U.S cable networks would have a great deal of interest in televising, as the two of them looked so bad in their last fights. A rematch between Chavez Jr. and Martinez could be pure poison for cable networks. If the two of them look as shot as they did in their last fights against Saul Canelo Alvarez and Miguel Cotto, many boxing fans would be disappointed at seeing them fight.

If Chavez Jr. chooses to face Sergio Mora on September 7 as he talks about, he might not win that fight. Mora still has more than enough left in his fuel tank to beat a shot-looking 32-year-old Chavez Jr., who hasn’t fought in 15 months and is coming off of a dreadfully poor performance against Saul Canelo Alvarez in losing a one-sided 12 round unanimous decision on May 6, 2017. Chavez Jr. looked emaciated, slow and weak in getting battered for 12 rounds by Canelo. Chavez Jr. looked nothing like the fighter he’d been when he beat Andy Lee and lost to Martinez in 2012. The combination of age, inactivity, weight gain and soft living has robbed Chavez Jr. (50-3-1, 32 KOs) of the physical skills that he once had.

Sergio Martinez defeated Chavez Jr. by a 12 round unanimous decision on September 15, 2012. The judges’ scores were 117-110, 118-109 and 118-109. Despite winning the fight, Martinez’s win proved to be a costly one for him, as he tore up his right knee in round 12 when he was knocked down by Chavez Jr. Martinez’s career wound up being shortened due to the severity of the knee injury. To try and repair the problem, Martinez had three knee surgeries, but none of them were able to repair the damage to his knee. Fighting with a bad knee, Martinez retired shortly after being stopped in the 10th round by Miguel Cotto four years ago on June 7, 2014. This is a fight that Martinez likely would have won if he’d been healthy, but his right knee looked stiff and unable to hold his weight.

Sergio Mora has lost two out of his last three fights in two knockout losses to Daniel Jacobs and am eight round split decision victory over Alfredo Angulo. Mora looked bad in all three of those fights. Mora’s last impressive win came five years ago when he beat Grzegorz Proksa by a 10 round unanimous decision. Mora was beaten by journeyman Brian Vera by a 12 round majority decision in August 2012. As shot as Mora has been looking in the last three years, he still will likely easily beat Chavez Jr. If Chavez Jr. is smart, he’ll put off the fight with Mora until after he faces Sergio Martinez, because that fight will likely make him a lot more money. If Chavez Jr. loses to Mora, then he can forget about attracting boxing fans to watch him fight Marvilla Martinez. The fans won’t bother turning out or tuning in to watch the Chavez Jr-Martinez 2 fight.

During Chavez Jr’s best years, he was considered one of the best middleweights in the division. One thing that gave Chavez Jr. an advantage over his opponents was his huge size. Huge for the middleweight division, Chavez Jr. was able to melt down to the 160 pound limit to face smaller opponents. After Chavez Jr. would rehydrate for his fights, he would look like a cruiserweight inside the ring. Unfortunately for Chavez Jr., he wasn’t able to continue make the 160-pound weight limit, and he finally had to move up to move up to light heavyweight in 2013 after having been suspended following his loss to Martinez. What’s interesting is Chavez Jr. has elected to fight a series of catch-weight fights rather than fight at super middleweight or light heavyweight.

In April 2015, Chavez Jr. was knocked out by light heavyweight Andrzej Fonfara by a 9th round knockout. Chavez Jr. revealed later that he’d barely trained for the fight. Just why Chavez Jr. would take a big punching like Fonfara without training for the fight is the big question. Following the defeat to Fonfara, Chavez Jr. struggled to beat Marcos Reyes and Dominik Britsch. Chavez Jr. looked barely better than those two limited fighters. In Chavez Jr’s last fight, he was beaten by Canelo by a 12 round unanimous decision in 2017. It’s unclear why Chavez Jr. has been sitting out of the ring for over a year talking on social media and not fighting. To some boxing fans, they think Chavez Jr. has no love for the game, and is just trying to throw together money fights against shot fighters rather than staying active with his career and trying to go after world titles. Age-wise, Chavez Jr. isn’t old at 32. His inactivity and soft lifestyle has clearly hurt his game to the point where it’s unlikely he’ll ever be the fighter that he could have been had he stayed active like more serious fighters.