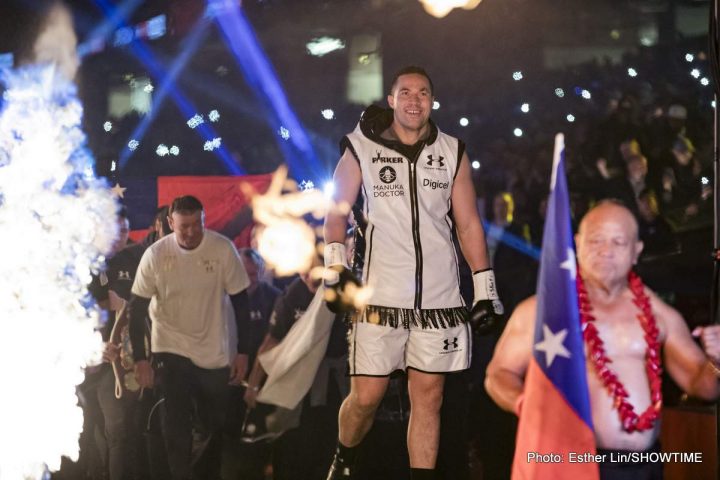 By Scott Gilfoid: Joseph Parker has decided not to appeal his controversial 12 round unanimous decision loss to Dillian Whyte from July 28 at the O2 Arena in London, England, but he does want a rematch, according to his promoter David Higgins. Parker (24-2, 18 KOs) suffered a concussion in round two when Whyte (24-1, 17 KOs) rammed heads with him, sending him down on the canvas.

The referee Ian John Lewis then made a hopelessly horrible call in ruling it a knockdown. The mistake by Lewis likely turned what would have been a win for Parker into a victory for Whyte. Additionally, the referee failed to penalize Whyte for the numerous fouls that he made in the fight. Whyte was roughing up Parker badly throughout the fight, but he wasn’t penalized for any of them by Lewis. To say that Lewis was having a bad day at the office is putting it lightly. Lewis was there in body only on the night, and failed to make the right calls when needed.

If Lewis had simply made the right call on the head-butt knockdown in round 2, and taken three points off from Whyte for his excessive fouling, Parker would have easily won the fight. The fight was controlled in such a horrible manner by Lewis that the contest begs for a rematch in my view. Unfortunately for Parker, Whyte’s promoter Eddie Hearn has said nothing about wanting to put a rematch together. Hearn is looking to move Whyte forward to keep him in line for a big money rematch against heavyweight champion Anthony Joshua next year on April 13 at Wembley Stadium.

“In terms of us appealing, I don’t think we will. I think we’ve grounds to appeal, the WBO rules etc., but we’re going to take the high ground,” Parker’s promoter David Higgins said to skysports.com.

It would be in Whyte’s best interest to face Parker a second time, as he doesn’t have any interesting opponents that are currently available to him. Whyte has already turned down a rematch with Dereck Chisora, who is coming off of an impressive stoppage win over Carlos Takam. Hearn made a $7 million to $8 million offer for WBC heavyweight champion Deontay Wilder to face Whyte. However, it doesn’t look like Wilder is going to accept that offer because he’s expected to face former heavyweight unified champion Tyson Fury in December. Whyte wants to fight Anthony Joshua, but he’s already scheduled to face Alexander Povetkin on September 22. Whyte wants the Joshua fight, but he’s going to have to wait until April 13 for that fight. Hearn seems more than eager to match Joshua and Whyte together.

Whyte needs a good fight to keep him sharp before his rematch with Joshua on April 13. Hearn says he wants Deontay Wilder to fight Joshua on that date, but his $15 million flat fee offer made to the 6’7” champion suggests that there’s no serious interest in making the fight. Hearn isn’t even willing to give Wilder a percentage deal. That tells you all you need to know about Hearn’s interest in making the Joshua vs. Wilder fight. It would be best for Whyte to clear up the controversy over his poorly officiated fight with Parker by facing him in a rematch to show that he’s the better fighter.

Parker has had bad luck in losing his last two fights to Anthony Joshua and Whyte in the UK. What’s interesting is both fights had referees making questionable decisions inside the ring that baffled boxing fans. In Parker’s fight against Joshua last March, the referee broke the two fighters when they would attempt to work on the inside. As such, the fight ended up being conducted on the outside with the shorter 6’3” Parker being at a huge disadvantage to the taller 6’6” Joshua.

“If we were offered to get a rematch with Dillian Whyte, we’d take it. Whether Dillian is ready or willing to take a rematch, I don’t know, but I think even he will be aware that a concussed Parker nearly came back and got him at the end. He would probably see it as quite a high-risk fight.

Breazeale rags about Deontay Wilder not wanting to fight him »