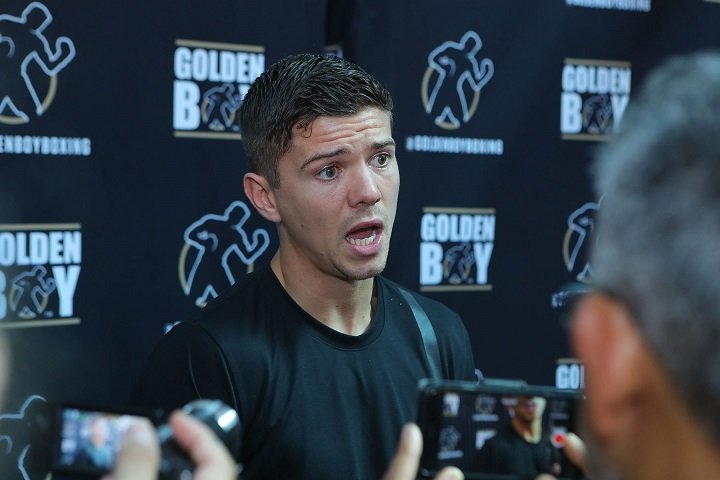 Campbell will be looking to avenge his loss to Mendy. Sadly, Campbell seems to be unable to give Mendy credit for his fine victory over him three years ago. Instead of giving the talented Mendy credit, he says he shouldn’t have been fighting him on the night. In other words, Campbell is making excuses for his loss. He feels he’s improved since then. I’m not sure that fans agree with Campbell though, as he looked worse than awful in losing a 12 round split decision to Jorge Linares in 2017, and then complaining afterward that he should have won.

The winner of the Campbell vs. Mendy fight will be the mandatory challenger to WBC lightweight champion Mikey Garcia. It’s quite possible that Mikey may choose to give up his WBC title if he moves up to welterweight to face IBF champion Errol Spence Jr. It depends on what kind of success Mikey has against Spence. If he beats him or gives him a lot of problems in losing, Mikey may choose to stick it out at welterweight.

“I want to clear Mendy off my record,” said Campbell to skysports.com. “For reasons that I’ve talked about previously I should have never got in to the ring that night, but what’s done is done, and I can’t wait to right that wrong on my record on fight night.”

It seemed to me that Campbell was simply outclassed by the better fighter Mendy on the night. I don’t know why Campbell can’t take the high road and admit that he was beaten by the better talent, but oh well. I guess that’s how it is. The good thing about Campbell fighting Mendy in front of a large crowd at Wembly Stadium on the Joshua-Povetkin undercard is that the fans will be able to see for themselves who the better fighter is. If Campbell gets beaten soundly like he did last time he fought Mendy, then the boxing public will see it happen live. As such, if Campbell starts with the excuses or if he starts talking about having been robbed, then the fans will be able to judge for themselves if it’s a case of sour grapes by the 2012 Olympic gold medalist. It would probably be better off for Campbell to follow former WBO heavyweight champion Joseph Parker’s example of staying quiet after the loss. Parker arguably got a raw deal in his last two fights against Dillian Whyte and Anthony Joshua. But instead of going to the highest mountain top to complain about the referees that worked those fights, Parker chose to keep quiet and accept his losses in a dignified way.

Campbell lost to Mendy three years ago by a 12 round split decision. Campbell’s loyal boxing fans thought he deserved the victory. However, neutral fans saw Campbell losing by a clear 12 round decision. Boxing News 24 had Mendy winning nine rounds to three. Campbell was knocked down in the 5th round after getting caught with a big left hook to the head. Campbell was lucky not to have been knocked out in that round, as he was getting belted around the ring by the hard hitting Mendy. At the time, Mendy’s victory over Campbell was viewed as a huge upset. Campbell had been a gold medal winner in the 2012 London Olympics, although several of his victories were viewed as highly controversial. Many boxing fans felt that Campbell deserved to lose to John Joe Nevin of Ireland, Detelin Dalakliev (Bulgaria) and Vittorio Parrinello (Italy). Campbell emerged from the 2012 Olympics being seen differently through the eyes of the fans. While some felt he was invincible, others saw a fighter that arguably should have lost three times in the 2012 London Olympic competition. For the fans that felt that Campbell was invincible, they were shocked at seeing him lose to Mendy. For me, I saw it as par for the course. He didn’t win the 2012 Olympics in my mind, so I wasn’t surprised in the least to see him get beaten by Mendy. Campbell hasn’t been involved in any controversial decisions like we saw in the 2012 London Olympics. Campbell did bellyache about losing to former WBA World lightweight champion Jorge Linares by a 12 round split decision last September in Inglewood, California. Campbell thought he deserved the victory. Eddie Hearn, the promoter for Campbell, also thought he deserved the win, but the boxing fans weren’t in agreement with them and they were pretty much ignored. Linares appeared to win eight of the twelve rounds. Campbell was totally outclassed in the first four and last four rounds by Linares, who made it look easy when he was trying.

The 5’9” Campbell is a fighter that wins with is size and reach advantage over his smaller opponents. 5’6” is considered the average height for the lightweight division. When you put a tall 5’9” southpaw in the division like Campbell, it gives him an advantage.

At 33, Mendy is still looking every bit as good as he was in 2015 when he battered Campbel. Mendy has a nice 10-fight winning streak going. Mendy hasn’t lost a fight since getting beaten by Edis Tatli by a 12 round unanimous decision in April 2015.

“I am now a completely different person and a different fighter all-round,” Campbell said. ”I’m 10 times better than I was when he beat me three-and-a-half years ago. I’m bigger, I’m wiser, my boxing ability is 10 times what it was back then,” Campbell added.

I’m not so sure that Campbell is a better fighter than he was three years ago against Mendy. I mean Campbell didn’t look very good in losing to Linares two fights ago, did he? Since that fight, Campbell has fought just once in beating a journeyman named Troy James. I’m not sure why Campbell’s promoter Eddie Hearn matched him against a journeyman at this stage in his career. To be sure, it was an odd move, because when you’re an Olympic gold medalist and you’ve been fighting as a pro for five years, you’re not supposed to be fighting journeyman level opposition after you were beaten by a talented world champion. Campbell’s wins since his loss to Mendy have been largely over beatable opposition. Campbell was knocked down hard in the 2nd round by an arguably over-the-hill Argenis Mendez in July 2016. For some reason, Mendez stopped throwing punches after knocking Campbell down. It was very, very odd. Instead of looking to finish Campbell off, Mendez stopped throwing punches altogether and spent the remainder of the fight just covering up. It’s lucky for Campbell that Mendez didn’t keep hitting him with shots because we might have seen an early knockout in that fight, because each time he would land, he was hurting him.

Campbell’s wins since his loss to Mendez have come against this group of fighters:

Most of those guys are journeyman level fighters and not top contenders. Campbell has been winning for the most part since his loss to Mendy, but he’s not been beating the cream of the crop at 135. That’s plain to see by the boxing world. When Campbell did finally step it up against Linares, he was beaten. I don’t know if I agree with Campbell’s opinion about himself having improved by 10 times. I don’t see any improvement. I do see a little bit of age creeping in for the now 30-year-old Campbell, but that’s about it.