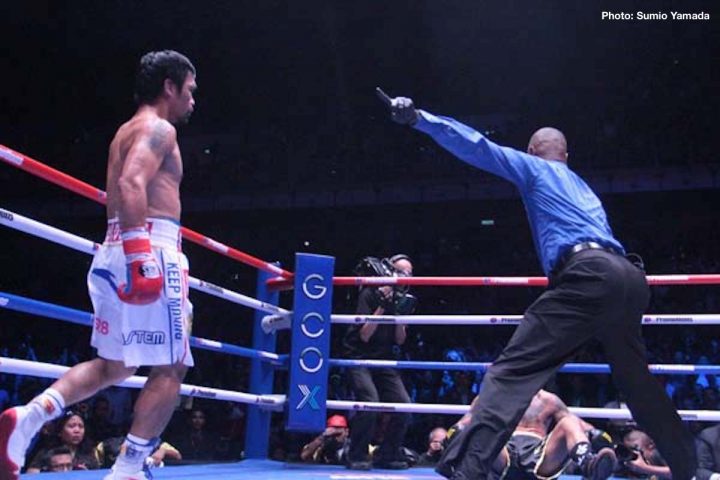 By Chris Williams: Jeff Horn’s chances of getting a rematch with Manny Pacquiao seem unlikely at this juncture, as the newly crowned World Boxing Association ‘regular’ welterweight champion says he wants Floyd Mayweather Jr. next.

Horn, 30, was hoping that Pacquiao (60-7-2, 39 KOs) would want to defend his WBA title against him to avenge his loss from last year in Brisbane, Australia. However, Pacquiao seems to have no interest in giving Horn a rematch to avenge the loss. One reason for that you can argue is the lack of money that Pacquiao would make fighting Horn a second time.

After a year out of the ring, Pacquiao, 39, put in an outstanding performance last Saturday night in defeating WBA secondary welterweight champion Lucas Matthysse by a 7th round knockout at the Axiata Arena in Kuala Lumpur, Malaysia. Pacquiao looked like he had stepped out of a time machine in battering Matthysse in dropping him three times in the contest before it was halted in the 7th round by referee Kenny Bayless. Pacquiao looked muscular and put in the kind of performance that boxing fans hadn’t seen since 2009. The transformation in Pacquiao’s physique and his punching power from his last 13 fights was impressive. Pacquiao fought like he was same fighter that had taken Miguel Cotto apart in 12 rounds in 2009. Pacquiao fought like a fighter in his 20s rather than one that is about to turn 40 in December. All in all, it was a superb performance by Pacquiao in coming back from a year of inactivity to defeat one of the hardest punchers in the welterweight division in Matthysse.

“Manny is the guy who would produce the lion’s share of the pay-per-view, so it’s really his call,” said Top Rank promoter Bob Arum to espn.com. “Whichever fight he chooses to do will be extraordinary.”

Arum promotes Jeff Horn, Vasyl Lomachenko and Terence Crawford. It’s no secret that Arum would love to have Pacquiao fight one of them. However, it’s unlikely that he’ll get his wish unless he throws a lot of money at Pacquiao in offering him a King’s ransom to get him to face one of those guys. Pacquiao isn’t interested in going back to Australia to fight Horn there after losing a controversial decision in Brisbane last year in July. A rematch between Pacquiao and Horn would only draw a large audience if it took place in Australia. Since Pacquiao isn’t about to go back to Australia, it’s pointless for him to face Horn again, especially after the way he was knocked out by Crawford in his last fight in June.

Horn will likely face 43-year-old Anthony Mundine next rather than Pacquiao. Horn vs. Mundine would be a big affair in Australia, but obviously nowhere else. The fight will give Horn a good payday, but do very little to help him rebuild his career worldwide following his one-sided loss to Crawford. For Horn to redeem himself, he needs to fight younger fighters that are relevant in the welterweight division. Mundine is long in the tooth and he fights in the 154 lb. weight class. He’s clearly not a relevant fighter in the junior middleweight division. If Horn wants to rebuild his career, he needs to fight the top welterweights. If he wants to fight junior middleweights, then a fight against the likes of Erickson Lubin, Erislandy Lara, Maciej Sulecki, Austin Trout or Tony Harrison is the guys that he should be targeting. It’s unlikely that Top Rank promoter Bob Arum would be in favor of matching Horn against any of those guys because the chances of him losing would be too high. Mundine is a payday fight for Horn, but not one that will help his career. Horn beating Mundine isn’t going to make the U.S boxing fans believe that he’s capable of defeating champions like Errol Spence Jr. For Horn to get back into a world title fight at 147, he needs to face top fighters at 147, not older guys that have seen better days like Mundine.

Pacquiao wants to lure Floyd Mayweather Jr. out of retirement to face him, but unfortunately his win over the 35-year-old Matthysse probably wasn’t nearly a significant enough victory to get the ‘Money Man’ to return to the ring. The U.S boxing public likely wasn’t impressed enough with Pacquiao’s win over the shot-looking Matthysse to suddenly get back on the Filipino star’s bandwagon once again. On social media, boxing fans were remarking how over-the-hill Matthysse looked than they were in complimenting Pacquiao’s performance against him.

“Mayweather? If he decides to go back to boxing then that is the time we are going to call the shots,” said Pacquiao after his win over Matthysse last Saturday night. “I have the belt, so it’s up to him. If he wants to come back in boxing let’s do a second one.”

It would be a minor miracle if the 41-year-old Mayweather (50-0, 27 KOs) was to come back and give Pacquiao a rematch. Mayweather hasn’t fought in 11 months since stopping MMA fighter Conor McGregor in the 10th round last year in August 2017. That was an embarrassingly bad mismatch that the Nevada State Athletic Commission sanctioned as a professional fight despite the fact that McGregor had never fought before inside a boxing ring. Mayweather made a bundle of money from the fight, and there’s no real need for him to return to the ring to fight anyone else. Pacquiao and Mayweather brought in 4.3 million buys in the richest fight in boxing history in September 2015. The fight was boring with Mayweather standing on the outside picking Pacquiao off with jabs and pot shots. The fans were unhappy with Mayweather’s safety first fighting style, and they were equally unhappy with the way Pacquiao fought. He looked timid for the entire 12 round fight. Mayweather’s last fight against McGregor was like watching a sparring match instead of a professional boxing fight. A lot of fans were angry at having paid $100 per household to watch another boring fight from Mayweather. At this point it’s unlikely that a Mayweather vs. Pacquiao rematch would sell in the U.S. It might do well if it were staged in another country, but in the U.S, the fans are still unhappy with the previous fight between them an unwilling to order the fight on PPV. It would be a decent fight on free cable, but it would be wretched to see on PPV. Mayweather is shot at this point, and Pacquiao isn’t the fighter he once. He looked good against Matthysse, but that was only because he wasn’t fighting an elite welterweight.

“Yes, that’s a potential opponent; Amir Khan,” Pacquiao said in talking about options for his next fight. ”There’s a lot of potential opponents there, like Lomachenko, there are so many fighters that have potential to be my opponent next.”

Amir Khan might be the best option for Pacquiao, because he’s interested in fighting him and he’s not going to require that he drop weight the way that Lomachenko is. For Pacquiao to face Lomachenko, he’ll need to drop down in weight two weight divisions to face him at 135, according to his manager Egis Klimas. I think it’s safe to say that Pacquiao isn’t going to be willing to go down to 135 to take the fight with Lomachenko. It’s not that Pacquiao can’t make weight for the lightweight division. It’s likely more of a case of Pacquiao not willing to give Lomachenko everything he asks for in the negotiations. Since Mayweather isn’t going to come out of retirement to face Pacquiao, Khan is easily the best option for him to fight in November or December. Khan vs. Pacquiao would do well if it were staged in the UK. The fight won’t interest boxing fans in the U.S obviously, as Khan has lost too many times over there for fans to be excited at seeing him as an opponent for Pacquiao.

Liam Smith says Jaime Munguia will be there to be hit on Sat. »