Liam Smith says Jaime Munguia will be there to be hit on Sat. 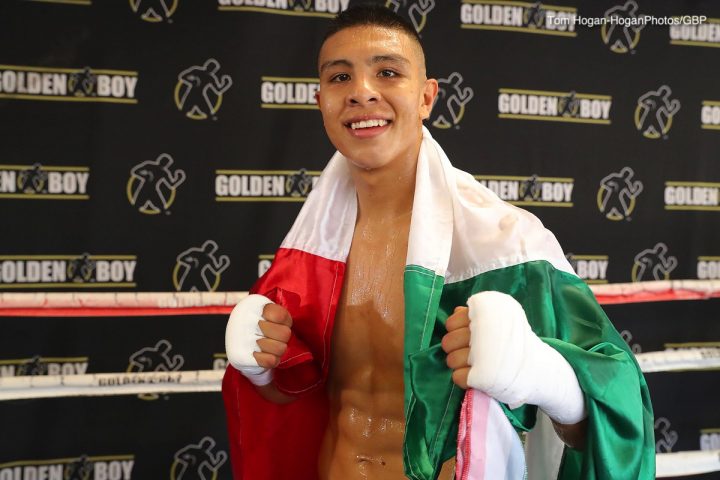 By Dan Ambrose: Former 154 pound champion Liam ‘Beefy’ Smith (26-1-1, 14 KOs) believes that World Boxing Organization junior middleweight champion Jaime Munguia (29-0, 25 KOs) will be there to be hit by him this Saturday night in their fight at the Hard Rock Hotel in Las Vegas, Nevada.

Smith, 29, wasn’t impressed with Munguia’s recent 4th round knockout win over Sadam Ali from last May. Smith feels that former welterweight Sadam was fat on the night at junior middleweight on May 12 in Verona, New York. Smith says he prefers Munguia’s style of fighting over Ali, who tends to move a lot in his fights. Smith had the chance to challenge Sadam for his World Boxing Organization 154lb title, but he pulled out of the fight last May after suffering an allergic reaction. Munguia stepped in and wiped out Sadam in four rounds to capture the WBO junior middleweight title.

“Ali looked small and fat at the weigh-in. I couldn’t believe it,” Smith said to RingTV.com. ”He looked terrible to be honest with you. (Team Munguia) will know how strong and tough I am.

Smith wasn’t all that surprised that Munguia, 21, was able to demolish Sadam, and he’s not giving him any credit for having done so. A lot of boxing fans agree with Smith, as they feel that Munguia is still a question mark at this early stage of his career. With the middleweight-sized Munguia’s size advantage over Sadam, he was always going to knock him out. It’ll be a much bigger accomplishment for Munguia if he’s able to do the same thing to the 5’9” Smith, who doesn’t look fat after he rehydrates to the low 170s for his fights. Smith is big enough to fight at middleweight if he wanted to. Gennady Golovkin rehydrates to the same amount of weight that Smith does, but he chooses to fight at middleweight instead of boiling down to 154 to compete against lighter fighters.

”Munguia’s camp might say I suit him stylistically, but I can say this to you right now: If you offer me Ali’s style or Munguia’s style, then I’ll pick Munguia 10 times out of 10,” Smith said. ”I don’t want to be chasing Ali around, whereas Munguia is always going to be there for me to open up on.”

Munguia has the fighting style that Smith has done well against throughout his 10-year pro career. The only time Smith has failed to emerge victorious against an aggressive fighter was against Saul Canelo Alvarez, who stopped him in the 9th round in 2016. Smith beats the B-level fighters at junior middleweight. He was out of his element when he fought Canelo. There was too much of a difference in hand speed between Smith and Canelo for him to win that fight. The good news for Smith is he doesn’t have to worry about Munguia having blazing hand speed.

Mungiuia isn’t that fast of hand or feet. He’s going to be there for Smith to hit on Saturday night. The bad news for Smith is Munguia punches with major power, and it’s not going to be the same thing for him as it was throughout his career in facing lighter punchers like John Thompson. Smith has fought some hard punchers in Canelo and Liam Williams. Smith’s lack of foot speed is going to make it troublesome for him to get away from Munguia if he starts taking withering fire from the Mexican KO artist. Like we saw with Sadam Ali, things could quickly get out of hand for Smith early on when Munguia starts connecting with his power shots. Unlike Sadam, Smith won’t have the mobility to get away from Munguia if he starts getting taken apart. The fight could quickly turn into a last stand type situation for Smith if he’s not able to keep him off. Smith doesn’t plan on running from Munguia, but that might be bad for him.

Smith has problems making weight for the 154lb weight class. If he’s weight drained for the fight, then his chances of beating Munguia are going to go way down. If Smith isn’t 100 percent, he’s going to be at the mercy of Munguia. The only thing Smith can count on in that case is for Munguia to exhaust himself from hitting him. That’s obviously a tough way for Smith to win, but he’s done that in the past in his fights against Liam Williams and John Thompson. It’s going to be harder for Smith to pull that move off against Munguia, because he’s a bigger puncher than those two guys and he doesn’t get tired. If Smith covers up and waits for Munguia to fade from punching him, he might be sorry for it later. Munguia won’t tire. Munguia is capable of overwhelming Smith with his high volume punching attack. Smith’s bes chance of winning this fight is for him to land his shots and hope that he can hurt Munguia, who will be facing his hardest puncher of his career.

Smith is a bigger target for Munguia than Ali was, and his stationary style of fighting could suit him well. Munguia hasn’t fought anyone that was good enough to learn anything about whether he’s for real or not. Smith is the first real threat to Munguia. This could be an enlightening experience for Munguia or a real disaster.

It was surprising that Munguia’s management was ready to match him against middleweight champion Gennady Golovkin earlier this year on May 5 after Canelo pulled out of the fight. They weren’t holding him back. It’s a good thing that the Nevada State Athletic Commission didn’t let the GGG-Munguia fight take place, as it would have likely ended badly for Munguia. the 5’9” Smith is a little shorter than the 5’11” Munguia, but they both weigh in the low 170s after they rehydrate. The main difference between the two is Smith is older, more experienced and not as big of a puncher.

If Munguia wins this fight, then he needs to hold off on fighting the better junior middleweights like Erislandy Lara, Jarrett Hurd and Jermell Charlo. Munguia needs more experience before he steps it up against those fighters. Smith is going to be a test of whether Munguia has the kind of talent to beat the gatekeeper level contenders. Although is a former world champion at junior middleweight, he’s not really considered a championship level fighter. The only reason Smith held a world title at 154 is because he fought a limited fighter in John Thompson for the vacant junior middleweight title in 2015 rather than one of the better contenders like Demetrius Andrade. Smith likely would have lost had he fought

Andrade. Kell Brook would be the perfect opponent for Munguia to fight if he can get past Smith. However, Brook is being kept in the slow lane by his promoter Eddie Hearn until he faces Amir Khan later this year or in early 2019. Once Brook faces Khan, Hearn will be ready to let him fight Munguia. That’ll be an interesting fight for Munguia to show that he can deal with an experienced veteran.

Munguia says he would like to fight Canelo or Golovkin if he beats Smith, but he says he’s not calling them out. If Golden Boy Promotions gets their wish in signing Munguia to a long term co-promotional deal, they’ll likely keep him apart from Canelo. Golden Boy CEO Oscar De La Hoya isn’t going to put Munguia in with Canelo anytime soon if he’s promoting him. De La Hoya is going to want to milk the Canelo vs. Munguia fight. If Munguia shows promise to become a star, De La Hoya will wait as long as possible before he puts him in with Canelo, because there’s no point in him ruining one of his revenue streams by matching the two fighters against each other.