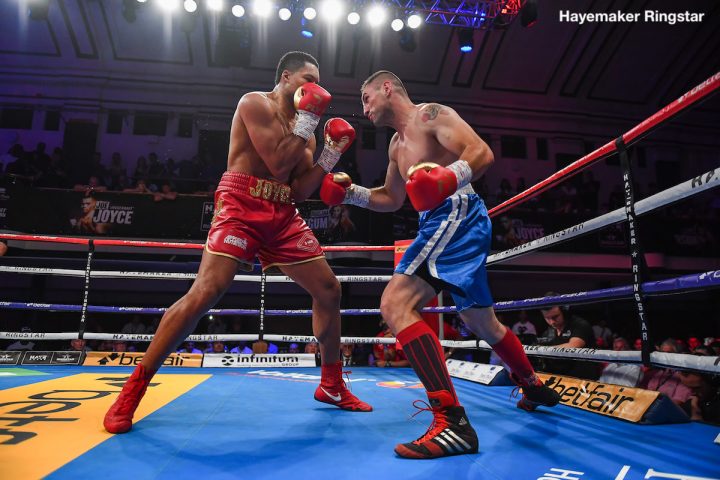 By Scott Gilfoid: Heavyweight prospect Joe ‘Juggernaut’ Joyce (5-0, 5 KOs) has reportedly split with his trainer Ismael Salas, and he won’t be fighting on the Dillian Whyte vs. Joseph Parker undercard on July 28 on Sky Box Office pay-per-view at the O2 Arena in London, England.

Whyte’s promoter Eddie Hearn wanted the 2016 Olympic super heavyweight Silver medalist Joyce to face Nick Webb (12-0, 10 KOs) in the co-feature bout on the Whyte-Parker card after former IBF welterweight champion Kell Brook suffered an injury and pulled out of his scheduled fight against Brandon Cook on the card. Hearn hoped that Joyce could face Webb as the chief support for the Whyte vs. Parker fight, even though former heavyweight world title challenger Dereck Chisora is facing the recently beaten former world title challenger Carlos Takam on the card.

Hearn liked the idea of matching Joyce against Webb. Joyce is still interested in facing Webb, but not until September. That’s obviously not the news that Hearn wanted to hear, as now he’ll need to come up with a good fight to stage in the slot vacated by Brook.

Joyce, 32, wants to find a trainer to replace Salas before he fights again. It’s unclear on whether Joyce wants a well-known trainer or not. It would obviously help if Joyce hired a trainer that has experience working with big guys.

Fighting Webb wouldn’t have done much for Joyce’s profile. If Joyce is going to fight domestic level heavyweights, he needs to face better guys than his. That’s not a knock on Webb, but the 30-year-old is horribly flawed and a knockout waiting to happen. It would be better for Joyce to start fighting actual contenders like Bermane Stiverne, Agit Kabayel, Bryant Jennings, Charles Martin, Chrisian Hammer, Alexander Ustinov and Tony Bellew. It’s all well and good that Hearn wants Joyce to fight his guy Webb, but that’s such a waste of time for him. Joyce is 32-years-old, and he’s supposed to be on the express route to a world title shot.

Fighting Webb is more of a fight that a novice fighter with no Olympic experience would be taking rather than a fighter with the amateur background that Joyce has going for him. Joyce needs to be stepped up quickly the way that two-time Olympic gold medalist Vasyl Lomachenko. Joyce needs to step it up already and forget about the domestic level fighters like Webb. You’d hate to see Joyce still spinning his wheels fighting domestic level scrubs a 40-years-old. Unless the money Hearn is offering Joyce to face Webb is life-changing, he should tell him to get lost and focus instead on fighting contenders in the heavyweight division.