Pacquiao must fight Lomachenko at 135 or not at all 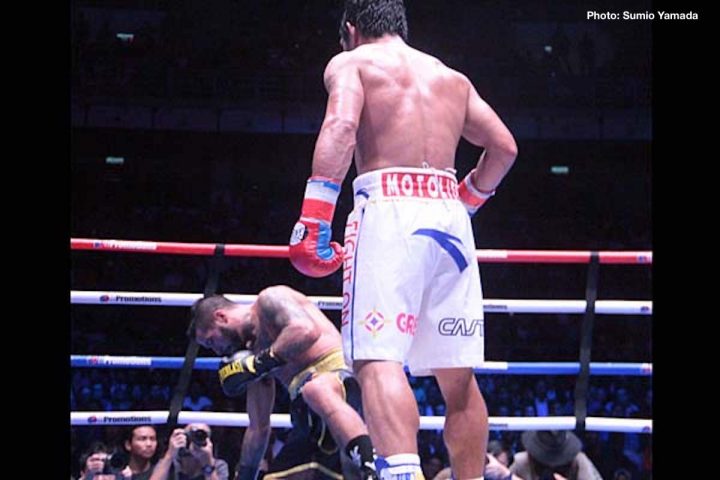 By Chris Williams: Manny Pacquiao will need to sacrifice weight if he wants a fight against the Top Rank promoted Vasyl Lomachenko in November or September. Lomachenko’s manager Egis Klimis wants Pacquiao to come down in weight two weight divisions to face him at 135 lbs., which is the division that he holds the WBA lightweight title.

The stance by Lomachenko will likely result in him not getting the fight against Pacquiao, but oh well, it’s his decision. Lomachenko won’t agree to fight Pacquiao at a catch-weight. If the fight is going to happen, it will be under Lomachenko’s conditions.

It’s crazy to imagine Pacquiao agreeing to Lomachenko’s management’s request for him to come down all the way to 135 in order for the fight to happen. Even though it’s likely an easy thing for Pacquiao to make 135, it’s doubtful that he’ll agree to do it to face Lomachenko out of principal. Pacquiao is the more popular fighter of the two by far, and he’s accomplished more during his pro career. Lomachenko has captured world titles in three weight classes, but he’s probably not going to one day win world titles in nine divisions. For Lomachenko to outdo Pacquiao in winning division titles, he would need to move all the way up to super middleweight.

“We have no interest (in moving up in weight),” Klimas said to Chris Mannix of Yahoo Sports News. “If Pacquiao can make 135, to come in and compete for (Lomachenko’s) WBA title, Vasyl is the champion in that weight class, it’s a possibility. There will be no catch-weight. If he wants to challenge, he needs to come down. If Manny Pacquiao wants to fight Lomachenko, he can make 135.”

Klimas asking Pacquiao to move down two weight classes to fight Lomachenko is a shocking decision on his part, as it’s a fight that would greatly increase the 2-time Olympic gold medalist’s popularity if he were to win it. It would be understandable on Lomachenko’s part to reject the idea of moving up in weight to fight someone at 140 if it were a non-popular fighter. But for Lomachenko not to move up in weight to fight a still popular fighter like Pacquiao, it’s a self-defeating move on his part. Lomachenko is shooting himself in the foot by not being willing to fight Pacquiao at 140. Even if Pacquiao was offering Lomachenko a catch-weight fight at 143, he’s got to accept it if he wants to increase his popularity. There aren’t any other Pacquiao-level fighters available for Lomachenko to fight for him to increase his popularity, and he’s not going to get any of the top welterweights like Errol Spence Jr.

It’s actually not that surprising that Lomachenko isn’t interested in sacrificing weight for him to face Pacquiao. In Lomachenchenko’s biggest fight of his career against previously unbeaten super bantamweight champion Guillermo Rigondeaux last December, the Cuban star had to move up two weight classes to face Lomachenko at super featherweight without a catch-weight. There was no catch-weight offer for Rigondeaux. It was a take it or leave it situation. With the money being too good to resist, Rigondeaux moved up two weight classes to fight Lomachenko at 130. With a huge size advantage in the fight, Lomachenko easily stopped the much smaller Rigondeaux in the 6th round. But as you would expect, Lomachenko received very little credit from the casual boxing fans due to how much bigger he was than Rigondeaux. Still, it was sad that Lomachenko didn’t at least meet Rigondeaux halfway at 126.

You have to figure that if Lomachenko isn’t willing to fight Pacquiao halfway a 140 at a catch-weight, he likely will be just as resistant to the idea of facing him outside of the U.S in Malaysia or the Philippines. If Lomachenko is insisting on the match only taking place in the U.S at 135, I will make it next to impossible

to make. You can only imagine how difficult it’ll be to negotiate the purse split for the fight. If Lomachenko wants parity in the purse split with Pacquiao, it would likely be the deal breaker if the fight isn’t already sunk on the 135 lb. weight requirement. It’s unclear how much of a purse split Lomachenko would want for a fight against Pacquio. It would be hard to see Lomachenko getting more than 30 percent. The fight is probably already dead in the water based on Klimas saying that Pacquiao would need to come down to 135 to make it happen.

The last time Pacquiao fought at lightweight was in 2008 when he defeated World Boxing Council 135 lb. champion David Diaz by a 9th round knockout. The then 29-year-old Pacquiao moved up to welterweight after that fight and defeated Oscar De La Hoya. Pacquiao hasn’t looked back since then for any fights at lightweight. One reason for that is the boxing public hasn’t historically been all that interested in fights at lightweight. The U.S boxing fans prefer to watch fighters from 147 to heavyweight. The lightweight division has largely been ignored. Lomachenko is somewhat popular in the States among hardcore fans, but he’s not a PPV guy. He’s an ESPN fighter, and it’s hard to imagine. Pacquiao has fought as high as 154 since moving up in weight years ago. It would be a major move for him to go back down to lightweight at this point in his career.

The question now is does Pacquiao desire a fight against Lomachenko enough for him to melt down to 135 to fight him? I doubt that he does. Pacquiao can make arguably better money facing Amir Khan, Terence Crawford, Errol Spence Jr., Danny Garcia or Shawn Porter. Pacquiao called out Floyd Mayweather Jr. for a rematch. That’s an unlikely fight but if Mayweather does take Pacquiao up on his offer, it would be a far better fight without question.

Lomachenko at 140 would be at a disadvantage against Pacquiao. Lomachenko looked slower at 135 in his last fight after moving up from super featherweight to challenge WBA lightweight champion Jorge Linares last May. If Lomachenko puts on even more weight to move up to 140, he’ll be an easy to hit target for Pacquiao.

This won’t be a fair fight if Pacquiao is as muscular as he looked last Saturday night in his contest against WBA ‘regular’ welterweight champion Lucas Matthysse. Pacquiao looked incredibly muscular and powerful for that fight. Lomachenko will be over-matched if Pacquiao is looking like that against him.