Jaime Munguia defends against Liam Smith on Sat. on HBO 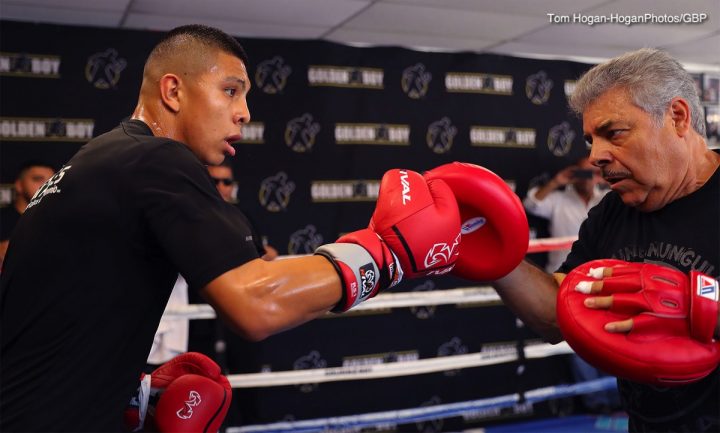 By Jeff Aranow: Knockout artist Jaime Munguia (29-0, 25 KOs) will be making his first defense of WBO junior middleweight title this Saturday night against former WBO 154lb belt holder Liam “Beefy” Smith (26-1-1, 14 KOs) on HBO World Championship Boxing at the Hard Rock Hotel in Las Vegas, Nevada. This will be the coming out party for the 21-year-old Munguia.

This is his big opportunity to win over a huge amount of fans on Saturday if he can KO the durable 29-year-old Smith. Munguia opened a lot of eyes in his last fight in making easy work of Sadam ‘World Kid’ Ali in stopping him in the 4th round on May 12. Ali is a good fighter, but Munguia had too much punching power for him.

Munguia came out of nowhere last May to stop Sadam Ali in four quick rounds as a replacement opponent after Liam Smith was forced to pull out of the fight because of an allergic skin reaction. Ali had no idea what he was facing when he stepped inside the ring to face the 5’11” Munguia. Before that fight, Munguia had impressed boxing fans with his 2nd round knockout victory over Paul Valenzuela Jr. last December on the Orlando Salido vs. Mickey Roman. That fight wasn’t televised, but Munguia’s performance got the attention of a lot of people in the boxing industry. Munguia looked like a wrecking machine with the way the obliterated Valenzuela Jr.

The way that Munguia was punching in that fight showed what a force he can be in the junior middleweight division. When Saul Canelo Alvarez pulled out of his May 5th rematch with Gennady Golovkin, there was immediate interest from GGG’s promoter Tom Loeffler to have Munguia as the replacement opponent for him to fight on that date. The Nevada Commission said no to that fight. Munguia was then offered a fight against Sadam Ali, and he readily agreed to it. The rest is history. Munguia is now on potentially on his way to stardom if he can take care of business on Saturday against Smith and then move on from there to defend against Kell Brook.

“I think that the only advantage that Liam Smith has is that he’s fought in big events before. But I have many fights under my belt. I have a lot of experience,” Munguia said to Fightnews.com.

Although Smith has more experience in the pro game than Munguia, he’s not as big or as powerful as him. Munguia has the size and more importantly the punching power to get Smith out of there just as fast on Saturday as he did in stopping Sadam Ali last May. Despite having a KO percentage of only 50, Smith fancies himself as a puncher. That could play into Munguia’s hands well if he’s able to slug with Smith. There aren’t too many fighters in the junior middleweight division that can stand up to the punching power. It’s going to take someone special to handle the power that Munguia possesses.

Smith has a pretty good chin, and his defense is usually solid. He’s great at covering up behind his high guard to block shots for long periods during fights. Smith was able to beat Liam Williams and John Thompson by waiting them out by covering up for the first six rounds of those fights. Smith then came on in the second half to defeat them. Smith wasn’t able to that against Saul Canelo Alvarez, who stopped him in the 9th round on September 17, 2016 in the United States. That loss is the only one on Smith’s record. It took a special fighter in Canelo to beat him. However, that’s also the only high quality opponent that Smith has faced during his career. Smith beats the lesser fighters. That’s why it’s going to be interesting to see how Munguia does against him.

Munguia needs to prove that he belongs in the same class as Canelo by defeating Smith. That’s what makes this fight so intriguing. Munguia and his trainer Robert Alcazar want to defeat Smith faster than Canelo did two years ago. Canelo was 25 at the time he fought Smith. If the 21-year-old Munguia can knock Smith out faster and more impressively than Canelo did, it would be a major statement for him. Smith recently twice defeated the hard-hitting Liam Williams. Before that, Smith beat Marian Cazacu. Williams is a big puncher too, but not in the same class as Munguia. Smith did well in holding up under the fire power of Williams. Munguia is going to need to really take the fight to Smith if he wants to get him out of there, because he’s now battle hardened due to his recent fights against Williams.

Soon, Munguia would like to face WBC junior middleweight champion Jermell Charlo and/or IBF/WBA champ Jarrett Hurd in unification fights. Munguia prefers to face Hurd, who is a natural slugger that comes right at his opponents. Charlo is more of a mover, especially when he faces opposition with a lot of punching power. Munguia would need to chase Charlo down for him to have a chance of knocking him out.

“I would love to have a unify my titles in my weight class with Charlo or Hurd but I prefer Hurd,” Munguia said. “Everyone is going to talk about me after this fight. This will open up more opportunities. After this fight everyone will compare me to Canelo and Golvokin. “

Boxing fans probably won’t compare Munguia with GGG if he destroys Smith, since he hasn’t fought him before. The fighter that the fans will compare Munguia to is Canelo if he can stop Smith faster than him. Canelo fights nothing like Munguia though. The two of them are entirely different with the way win their fights. Munguia is more of a seek and destroy puncher than Canelo. Munguia doesn’t stay on the ropes the way Canelo does, and he doesn’t require constant rest breaks the way he does. Golden Boy Promotions CEO Oscar De La Hoya is hoping to promote Munguia. Having Munguia as part of his Golden Boy stable would give De La Hoya another an exciting fighter that can attract boxing fans.