Pacquiao is 2:1 favorite to defeat Matthysse 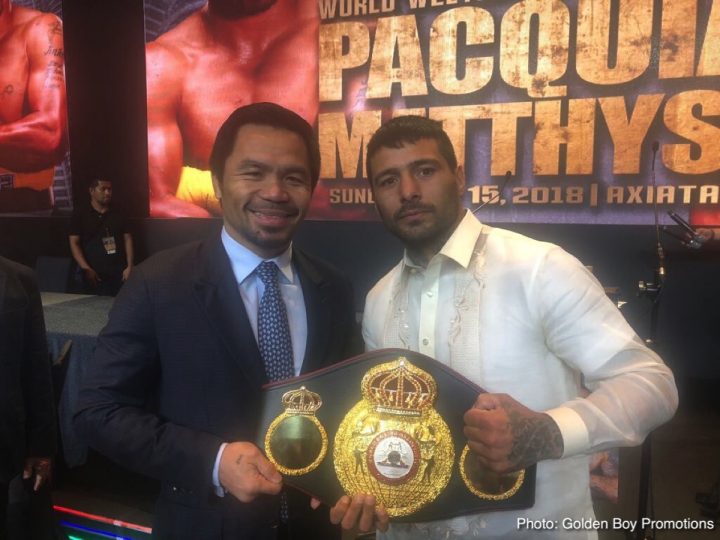 By Chris Williams: The odds-makers have installed 39-year-old former eight division world champion Manny Pacquiao a 2:1 favorite to unseat WBA World welterweight champion Lucas Matthysse on Jul 15 at the Axiata Arena in Kuala Lumpur, Malaysia. The fight will be televised on either ESPN or ESPN+ in the United States on July 14.

It’s very difficult to picture Pacquiao as the favorite in this fight after how badly he performed last year in his 12 round unanimous decision loss to Jeff Horn in July 2017 in Brisbane, Australia. Horn used his size and aggression to wear Pacquiao down and get the decision. It helped the younger, stronger and larger 5’9” Horn that he was able to use his size to rough up Pacquiao (59-7-2, 38 KOs) for 12 rounds without being penalized by the referee working the fight.

Matthysse, 5’6 ½”, doesn’t have the same size to be able to rough Pacquiao up in the same way that Horn did. I’m sure that Matthysse (39-4, 36 KOs) and his trainers have thought about using the same tactic that Horn employed against Pacquiao, but it’s unlikely that it would work because he’s too small to use that that strategy and it’s the wrong venue. The fight is taking place in Malaysia, and it’s improbable that the referee will put up with too much extracurricular stuff from Matthysse without stepping in and penalizing him if he gets a little too rough in there with the aging Pacquiao.

”ESPN is up to speed on everything,” Arum said to ESPN.com about the Pacquiao vs. Matthysse fight. ”When the contract is signed with Manny and his company, then ESPN will announce what it’s plans are for the fight.”

It’s not a good deal that there’s two weeks before Pacquiao-Matthysse fight that the network still hasn’t revealed whether it’ll be on ESPN or ESPN+. If this comes down to the last week of the fight, it’s going to really hurt the interest because of right now, the casual boxing fans have no clue this fight is even taking place. There is absolutely zero hype about the fight. Hardcore fans aren’t talking about it, and not surprisingly because it involves an aging 39-year-old fighter in Pacquiao, who hasn’t fought in one year and has a second job as a senator in the Philippines. To get boxing fans interested in a Pacquiao fight nowadays, it’s going to require that he be matched up with the true top fighters from this day and age. I’m sorry but the 35-year-old Matthysse isn’t one of the top guys at 147, even though he technically is the WBA secondary 147 lb. champion. Matthysse is a product of the sanctioning bodies going overboard with their world titles. Instead of the World Boxing Association having one title at 147, they for some reason have two, so you have a primary champion in Keith Thurman and a secondary strap holder in

Matthysse. It’s a bit of a joke with the boxing fans to see five champions at welterweight and two within the same sanctioning body.

With the fight now looking good for July 14, Pacquiao has a chance to gloat if he wants to, as his former promoter Bob Arum had been expressing doubts whether the Pacquiao-Matthysse fight would take place or not. All along Pacquiao was confident that it would take place, and he finally got his way. However, this might be Pacquiao’s final hoorah if he gets beaten by Matthysse because it would be his second straight defeat and it would be a lot harder for him to make excuses about the fight, especially if he gets knocked out by the Argentinean fighter. The funding is there for the Pacquiao vs. Matthysse fight, and now it’s up to the two to try and put on a good fight for the fans that tune in to see it.

“It will be the most exciting fight in Kuala Lumpur since Muhammad Ali fought Joe Bugner in 1975,” Pacquiao said via philboxing.com. “Despite our efforts, there are some individuals who wanted to sabotage the fight. I am saddened by what they’re doing. MP Promotions has already settled financial issues. Last Monday, we sent the initial payment to Golden Boy Promotions and the Matthysse Camp. The remaining amount will be released as scheduled,“ Pacquiao said.

Are there individuals that want to sabotage the fight or is this a case of people asking honest questions about the financial situation after deadlines were missed. It’s good that the fight is taking place, but I doubt seriously that people want to sabotage the fight. Arum mentioned Matthysse as a possible option for WBO welterweight champion Terence Crawford, but that was a situation where he was throwing a bone to the Argentinian fighter if things didn’t work out with Pacquiao. At least Matthysse would have had another option if the fight didn’t work out with Pacquiao. We already know that Pacquiao likely wouldn’t take a fight against Crawford if his fight against Matthysse didn’t work out, so Arum wasn’t going to offer the fight to him.

This fight is important for Pacquiao because it’s a crossroads fight for him. If he wins, he’ll move forward to a possible fight against Amir Khan. But if he loses, then it’s likely going to be all over for him. I don’t know how he can continue fighting. Things would be bleak for Pacquiao if he gets knocked out by Matthysse or dropped two or three times. That would make him look like a shot old man. As hard as Matthysse hits, Pacquiao could get knocked down two or three times in the fight.

“I feel this fight will not last the distance. May the best man win,” Pacquiao said.

Matthysse has only been stopped once in his career and that was due to an eye injury in his fight against Viktor Postol in 2015. Pacquiao hasn’t knocked out anyone out since his 12th round stoppage victory over Miguel Cotto in their catch-weight fight in 2009. That was nine years ago. I doubt that Pacquiao is suddenly going to find his punching power after nine years and all of a sudden KO Matthysse. What hurts Pacquiao is his stamina problems. He looked really tired at times in his fight against Jeff Horn last year. With Pacquiao out of the ring for an entire year, I don’t think he’s going to be in good enough condition to stop Matthysse.


« Regis Prograis to enter WBSS after he beats Juan Velasco