Regis Prograis to enter WBSS after he beats Juan Velasco 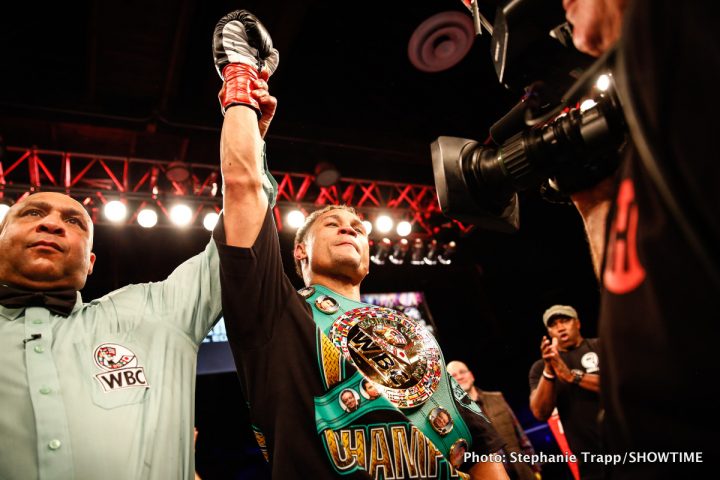 By Scott Gilfoid: WBC interim light welterweight champion Regis Prograis (21-0, 18 KOs) has a stay busy fight this month against Juan Jose Velasco (20-0, 12 KOs) that he needs to get out of the way before he enters the World Boxing Super Series 140 lb. tournament in September to battle against the other contestants for the Ali Trophy.

Although it’s now being advertised that the Prograis vs. Velasco fight will decide which of the two will enter the World Boxing Super Series tournament, there’s only going to be one winner and that Regis. That fight is an absolute mismatch. The 31-year-old Velasco hasn’t ever fought anyone remotely good during his four-year pro career in Argentina, and he struggled badly in defeating journeyman Alfredo Rudolfo Blanco (18-7, 10 KOs) by a 10 round unanimous decision two years ago in 2016. That fight showed that Velasco doesn’t belong in the top 15, so there’s no point in him being mentioned as a possibility for the WBSS tournament if he beats Prograis.

Velasco is not going to beat Prograis, period. That fight is a mismatch and it always was intended to be one. My guess is Prograis will knockout Velasco in three rounds or less on July 14. The only way that Velasco makes it into the second half of the fight is if he gets on his bike and goes into the survival mode. I don’t think Velasco will do that because he’s a knockout puncher. That’s what he’s done his entire career.

When you take a fighter that is known for knocking out most of their opponents, they don’t want to play it safe when they eventually have to take a step up from facing fodder to fighting good opposition. Velasco isn’t going to play it safe against Prograis because his mind set is that of a puncher, and he’s not going to change that against Prograis. In looking at how poor Velasco’s resume is, his real record going into the Prograis fight is 0-0. Velasco literally has not fought anyone good enough to be considered as a professional opponent during his career in my book. That’s why it’s so ridiculous that he’s talking about wanting to enter the WBSS tournament after he faces Prograis because he’s not going to win their fight. I mean, I doubt the WBSS organizers are going to want to have Velasco enter the tournament after he’s knocked out by Prograis.

This fight is a mere formality for the 29-year-old Prograis, who needs a fight to stay sharp for his quarterfinals fight in the WBSS light welterweight tournament in September. There’s talk that Prograis’ first fight in the tournament will be against World Boxing Council 140lb mandatory challenger Josh Taylor (13-0, 11 KOs). That’s a good fight. Taylor recently had major problems in beating former WBC 140lb champion Viktor Postol by a 12 round unanimous decision on June 23 in a WBC title eliminator in Glasgow, Scotland. Taylor won the fight, but it was much closer than the lopsided scores that were handed down by the set of judges that worked the fight. If anything, Taylor won the fight by two rounds.

Prograis recently stopped former IBF/WBA light welterweight champion Julius Indongo by a 2nd round knockout last March. That fight was an absolute slaughter with Prograis dropping Indongo with a jab in round 1, and then knocking him down three more times in round 2 before the fight was halted. That fight was supposed to have been competitive, but it turned out to be a huge mismatch with Prograis having no problems beating the 35-year-old former ligh welterweight champion Indongo.

“My biggest asset is my hunger to be the best. I have a chip on my shoulder and I want to prove to everybody I am the best at 140 lbs,”said Prograis. “I’m definitely excited to enter into the tournament. This is great for boxing. The best fighting the best.”

Prograis was disappointed to learn the news recently that WBC light welterweight champion Jose Ramirez won’t be entering the World Boxing Super Series 140 lb. tournament. Ramirez and the Top Rank promoted WBO light welterweight mandatory challenger Alex Saucedo aren’t going to be competing in the WBSS. Instead, the two of them are expected to face each other in a Top Rank in house fight in the near future if Saucedo is able to capture the WBO 140lb title against champion Maurice Hooker. Ramirez will have an easy time beating Saucedo. Neither of them will have much of any chance against Prograis, which is why it’s a smart move on their part in not entering the WBSS tournament.

Velasco has suddenly started thinking of himself as a potential participant in the WBSS tournament. If Velasco was facing one of the other fighters in the 140lb division like Anthony Yigit, he at least would have a slight chance of winning, but not against Prograis. That’s just bad luck on Velasco’s part, but I don’t think he would do any better against Yigit or the other World Boxing Super Series tournament contestants. Velasco would be out of his league against Josh Taylor and Kiryl Relikh. Velasco might be able to beat former IBF 140lb champion Eduard Troyanovsky.

Prograis’ toughest tests in the WBSS tournament are expected to come from Relikh and Taylor. Once those two are out of the way, Prograis will breeze to a victory in capturing the trophy. It doesn’t which of those two guys he faces in the finals. They might not even make it to the finals if the two wind up facing Prograis in the quarterfinals and semifinals. It all depends on how the WBSS tournament organizers choose to match the fighters. It would be good for the boxing fans if Prograis is kept in separate lanes than Taylor to help ensure that they meet up in the finals. I’m still not too confident that Taylor will make it to the finals even if he’s kept apart from Prograis, because he looked like something awful in his recent win over Viktor Postol. That performance showed that Taylor doesn’t have the talent to beat the best in the division. Postol is a guy that Prograis and fighters like Relikh and Sergey Lipinets would destroy if they had to face him. Taylor went life and death with Postol and barely beat him. Of course, the scores from the three judges that worked the fight were completely atrocious. They were embarrassingly bad scores, and wound up making themselves look bad in the process.

If Prograis is able to win the WBSS tournament, he’ll be in great shape to go after WBC light welterweight champion Jose Ramirez, and then the WBO title, which might be in the hands of Alex Saucedo. That would be a great deal for Prograis to face Ramirez and Saucedo. I doubt that Top Rank will let Prograis fight either of those two guys. I can’t see that happening. I hope I’m wrong, but I don’t think I will be. It would be nice if Top Rank allows Prograis to fight Ramirez and Saucedo after the WBSS tournament ends, but I’m not thinking they’ll be agreeable to that. It’s too much risk for their fighters for them to give the green light to letting them face Prograis. They should have let Saucedo and Ramirez fight in the WBSS tourney.

Pacquiao is 2:1 favorite to defeat Matthysse »