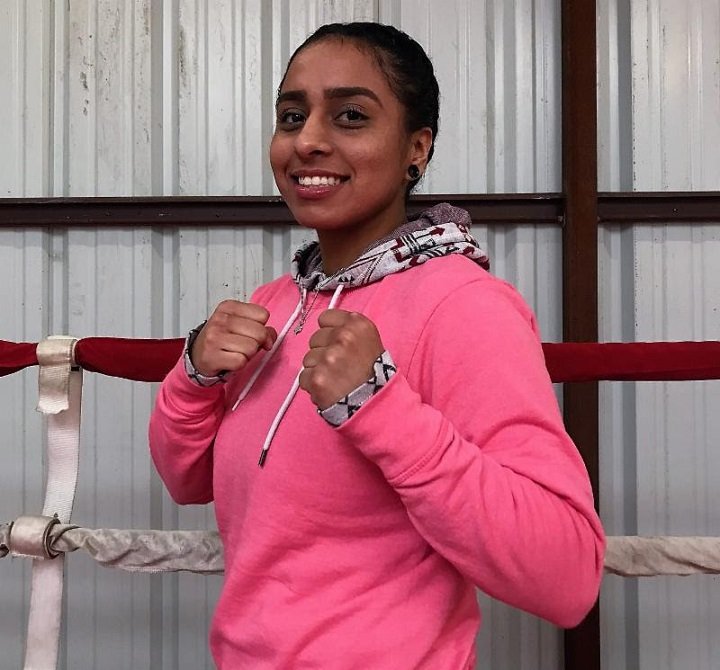 Barrios, who owns the NABF lightweight title, which she won in her 3rd professional bout, will face Aida “Lady Sparta” Satybaldinova (3-0-1) from Astana, Kazakhstan, best known as the “Female GGG”, and is the current WBF International Lightweight Champion. Both girls are undefeated and hold titles as lightweights. Barrios is also rated #18 in the world by the WBC (World Boxing Council). This bout will be held over 8 rounds.

This bout is promoted by Reyna Promotions of Corpus Christi. The promoters were looking for a first-class main event and landed a fight that is a solid television fight. The local ABC-TV affiliate (KSAT) in San Antonio will be in Corpus to broadcast this fight live and stream it across the internet. Female and male fight fans across the world that know these two pugilists will be tuning in to watch an action-packed fight as both warriors step forward and throw punches without grabbing and holding or running. Barrios and Satybaldinova are both guaranteeing a knockout.

“Selina has never been pressured in a boxing ring with a fighter like myself,” said the WBF Champ Satybaldinova. “I’m a pressure fighter that will take two punches to throw one bomb, and I feel I will be too strong for her. I do know I don’t have to look for Selina and have watched her fights. She stands and fights, which is made to order for me,”

Selina shoots back stating, “I have watched Aida’s videos and her comments about coming into my area of south Texas where I’m from, and saying she is going to knock me out, infuriates me. If it’s a war she wants, she just lit the fuse. No one is coming to south Texas to beat the “Aztec Queen” and we will find out how tough she is. It’s war time. Let’s do this.”

Undefeated Super lightweight contender and brother of Selina, Mario Barrios (21-0, 13 KOs), called his agents and promoters to let them know he is leaving camp, to go to this fight and is bringing a huge fan base with him. George Foreman’s former camp organizer is coming in to work the corner with Selina, and Deborah Hawkins, the representative for the NABF Female title fights, will be there to discuss a possible rematch for the championship, if the fight is as competitive as she thinks it will be.

GM3 Promotions from California, Keeppunching Entertainment from Louisiana, and CCC Entertainment from Corpus Christi, among other promoters are eyeing these two warriors for future shows and will also be in the audience along with other well-known agents, managers, and promoters. Eying this fight from long distance is DiBella Entertainment in New York as Lou DiBella is building a huge stable of top notch female fighters across the globe.

Great athletes, especially boxers and in this case female boxers, are very fascinating. It will be thrilling to watch two undefeated female athletes compete against each other, while the rest of the world of female fighters avoids the undefeated stars. The difference between the greats in boxing and the contenders are those who appear to be fearless and accept all challenges and how they respond to adversity. The greats put in persistent effort to excel while the contenders lose steam and regress by fighting easier competition on regular basis. This will be Barrios’ second undefeated opponent in only her 4th fight, and both have had very advanced amateur backgrounds. Satybaldinova, on the other hand, is coming into unfamiliar territory. That is what the greats do. Two potential greats meeting head to head early in their careers with each having the utmost confidence that they will win by KO.

Robert Hunt of GM3 Promotions: “I am glad we were able to come to an agreement to make this fight happen because I know Aida is going to win. Barrios is good but has never fought a fighter like Aida. One thing I know for sure is the fans are in for a great night of boxing and know this is a match-up that helps keep female boxing on the forefront.”

Colin Campbell of CCC Promotions: “The boxing community in south Texas is going bonkers over this fight and plans to set a record for attendance. It’s fights like this that creates raving fight fans.”

Ernest Reyna of Reyna Promotions: “This is my 3rd show and to be able to make this fight on this show is outstanding. Fighting as the co-main event is former heavyweight champion of the world, Oliver McCall. I am more excited about this show as a fan than a promoter. I’m pumped.”

Charles Campbell of CCC Promotions: “I travel the USA going to top fights. To think this is going to be in south Texas says a lot about the emergence of boxing here in Corpus Christi.”

Kerry Daigle of Keeppunching Entertainment: “In my 45 years of working in boxing, this may be one of the most fun matches to be made in professional female boxing. Kazakhstan vs Mexico. You can’t ask for better athletes to compete against each other. Two champions…. both undefeated…. going head to head.


« Pacquiao is 2:1 favorite to defeat Matthysse