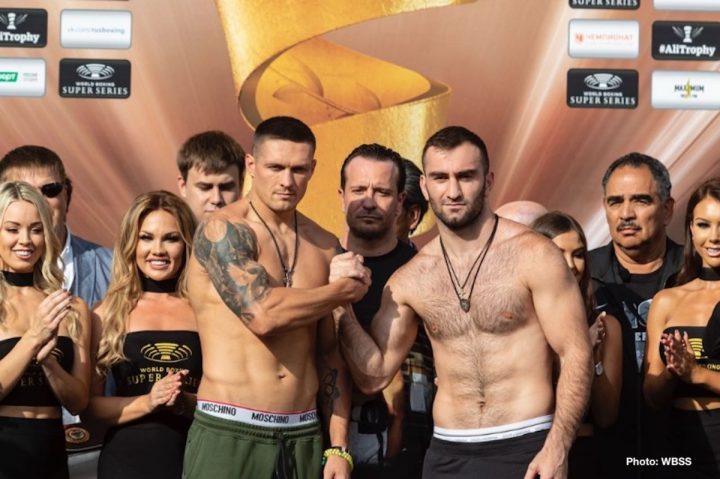 By Jeff Aranow: IBF/WBA cruiserweight champion Murat Gassiev weighed in at 198 ¼ pounds on Friday afternoon for his unification fight against unbeaten WBA/WBO champion Oleksander Usyk in their fight this Saturday night (live on KlowdTV in the US) at the Olimpiyskiy, in Moscow, Russia. Usyk (14-0, 11 KOs) also weighed in at 198 ¼ lbs. Gassiev looked a little bigger in terms of size when the two of them stood for a face off.

Although the 6’3 ½” Gassiev is listed as being half inch taller than the 6’3” Ukrainian Usyk, he looked shorter than him during the face off. Usyk looked a little bit taller. It was impossible to tell the difference between Usyk and Gassiev in terms of the power that they both possess. But it’s clear that Gassiev is the far more powerful puncher of the two. Usyk wins his fights by boxing, moving and focusing on volume punching.

”My birthday is the same as Muhammad Ali’s and when I heard about this tournament, I thought I would betray myself if I didn’t participate. Now I am looking forward to the final,” Usyk said at the weigh-in on Friday.

The Russian Gassiev, 24, will be the home fighter on Saturday night against the Ukrainian Usyk. It’s doubtful that Gassiev will benefit much from having the fight in Russia, because there will be a lot of Usyk’s fans in attendance to root him on. 70% of Gassiev’s victories during his seven-year pro career have come by knockout. Gassiev’s best chance of beating Usyk is to stop him, because he’s a great boxer and good at winning rounds with his hit and move style of fighting.

Usyk has very little chance of knocking Gassiev out, as he doesn’t sit down on his shots enough to get many stoppages. Usyk’s feet are usually looking to get him out of harm’s way when he throws a shot. He doesn’t put his body into his punches the way that power punchers do, as he’s constantly thinking of getting away before he’s countered. Like a lot of defensive artists, Usyk uses a lot of head movement and side to side upper body movement to avoid getting hit. What this means is Gassiev could have a tough time landing his power shots in the fight unless he targets Usyk’s midsection. That’s one area where he can be hit.

Mairis Briedis was able to find success landing head shots against Usyk by backing him up and trapping him againt the ropes in their fight in the semifinals of the World Boxing Super Series last January in Riga, Latvia. Briedis was only able to pressure Usyk part of the time though, because he was tired from chasing him around the ring. Briedis did an admirable job of forcing Usyk to fight, but in the end, he didn’t have good enough conditioning to get the ‘W’. Briedis showed how to beat Usyk by putting nonstop pressure on him. Usyk looked very beatable in the fight, and not the same guy that the boxing public had been anointing as the best fighter in the cruiserweight division. In the end, Usyk was better than Briedis, but not by much. The only thing that separated the two fighters was Usyk’s superior conditioning. A better conditioned Briedis would have likely won that fight. Whether that’s a sign of Usyk starting to show signs of age is unclear. From my perspective, I believe it was a case of Usyk not being able to handle a good pressure fighter. He’s always struggled against pressure fighters even when he was competing in the Olympics in 2008 and 2012. 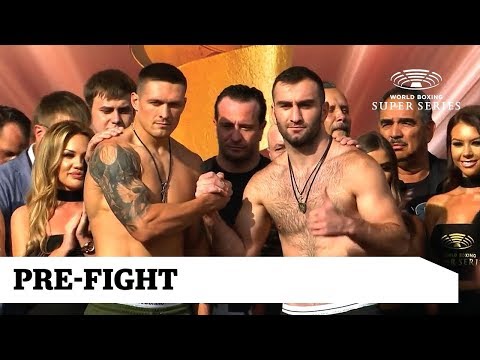 Usyk looks human when he’s being put under attack by a heavy puncher who doesn’t back off. Usyk will need Gassiev to back off for him to win this fight on Saturday night, because if he’s forced to deal with pressure for every second of every round, he won’t be able to move enough to win. As I mentioned, Usyk is a hit and run fighter. He’s not a slugger. Usyk won’t beat Gassiev if he’s forced to stand and fight him. If Usyk fights a stationary fight on Saturday, he’ll be worn down and knocked out within six rounds. Usyk isn’t built for that type of fighting, and he’s also not young enough to fight in that manner against the much younger 24-year-old Gassiev.

“I am very excited for my next fight,” Gassiev said on Friday in taking about his match tomorrow night. “I don’t know what will happen tomorrow night, I can’t see the future. I expect a hard fight and a good fight for all the fans.”

Both fighters have been polite with one another, refraining to talk trash and make bold predictions. Gassiev and Usyk prefer to do their talking inside the ring on Saturday night instead of trying to stir the pot by making predictions about the outcome of their fight. What we do know is these are the two best cruiserweight sin the division. The other top cruiserweights – Yunier Dorticos, Mairis Briedis, Marco Huck, Krzysztof Wlodarczyk and Dmitry Kudrashov – have been eliminated from the World Boxing Super Series competition.

They both looked in great shape at the weigh-in. On Saturday night, you can expect both of them to look much bigger after they’re fully rehydrated. Gassiev tends to look like a short, compacted heavyweight in the Rocky Marciano mold when he’s fighting. Usyk is more of a lighter, stream-lined fighter, who stresses movement in his fights to win. Usyk fights a lot like a young BJ Flores, but obviously with better results than him.

Gassiev and Usyk will be competing for the Muhammad Ali Trophy in the World Boxing Super Series cruiserweight finals (WBSS).

Gassiev must be more aggressive and physical with Usyk for him to win this Saturday night in their WBSS final, according to trainer Abel Sanchez. He says Gassiev (26-0, 19 KOs) must be physical like Usyk, Mairis Briedis and Yunier Dorticos, and he believes that he can get the job done thanks to his training. Gassiev, 24, can sometimes shutdown in fights and fight in a manner that allows his opponents to stick around late in his fights. We saw that in Gassiev’s matches against Denis Lebedev and Dorticos in which he didn’t go after them to try and knock them out. The result was they were able to take him deep into the fights. In other words, Gassiev gave them far too much respect and made the fights tougher than they should have been. Dorticos and Lebedev are good fighters, but they came apart at the seams when Gassiev stepped on the gas against them. Usyk is a good fighter, but he’s very vulnerable when facing pressure fighters, especially now that he’s beginning to show signs of age at 31. Mairis Briedis was able to put hands on Usyk and get the better of him in their World Boxing Super Series semifinals

“Usyk’s got skills,” Sanchez said. “He is a very good fighter. Dorticos, Usyk, Briedis … any of those guys, they are all very physical themselves so we have to be more physical. And I feel that our exercises and system make us a little stronger, a little better, a little faster than most guys,” Sanchez said. 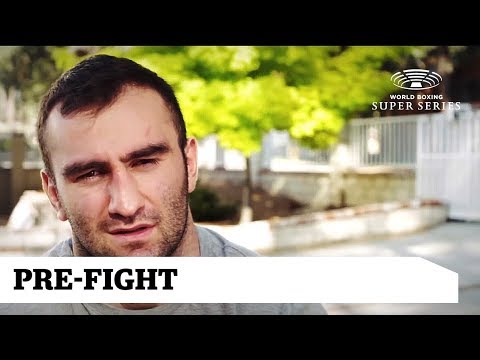 Usyk does have great skills, and there’s no question that if Gassiev isn’t able to apply enough pressure on him, he’s going to wind up losing on Saturday night. Gassiev cannot let Usyk fight his fight, because he’ll box his ears off if he lets him bounce around the ring unmolested for 12 rounds. Gassiev has to attack Usyk in the same way he did Yunier Dorticos in the 11th and 12th rounds of their fight last February in their WBSS semifinals fight in Adler, Russia. Gassiev put mad pressure on Dorticos in rallying in the final two wins to stop him. If Gassiev fights that way for the entire fight against Usyk, he’s going to force the issue one way or another. Usyk won’t be able to stand up to that type of fire power and pressure. Usyk have to change his game plan entirely for him to beat Gassiev, because he won’t be able to get the victory using a hunt and peck style if he’s getting clobbered constantly by the Russian fighter. Gassiev will make the rounds easy to score if he’s landing heavy blows each time he connects with a shot.

You can expect a much different fight from both guys than what we’ve seen from them in their previous bouts. Usyk and Gassiev will need to raise their game a notch for them to get the victory. Gassiev will not win the fight if he uses the same approach to the fight as he did against his last opponent Dorticos. The same goes for Usyk. He can’t use the same game plan that he employed against Briedis, because Gassiev is a far bigger puncher and he’ll hurt Usyk if he’s able to connect with the same amount of power shots. Gassiev has the better chance of adapting his game for this fight than Usyk. Gassiev is capable of putting more pressure on Usyk than vice versa. Usyk must use his feet for him to win. He can’t fight Gassiev’s game and expect to come out victorious by going to war for 12 rounds. That would be a crazy move for Usyk to fight that kind of fight against the younger, stronger Gassiev.

KlowdTV will broadcast the fight in the United States.