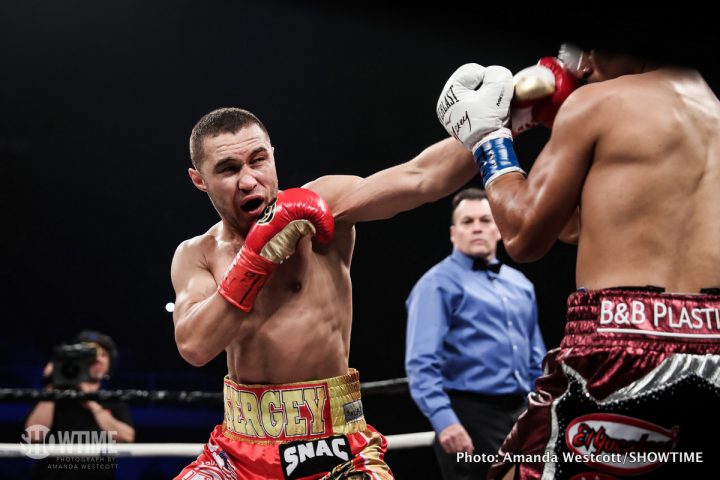 Former super lightweight champion Sergey Lipinets will battle Erick Bone in a 147-pound 10-round showdown live in primetime on FOX and FOX Deportes Saturday, August 4 from NYCB Live, home of the Nassau Veterans Memorial Coliseum in an event presented by Premier Boxing Champions.

The Lipinets vs. Bone clash will kick off the primetime broadcast, which begins at 7:30 p.m. ET/4:30 p.m. PT and is headlined by former 147-pound world champions Andre Berto and Devon Alexander in a 12-round showdown and former world champion Peter “Kid Chocolate” Quillin facing 168-pound contender J’Leon Love. Sensational junior middleweight prospect Joey Spencer will also be in action.

A special edition of Premier Boxing Champions on FS2 and FOX Deportes begins at 5:30 p.m. ET/2:30 p.m. PT and will feature unbeaten 2016 U.S. Olympian Antuanne Russell (6-0, 6 KOs) taking on Jose Arturo Esquivel (10-7, 2 KOs), plus, time permitting on the telecast, his brother Antonio Russell (11-0, 9 KOs) in an eight-round bantamweight fight. The FS2 and FOX Deportes telecast is headlined by unbeaten light heavyweight contender Marcus Browne taking on once-beaten Lenin Castillo in a 10-round match and a welterweight fight between former world champion Luis Collazo and Bryant Perrella.

Tickets for the live event, which is promoted by TGB Promotions, DiBella Entertainment and Mayweather Promotions, are on sale now. Tickets can be purchased online by visiting www.ticketmaster.com, www.nycblive.com, or by calling 1-800-745-3000. Tickets are also available at the Ticketmaster Box Office at NYCB LIVE. Group discounts are available by calling 516-231-4848.

The 29-year-old Lipinets (13-1, 10 KOs) is looking to bounce back from a unanimous decision loss to pound-for-pound star Mikey Garcia in an IBF 140-pund t title fight in March. Lipinets, who was born in Martuk, Kazakhstan and now lives in Beverly Hills, California, had won the vacant title against Akihiro Kondo last November and will be moving up to welterweight for the matchup against Bone.

Bone (20-5, 8 KOs) enters the match with Lipinets on a four-bout win streak since losing by split decision to Eddie Ramirez in 2017. The 29-year-old from Manabi, Ecuador is coming off a split decision victory over Cameron Krael on May 11. Bone is a tough veteran who has tangled with former world champions Shawn Porter and Chris Algieri.