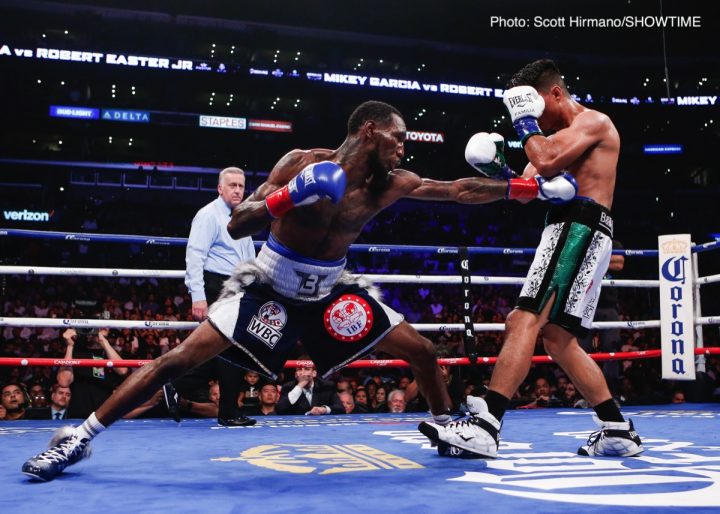 By Allen Fox: WBC lightweight champion Mikey Garcia (39-0, 30 KOs) brought in an average of 680,000 viewers with a peak of 725,000 viewers last Saturday night for his 12 round unanimous decision win over IBF champion Robert Easter Jr. (21-1, 14 KOs) in their unification fight on Showtime Boxing from the Staples Center in Los Angeles, California.

The co-feature bout on the card between former heavyweight world title challengers Luis ‘King Kong’ Ortiz (29-1, 25 KOs) and Razvan Cojanu (16-4-1, 9 KOs) averaged 583,000 viewers with a peak of 606,000 viewers. Ortiz knocked out the 31-year-old Cojanu in the 2nd round in an impressive performance. The 39-year-old Ortiz’s victory over Cojanu was clearly the best showing on the card, as Mikey didn’t look that great in winning a 12 round decision. Mikey didn’t dominate Easter the way that Ortiz did with Cojanu.

In the first fight of the televised portion of the Showtime card between light welterweight prospect Mario Barrios and Jose Roman, the fight averaged a respectable 462,000 viewers with a peak of 530,000. Barrios stopped Roman in the 8th.

Mikey’s ratings for the Easter Jr. were an improvement over the 618,000 viewers his previous fight against former IBF light welterweight champion Sergey Lipinets averaged last March. That fight had a peak of 689,000 viewers. The logical explanation for the increase in ratings is the fact that Easter Jr. has had a number of his fights televised on Showtime previously, and he’s fairly popular with hardcore boxing fans. In contrast, Lipinets was a virtual unknown with the casual boxing fans in the U.S, and he’s only had a tiny number of his fights shown in the States.

Mikey is now expected to move up to welterweight to take on IBF 147 pound champion Errol ‘The Truth’ Spence Jr. (24-0, 21 KOs). That’s the fight that Mikey says he wants next, and it’s expected to be televised on Showtime pay-per-view. Whether it does take place or not is open to question because it’s such a mismatch on paper in favor of Spence. Some boxing fans feel that Mikey was only name dropping Spence’s name for selfish reasons in trying to get attention on his unification fight against Easter Jr., as the fight had failed to traction with fans until Mikey started talking up a fight against Errol. Even with the name dropping of Spence’s name, Mikey’s ratings for the Easter Jr. fight barely did better than his previous fight against Lipinets.

Mikey still has one huge fight at lightweight against WBA champion Vasyl Lomachenko that he should be taking before he moves out of the division to face Spence. However, it might prove to be impossible for Garcia to make the fight with Lomachnenko, as his promoter Bob Arum mentioned recently that he would make an offer for the fight with Mikey. If he doesn’t accept it, he would move on. From the way that Arum was speaking that it might prove to be impossible for Garcia and Lomachenko to face each other.