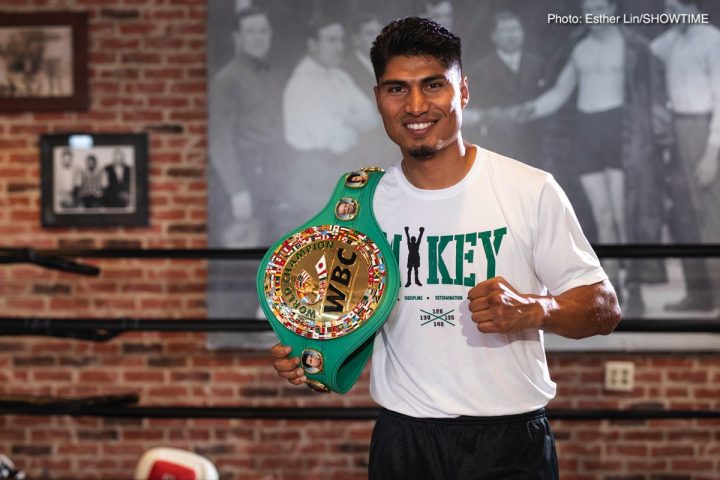 Mikey is hoping that Easter Jr. will give up his height and reach like he did in his last fight against the 5’6” Javier Fortuna, who he barely beat by a 12 round split decision on June 20 at the Barclays Center in Brooklyn, New York. Fortuna won the fight, but it wasn’t an easy fight for him. Easter Jr. barely won and failed to impress boxing fans.

Easter Jr. likes to slug it out with his opponents, and this bad habit puts him in harm’s way of his shorter opponents. Thus far, the 27-year-old Easter Jr. has gotten away with his brawling tactics, but he hasn’t faced anyone as talented as the 30-year-old Mikey Garcia during his six-year pro career, so it’s going to be a real test to see if he can get away with going to war against the California native.

Easter Jr’s best wins in his career have come against these fighters: Javier Fortuna, Denis Shafikov, Luis Cruz, Richard Commey and Argenis Mendez. Those are not great fighters. Easter Jr. barely beat Commey and Fortuna. Those were very difficult fights for him that could have gone either way. The 29-year-old Fortuna was knocked out by Jason Sosa in the 11th round in June 2016. Easter Jr. wasn’t able to successfully get the better of Fortuna in the same way that Sosa did.

”He likes to exchange punches and gives up the height and reach advantage at times. But he’s always in the fight. He’s always punching. He’s dangerous. He has power,” Mikey said of Easter Jr.

Mikey will need to use his punching power advantage against Easter Jr. if he’s to win the fight, because he’s not going to beat him in matching his high volume work rate. Easter Jr. is capable of throwing a massive amount of punches per round, and he has respectable punching power despite the fact that he looks rail thin with his build. Easer Jr. can do damage with his punches, especially if he’s able to land a lot of shots. What Mikey doesn’t need to do is get hit a lot of the 5’11” Easter Jr. because we could see an upset in this fight.

The wildcard in this fight is how Garcia will be impacted in coming down in weight from the 140-pound weight division where he’s fought his last two fights against Sergey Lipinets and Adrien Broner. Mikey captured the International Boxing Federation light welterweight title in defeating Lipinets by a 12 round unanimous decision on March 10 to win the IBF 140-pound title in San Antonio, Texas. The IBF surprised Mikey by quicky ordering him to defend his newly won IBF title against the tough as nails Ivan Baranchyk. Mikey didn’t fancy the fight against the 5-year-old hard-hitting Baranchyk, so he gave up the IBF title and

moved back down to the lightweight division to face Easter Jr. in a unification fight. With the hard time Garcia had in defeating Lipinets, it’s not surprising that he decided to give up his IBF light welterweight title rather than defending it against Baranchyk. That would have been a very hard fight for Mikey had he decided to keep his IBF belt.

Despite having the unification fight against Easter Jr. in front of him, Mikey has been receiving most of his attention in the last two weeks by telling the boxing media repeatedly that he plans on fighting IBF welterweight champion Errol Spence Jr. soon. The fans don’t know what to think because Mikey figures to be so far out of his league in a fight against Spence. Mikey didn’t look that great against Lipinets, who would be totally over-matched against a fighter like Spence. Mikey absorbed a lot of punishment against the 5’6” Lipinets. A fighter like the 5’9” Spence would likely be a bridge too far for Mikey. The money and the attention Mikey would receive in a fight against Spence would be good, but his chances of success would be slim at beat.

If Easter Jr. uses his height and reach for the entire bout, Mikey is going to have a lot of problems getting to him. Getting to a fighter with a six inch reach and five inch height advantage isn’t an easy thing to do. Mikey is going to need to run into a lot of shots for him to get near enough for him to land his power shots on Saturday night. Since Mikey’s best shot in his arsenal is a left hook, he’s going to need to get close enough for him to throw that shot. Mikey isn’t going to be able to land his left hooks from the outside because the punches won’t land from the distance.

“I have experience fighting a lot of different opponents, different styles, different heights. I’d say I’ll be prepared to do whatever it takes to win on the night of the 28th,” Mikey said.