Manny Pacquiao vs. Lucas Matthysse to stream on ESPN+ on 7/14 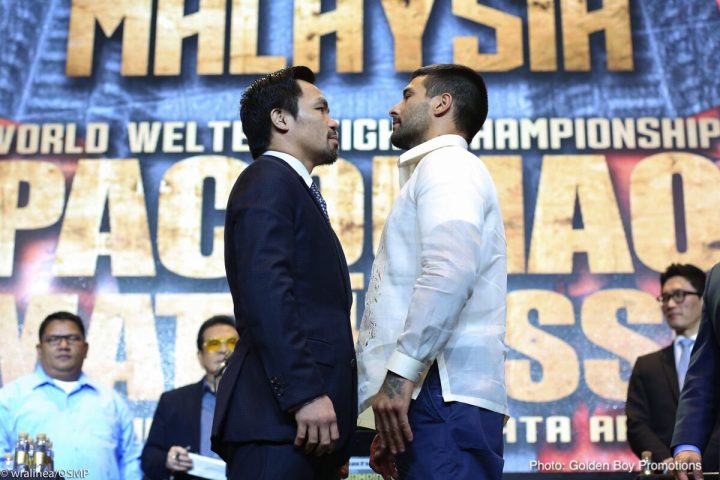 By Chris Williams: For U.S boxing fans interested in seeing the Manny Pacquiao vs. Lucas Matthysse fight on July 14, they’re going to need to come up with $5 to purchase the fight on ESPN+. This move by Top Rank to have the Pacquiao-Matthysse fight on ESPN+ means a lot of boxing fans won’t end up seeing the fight, because they won’t bother paying the $5 to see it. This could be the end for Pacquiao. If he gets knocked out by the hard-hitting Matthysse, it’s likely he’ll be hanging up his gloves for good. Golden Boy Promotions CEO Oscar De La Hoya is already predicting that Matthysse will be sending the 40-ish Pacquiao into retirement on July 14th.

If the fight were on regular ESPN, then it would be a massive amount of fans that would tune in to watch it. The main event is the only fight on the card that will interest the casual boxing fans, but you’re not going to get many of them that will be willing to pay $5 to see it on ESPN+.

Pacquiao won’t have his long-time trainer Freddie Roach working his corner for the Matthysse fight, as he’s been replaced by his former helper Buboy Fernandez. This was a strange move by Pacquiao’s part, because it doesn’t make sense for him to dump Roach in favor of his helper. Pacquiao has the wherewithal to hire a quality trainer to help him instead of using his helper Fernandez, who doesn’t have the same kind of background. This could end up backfiring on Pacquiao if he’s given the wrong corner instructions and loses the fight. Buboy looked lost in Pacquiao’s corner in his last fight against Jeff Horn last year in July in Brisbane, Australia. Pacquiao lost that fight by a 12 round unanimous decision after getting thoroughly roughed up by the 29-year-old Australian. Pacquiao will be fighting for the first time since then when he steps inside the ring to face Matthysse.

The 35-year-old Matthysse (39-4, 36 KOs) will be defending his WBA World welterweight title against the former eight division world champion Pacquiao (59-7-2, 38 KOs) on July 15 in Malaysia. The fight will be shown in the U.S on July 14. The bout will be taking place at the Axiata Arena in Kuala Lumpur, Malaysia. It’s late in the game for the 39-year-old Pacquiao to be challenging for a world title. For one, he did nothing to deserve this time shot against Matthysse unless you count losing his last fight and sitting outside of the ring for one year as earning the title fight. Pacquiao clearly doesn’t deserve to be fighting for a world title

“I am very happy that all of my fans in America will have a chance to watch my next fight on ESPN+, and I am looking forward to putting on a show,” Pacquiao said via ESPN.com. “Matthysse is a great opponent. I am training with all of my heart because I want to be champion again.”

As I mentioned, I don’t know about how many American boxing fans that will bother paying the $5 to see the fight on ESPN+. For a lot of U.S fans, they’re reluctant to start paying $5 a month to see fights on ESPN+ when many of them are already paying close to $200 per month for their cable bills. When you add another $5 to see streaming fights on ESPN+, I see it as not something the fans are interested in doing in large numbers right now. One problem that is causing a lot of boxing fans not to want to purchase the ESPN+ app is the narrow focus of the fights they can watch on the network. A lot of the top fighters aren’t shown on ESPN+ like Gennady Golovkin and Saul Canelo Alvarez. The fighters that the boxing fans do end up seeing are guys like Vasyl Lomachenko, Gilberto ‘Zurdo’ Ramirez, Jose Ramirez, Alex Saucedo and Terence Crawford. Most of those guys generally are matched softly by Top Rank, so it’s not compelling for a lot of fans to purchase ESPN+. There needs to be better fights for the fans to want to pay $5 extra to see boxing. Paying extra for a premium channel is worth it to some fans because it enables them to see the latest movies on HBO and Showtime. It’s worth it to the fans to pay extra for one of those networks.

Matthysse isn’t the same fighter he once was, but he’s still a huge puncher and more than powerful enough to take out the aging 39-year-old Pacquiao if he can connect with his shots. Pacquiao is no longer the elusive fighter that he once was during his best years, which means Matthysse should have little problems landing his big shots on him. Pacquiao is still a good fighter, but his chin is vulnerable and he’s always had problems taking body shots. By this point, Matthysse is already well aware that Pacquiao can be hurt with body shots, so you can expect him to go after the Filipino star’s body on July 14.

Matthysse recently won his WBA secondary 147 lb. title last January on the 27th in stopping the highly rated #1 Tewa Kiram in the 8th round. Matthysse made the little known Kiram look better than he actually was, as he was a guy that likely would have been knocked out in the 1st round by Errol Spence Jr. Matthysse, 5’6 ½”, struggled with the height, reach and the jab of Kiram until took the fight to him and knocked him out in the 8th. Not long after the fight, Pacquiao setup a fight against Matthysse. Pacquiao could have gone after a title shot against IBF welterweight champion Errol Spence, but instead he chose to fight the most vulnerable of the champions in Matthysse.

The initial plan was for Pacquiao vs. Matthysse to be televised on ESPN pay-per-voew. However, Manny Pacquiao Promotions reportedly missed PPV deadlines, which resulted in the fight being moved to ESPN+. Pacquiao’s promoter promoters at Top Rank are in charge of the American distribution of the Pacquiao-Matthysse fight. It would have been interesting to see how many PPV buys the Pacquiao vs. Matthysse fight would have generated if it had ended up on ESPN PPV rather than on ESPN+. It’s not likely that too many boxing fans would have been eager to dig deep in their pockets to come up with the money to see the inactive 39-year-old Pacquiao coming off of a loss to Jeff Horn and a one-year layoff to face Mattysse on ESPN PPV. It’s not as if the undercard of the Pacquiao-Matthysse card is stocked with talent. It’s basically a skeleton crew of little known opposition matched up with equally obscure opponents. There are no notable names in the entire Matthysse vs. Pacquiao undercard that would attract interest from the U.S boxing fans to purchase the card on ESPN PPV if it had ended up being sold to the fans.

Putting the Pacquiao vs. Matthysse fight on ESPN+ will interest from boxing fans enough to get them to pay the $5 to see the fight but it’s still very, very unlikely that fans will do it in high numbers. It’s just not a good enough fight for fans to want to plunk down $5 to see it. The fight is way too late in the careers of the two fighters for it to attract a lot of fans to purchase it on ESPN+. If the contest had taken place six years ago before Matthysse’s loss to Danny Garcia, then there might have been some fans willing to purchase it on pay-per-view, but definitely not now. You can argue that the Pacquiao vs. Mathysse fight should be shown on regular ESPN so that the fans can easily see it without them having to jump through hoops of purchasing the ESPN+ app.

On the undercard of Pacquiao vs. Matthysse, little known Jhack Tepora (21-0, 16 KOs) will be fighing Edivaldo “Indio” Ortega (26-1-1, 12 KOs) for the interim featherweight title in the co-feature bout. Also on the card, Moruti Mthalane (35-2, 24 KOs) battles Muhammad Waseem (8-0, 6 KOs) in a fight for the vacant IBF flyweight title. Unfortunately none of these four fighters are well-known enough to create interest from the U.S boxing public to want to purchase the Pacquiao vs. Matthysse fight on ESPN+. There’s not much of anything on the Matthysse vs. Pacquiao undercard to make fans want to pay for the $5 to get the ESPN+ app. Golden Boy should have volunteered to have their popular social media fighter Ryan Garcia fight on the undercard. Garcia would have attracted fans to pay to see the card with his social media presence.

In a more appealing fight, interim WBC light welterweight champion Regis Prograis (21-0, 18 KOs) will be defending his title against unbeaten Argentinian Juan Jose Velasco (20-0, 12 KOs) on regular ESPN at 7:00 p.m. ET. Don’t be surprised if the Prograis vs. Velasco fight brings in better ratings than the Pacquiao-Matthysse fight. Prograis is young, talented, relevant and active with his career. Pacquiao is older, past his best and is coming off of a long layoff. Prograis will be getting a quick ‘W’ over Velasco before entering the World Boxing Super Series tournament in the fall. For the boxing fans that tune in to see the Prograis fight on July 14, they’ll get a glimpse of the likely winner of the WBSS 140 lb. tournament. On the undercard of the Prograis vs. Velasco fight, lightweight prospect Teofimo Lopez (9-0, 7 KOs) will be fighing William Silva (25-1, 14 KOs) in a 10 round fight.