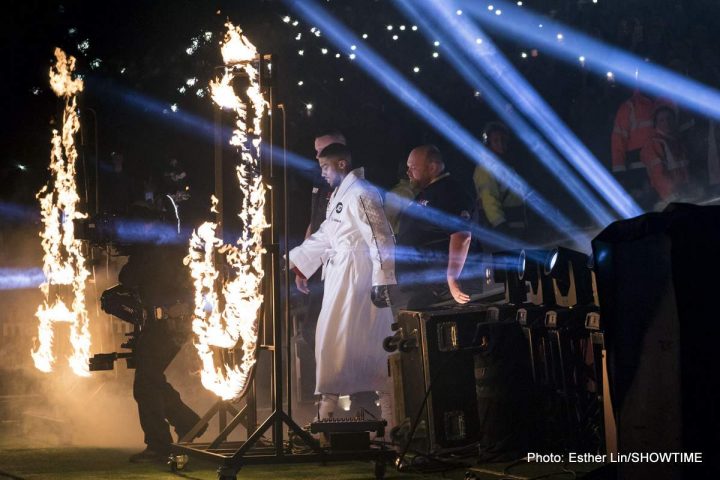 By Scott Gilfoid: Promoter Frank Warren thinks Anthony Joshua is potentially making a huge mistake in choosing to face Russian Alexander Povetkin instead of facing WBC heavyweight champion Deontay ‘Bronze Bomber’ Wilder in a unification fight. Warren sees the Povetkin bout being a risky one for Joshua that could go badly for him. If Joshua loses to Povetkin, then the Wilder fight won’t be as big as it would have been.

It’s very strange how Joshua and his promoter Eddie Hearn were so comfortable at walking away from the $50 million offer that Wilder’s management gave AJ for a fight in the U.S. Joshua chose to walk away from the $50 million, and now he’s going to be getting a fraction of that money in a dangerous fight against Povetkin (34-1, 24 KOs) in late September at Wembley Stadium in London, England.

”What happens if AJ loses? Or what happens if Wilder slips up against whoever he faces next?” Warren said in his column at dailystar.co.uk. ”A massive money fight is down the drain and, more importantly, the fans miss out on what could have been a blockbuster.”

I totally agree with Warren. What a waste it’ll be if Joshua gets knocked cold by Povetkin. Joshua and Hearn will be crying large crocodile tears if Povetkin knocks him clean out in September. All that good clean cash that Joshua could have gotten against Wilder would be totally gone from that point. You can’t dismiss the possibility that Povetkin could win this fight, as he just finished chopping down the taller 6’8” David Price in five rounds on March 31.

Povetkin, 6’2”, was able to reach Price’s chin to knock him out. Believe me; if Povetkin was able to reach the stork-like Price’s chin, then he sure as heck is going to be able to reach the 6’6” Joshua’s chin. It won’t matter how much bodybuilding muscles Joshua is carrying around on his frame. If Povetkin connects with one of his powerful left hooks or fight hands on the chin of Joshua, it’s going to be lights out for him. Joshua’s loyal boxing fans aren’t going to be able to cheer him into being cogent after he’s flattened by Povetkin. Joshua is making a blow it move by fighting Povetkin instead of taking the money fight against Wilder.

Warren thinks Joshua and Wilder should fight each other two or three times, and then face Tyson Fury. It’s great idea. Who needs Povetkin? There’s no money in that fight. There’s only risk for Joshua, as his chin and his stamina are both horrible. If Povetkin takes the fight to Joshua, he could take him out with one of his power shots. Of course, if Joshua has a referee that prevents inside fighting like he had in his recent fight against Joseph Parker, then it will be next to impossible for Povetkin to have any chance of winning. I hate to say it but you can’t rule out a referee working the Joshua-Povetkin fight like the one that worked the Parker-Joshua contest.

Warren doesn’t understand how Joshua could turn down so much money for a fight against Wilder, and a lot of boxing fans are equally baffled by that move. Is Joshua so afraid to fight Wilder in the U.S that he would turn down a guaranteed $50 million? It’s not as if this fight has any chance of going to the score cards, so there would be little chance of a controversial decision. It just looks to a lot of boxing fans that Joshua is just plain scared of getting inside the ring with Wilder without everything in his favor in terms of the crowd, venue, rematch clause and whatever else you can think of.

”It is strange for a British fighter to turn down such huge sums and you have to wonder why they have decided to do so,” Warren said.

Warren says he has a big card planned for September 15 at the O2 Arena in London, England. Warren isn’t saying who will be the headliner for the card. My guess is WBO middleweight champion Billy Joe Saunders will be back inside the ring making a defense of his strap. Saunders recently pulled out of his June 23 fight against Martin Murray, so he’s an obvious name that could be the top of the bill on September 15. Saunders vs. former IBF super middleweight champion James ‘Chunky’ DeGale is a match that is rumored as a possibility. That would be an awful one potentially due to how over-the-hill DeGale has looked recently. Saunder’s defensive style of fighting could make that fight a real eyesore for the boxing public. Saunders looks good against aggressive fighters, not defensive slappers like DeGale. That fight would likely be a dreadfully bad one. I’m assuming that Saunders would need to pack on some pounds and move up to super middleweight in order to make the fight happen because it would be extremely difficult for DeGale to shed eight pounds to get down to 160 to challenger Saunders for his World Boxing Organization middleweight title. Saunders has become totally unreliable lately with the way he’s been pulling out of fights in the last couple of years due to injury problems. It’s surprising that the WBO hasn’t gotten tired of the constant injuries and stripped Saunders already of his title, because he’s had a lot of different injury problems. If Saunders is the big announcement for Warren’s September 15 fight, I hope he’s got a good backup option in case he pulls out of the card with another injury. As often as Saunders is getting injured, he’d be better off if he only trained lightly for his fights. At least if he took it easy during training camp it would increase his chances of making it to his fights without having to postpone or cancel them. Could it be light heavyweight contender Anthony Yarde back in action? I can’t imagine it being Yarde, because he’s not a big star.

Manny Pacquiao vs. Lucas Matthysse to stream on ESPN+ on 7/14 »