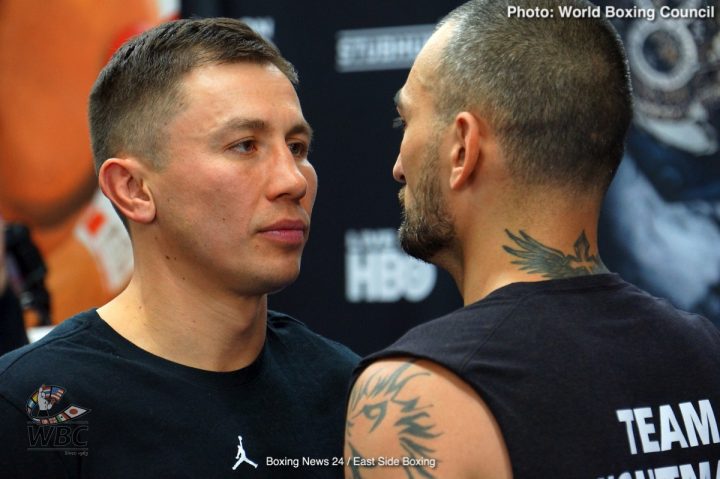 By Sean Jones: Vanes Martirosyan didn’t take too kindly the recent comments from Saul Canelo Alvarez when he said that middleweight champion Gennady ‘GGG; Gokovkin had no opponent for his last fight on May 5th in Carson, Caifornia.

Junior middleweight contender Martirosyan (36-4-1, 21 KOs) stepped in and faced Golovkin on three weeks’ notice and was promply destroyed in two rounds at the StubHub Center. Before that fight, Martirosyan hadn’t fought in two years since his 12 round unanimous decision defeat to Erislandy Lara in May 2016.

Here’s what Martirosyan had to say about Canelo Alvarez on his social media site:

”Canelo You B–ch you run the whole fight and cry like a b—ch that you won, then take Roids for Rematch. I fight 2 weeks’ notice show up to fight like a man CLEAN!!!! you know me.”

Canelo didn’t fight in the style that he was talking about fighting. He got on his bike and was fleeing Golovkin for much of the contest. Canelo would land a couple of shots here and there, but he would always take off running immediately afterwards. Obviously it looks bad that Canelo tested positive for clenbuterol last February while preparing for the rematch with Golovkin. That didn’t help Canelo’s popularity.

Well, if Canelo needs an opponent after he faces Golovkin next September, he can count on Martirosyan being a great option for him to try and pick up the pieces if he loses badly to GGG. Since Canelo sees Martirosyan as a nothing opponent, then he should have no problems beating him. That would be a good match-up as long as Martirosyan isn’t negatively impacted by his knockout loss to Golovkin. I suspect that Martirosyan would give Canelo a lot of problems in lasting the full 12 rounds. I can’t see Martirosyan being given the win over Canelo, especially if the fight takes place in Las Vegas, but he could definitely give him a ton of problems. I think it would be a close fight. I rate Martirosyan as a tougher opponent for Canelo than Gary ‘Spike’ O’Sullivan or David Lemieux.

Martirosyan is really going after Canelo by saying that he ran from Golovkin the entire fight last year , and then took a performance enhancing substance for the canceled rematch on May 5. Canelo did appear to run from Golovkin in their fight on September 16 last year. Canelo was not interested in standing his ground and fighting him. There’s obviously no rule that fighters are required to stand and fight against their taller, more powerful opposition, but you’re expected to stand your ground at least the majority of the time when you’re challenging a three-belt middleweight world champion like GGG. Canelo fought like he wasn’t a challenger. He fought more like he was the world champion looking to preserve a lead than someone that was attempting to rip the titles away from Golovkin. Of course, the judges that worked the fight seemingly didn’t care that Canelo was the challenger. They gave him a 12 round draw despite the fact that he appeared to come up short by four rounds against Golovkin.

”Yes, I did see the fight in May,” Canelo said about the Golovkin vs. Martirosyan fight. ”Of course I would. He’s the opponent that I have at hand and that’s my job to watch him. As far as what I thought about the fight, look, you can’t call that a fight. You have no opponent. That’s not my level of opponent. I didn’t pay attention as far as that being a fight,” Canelo said.

It’s interesting that Canelo is dismissing Martirosyan as not being his “level of opponent,” when in the

last four years he’s fought Julio Cesar Chavez Jr., Amir Khan, Alfredo Angulo, James Kirkland and Liam Smith. All of those fighters are unquestionably below Martirosyan in talent. Chavez Jr., Angulo and Kirkland are shot fighters. Khan is a welterweight with a history of being knocked out viciously by his opponents. Liam Smith is considered a former light middleweight paper champion. Canelo has only faced five good opponents in his career and they are as follows: Austin Trout, Gennady Golovkin, Miguel Cotto, Erislandy Lara and Floyd Mayweather Jr. Of those fights, Canelo is fortunate not to have been beaten in all five of those fights. Mayweather beat him, and Golovkin and Lara appeared to do more than enough to beat Canelo. Trout fought well enough to deserve a draw or a victory in the eyes of a lot of boxing fans.

Martirosyan had this to add about Canelo:

”Let’s Make this s–t Clear about Canelo Him and his team been talking s–t about me I’m a fighter I don’t respect Canelo im responding to His Comments made by his team about me. So Haters 🖕🏻🖕🏻🖕🏻🖕🏻🖕🏻 Offf!! “

Canelo’s promoter Oscar De La Hoya was still calling him a champion at their press conference last week despite the fact that he vacated his WBC middleweight title two years ago when the World Boxing Council ordered him to defend it against Golovkin. Ring Magazine recently stripped Canelo of his Ring Magazine title. The title is now vacant with The Ring, but Golovkin is rated No.1. Canelo is no longer rated in the top 10 in The Ring’s ratings at middleweight.

”Canelo has the bigger piece of the pie, and because he’s the champion, he’s the draw,” said De La Hoya. ”He’s the one that brings in the people. On September 15, you will have millions and millions of fans supporting Canelo and supporting GGG as well.”

If the prediction from De La Hoya about “millions and millions of fans” supporting Canelo and Golovkin for their rematch, then the fight will do huge numbers of f pay-per-view buys on HBO PPV. However, given the lack of excitement of the recent Facebook news conference for the Canelo-GGG II rematch, it’s not looking good for the rematch. On social media, a lot of boxing fans are already saying they have no interest in purchasing the fight again on HBO PPV due to Canelo testing positive twice for clenbuterol and Golovkin being robbed by the judges in Las Vegas in their fight last year at the T-Mobile Arena. The rematch already has two strikes against it right off the bat with the controversial scoring of the first fight and Canelo’s two positive tests for the potent performance enhancing substance clenbuterol. The third strike is Canelo’s decision not to meet with Golovkin for face-to-face meetings until the final week of the fight. Talk about crippling a fight. It’s surprising that Canelo would make the decision not to take part in face to face meetings with Golovkin to help make the rematch a big success. It’s doubtful the second fight will do as well as the first fight. The only one that seems to be putting any real effort in selling the second fight is Golovkin’s trainer Abel Sanchez, but he’s not being helped by GGG, who sat stone-faced during the Facebook news conference rather than using the opportunity to tear into Canelo and tell the boxing public what he thinks of him.

GGG is a 2:1 favorite to defeat Canelo in the rematch, according to Bovada. They have Golovkin favored by the odds -190 to Canelo’s +155.

”We will Canelo be in different shape? Will he be in better shape and will he be stronger, faster? He’s going to be all that and then some,” De La Hoya said.

It’s hard to imagine that Canelo is going to be in better shape than he was for the previous fight with Golovkin, as he looked like a Greek statue last September. Before that fight, Canelo was never that muscular before. All of a sudden, Canelo looked like he went on a bodybuilding kick and packed on a lot of muscles in a short period of time. Canelo in getting in better shape for the rematch won’t be easy for him to do because he’s never had great stamina during his career in any of his fights. Now that Canelo is carrying around extra muscle weight in order to fight at middleweights, he’s going to be naturally putting more of a burden on his cardiovascular system, which clearly showed serious limits in his fight against GGG last time out. For Canelo to ease the burden he’s putting his heard under, he’s going to need to work hard on his cardio to lose some of the extra muscle he’s packed on. The thing is once Canelo does that, he’ll lose the strength he had in the previous fight. If he loses that, then Golovkin is going to walk him down and knock him into oblivion.

”They haven’t seen Canelo the way they are going to see him September 15,” De La Hoya said. ”We have seen GGG. We know what he does. All he does is come forward and fights and that’s it. Canelo has many other things he does,” De La Hoya said.

Canelo really needs a win over Golovkin without controversy for him to get back the popularity he had before the fight. The way that Canelo avoided the Golovkin fight for two years before finally facing him in 2017 was bad enough. But then you add in the controversial draw that Canelo didn’t appear to deserve, the two positive tests for clenbuterol and now his decision not to have face offs with Golovkin. It looks so bad. Canelo can turn things around with his boxing career if he soundly beats Golovkin in their rematch on September 15. It’s just that’s going to be extremely tough for him to do that because he didn’t show the kind of talent the last time he fought him that would suggest that he can beat Golovkin.


« Manny Pacquiao vs. Lucas Matthysse to stream on ESPN+ on 7/14