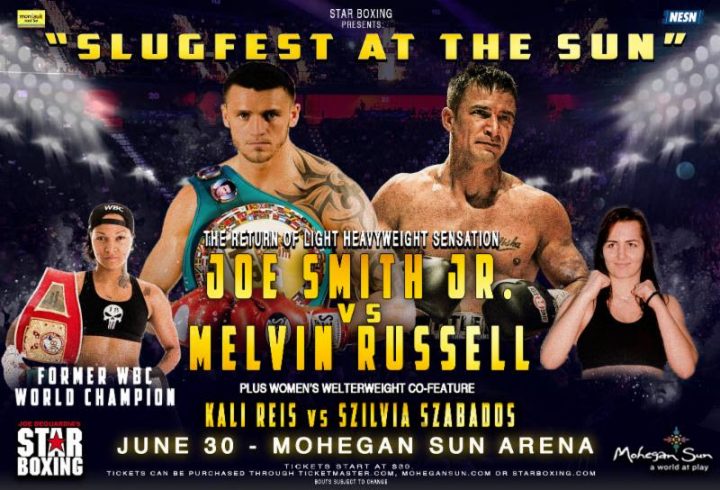 By Jim Dower: The powerful light heavyweight contender Joe Smith Jr. (24-2, 20 KOs) looked good in stopping an over-matched Melvin Russell (11-4-2, 7 KOs) in the 1st round last Saturday night at the Mohegan Sun Casino in Uncasville, CT. Smith, 28, dropped Russell hard twice in the round before the fight was finally stopped by the referee. The official time of the stoppage was at 1:45 of round one.

This was a confidence booster for Smith Jr., who had lost his previous fight to Sullivan Barrera by a 10 round unanimous decision last July. Smith suffered a jaw injury in the Barrera fight that hampered his ability to stand and fight. It was a major accomplishment for Smith Jr. to have even gone the distance in that fight. It took Smith Jr. almost an entire year to come back from the injury. In Smith’s two prior fights before the loss to Barrera, he’d stopped boxing great Bernard Hopkins and Andrzej Fonfara in back to back fights.

It was a good win for Smith Jr. in stopping Russell last night, but it’s impossible to know how he’ll do against the better fighters in the light heavyweight division.

Smith Jr. now wants to challenge for a world title against WBO light heavyweight champion Sergey ‘Krusher’ Kovalev. Whether Smith Jr. gets the fight against the 35-year-old Kovalev will be up to Main Events, the promoters for the hard-hitting Russian. Kovalev will be defending his title against unbeaten contender Eleider Alvarez on August 4 in Atlantic City, New Jersey.

“I was disappointed in that [Barrera] fight,” Smith said moments after stopping Russell in the 1st round last Saturday night. “I felt I could’ve gotten him out of there, but with the injury to the jaw I was at 40 percent. I’ll take what’s available [next] but I think Kovalev is the best out there. I feel like my conditioning will be an advantage in that fight.”

It’s quite possible that Kovalev and Main Events might choose to take the fight with Smith Jr., as he’s flawed and he doesn’t possess the same pedigree as contenders like Marcus Browne. Of course, the boxing world would prefer to see Kovalev in unification fights against 175lb champions Dmitry Bivol, Artur Beterbiev and Adonis Stevenson. It’s unlikely that any of those fights are going to take place in 2018 unfortunately for the fans.

Smith Jr. might be an option if Kovalev isn’t interested in taking the risk of fighting the other champions in the division. Kovalev said this week that he’d like a third fight against Andre Ward, who beat him twice in 2016 and 2017. However, Ward likely won’t be interested enough in a third fight with Kovalev to come out of retirement. If Ward does come back, it’s going to be against a bigger name. The boxing public has no interest in seeing Kovalev and Ward fight again after the controversy surrounding their fights.

“We wanted that fight now,” Smith Jr’s promoter Joe DeGuardia said about the Kovalev title shot. “Now we’re looking for it in the fall.”

It would be nice if Smith Jr. can get a crack at Kovalev. That would be a major test for Smith Jr., and a much more dangerous fight than his matches against Barrera, Fonfara and Hopkins. Smith Jr. would need to be ready for war to have a chance against Kovalev. Smith Jr. has the power to beat Kovalev. The only question is whether he has the chin and the right game plan to win.

Smith Jr. needs to fight better opposition than Russell for him to get the attention of the fans. If Kovalev isn’t interested in facing Smith Jr. yet, then his promoter should look to setup a rematch with Barrera or go after some of the other top contenders like Juergen Braehmer, Anthony Yarde, Marcus Browne, Karo Murat, Badou Jack or Jean Pascal.